Save articles for later

Add articles to your saved list and come back to them any time.

The Great Ocean Road region is set to lose at least 5000 jobs over coming months as COVID-19 deals a savage economic blow to the local tourism industry.

New research commissioned by the Great Ocean Road Regional Tourism group lays bare the calamitous impact of coronavirus on the tourism magnet’s travel sector, and predicts it could take until 2023 to rebound. 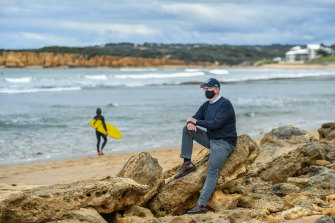 The report by Decisive Economics estimates more than 200 businesses along the road are at risk of disappearing by June next year.

Tourism is a major employer in the Great Ocean Road region, accounting for $1.9 billion in visitor spending in 2018-19.

The report warned the full economic impact of the COVID-19 pandemic on tourism has yet to be realised, with JobKeeper payments wound back in Victoria from this month. 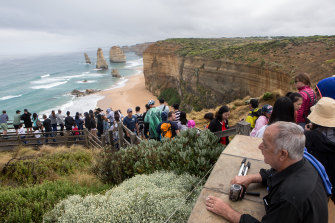 “Unemployment due to falls in visitor spending in the Great Ocean Road region is expected to grow rapidly from October,” it said.

In the June quarter of 2020, spending by domestic and interstate visitors in Victoria fell by 93 per cent and 78 per cent respectively compared with the same period last year, the report says.

“The recovery will require a level of collective state and federal government support which is commensurate with the scale and importance of the visitor economy to the region, Victoria and Australia,” he said.

The tourism group wants governments to accelerate support for both private and public infrastructure projects planned for the region, nominating the 12 Apostles as the priority to build “world-class” facilities.

Developments of varying sizes have been proposed along the Great Ocean Road, often prompting a fierce protest from residents.

But Mr Kayler-Thomson said there was also cause for optimism amid the economic gloom.

“The region has been Victoria’s most popular visitor destination and has been resilient in the face of past external shocks.” 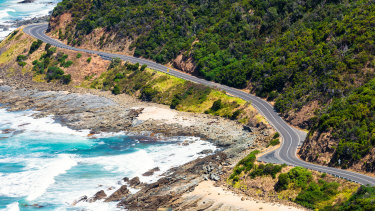 New analysis shows the Great Ocean Road region may take until at least 2023 to fully rebound from the impact of the pandemic. Credit:iStock

Under the best-case scenario, Melburnians would be free to travel within Victoria later this month, state borders would open just before Christmas and a vaccine available from April next year – allowing international tourism to resume.

It found the Surf Coast Shire was most exposed to the tourism downturn, with 46 per cent of jobs connected to the visitor economy and 47 per cent of businesses accessing JobKeeper.

The report forecasts a backlog of visitor trips to family and friends in the region when restrictions are lifted but tourism will be concentrated on the weekends.

“Holiday travel on longer breaks is expected to be particularly discouraged by economic pressures and a common reduction in recreation leave available, after forced leave taking during the closedowns.”

“Tourism is vital to many local economies and we are working to ensure operators are in the best position to recover from the shocks of the health crisis,” he said.

The report found “profitless volume” would be another problem, with domestic day trippers and intrastate overnight visitors less likely to indulge in more expensive experiences than interstate and international travellers.

Strong growth may return after international borders reopen due to Australia’s reputation for safety and good governance, which will have been enhanced compared with the US, UK and Europe where coronavirus has been far more widespread.

However, the recovery is likely to begin in 2023 in a best-case scenario.

Laurence Wade, who runs two accommodation units in Tanybryn near Apollo Bay, said his businesses roared back to life once residents of regional Victoria were allowed to travel.

He expected a similar spike in demand once Melbourne’s restrictions were lifted. “But I think that’s a short-term hit,” he said.

Mr Wade said many people had already lost local tourism jobs but he believed the sector would bounce back after a few years.

Get our Coronavirus Update newsletter for the day’s crucial developments and the numbers you need to know. Sign up to The Sydney Morning Herald’s newsletter here and The Age’s here.