Keir Starmer admitted he had spoken to Angela Rayner over her ‘Tory scum’ diatribe – as he admitted he and his deputy had a ‘different style’ of politics.

The Labour leader refused to say what they had discussed in the aftermath of Ms Rayner’s Saturday diatribe at a conference fringe event in Brighton.

But he repeated that he would not have used the same remarks about the Tories, after she claimed the description was commonly used in the North.

In her late-night rant on Saturday, Ms Rayner said she was ‘sick of shouting from the sidelines’ at ‘a bunch of scum, homophobic, racist, misogynistic, absolute pile of… banana republic… Etonian… piece of scum’.

She later doubled down, tweeting tweeting examples of the PM’s controversial remarks from the past, complaining that critics should be less ‘concerned with my choice of language’.

Speaking to Channel 5 News in Brighton, the Labour leader said: ‘I talked to Angela, yes.

‘I’m not going to disclose to you our private conversation, I talk to Angela several times a day.

‘I talk to Angela all the time, we have different styles Angela and I, I wouldn’t have used the words that she used.

‘Angela and I talk everyday – of course we have huge agreements and disagreements.’ 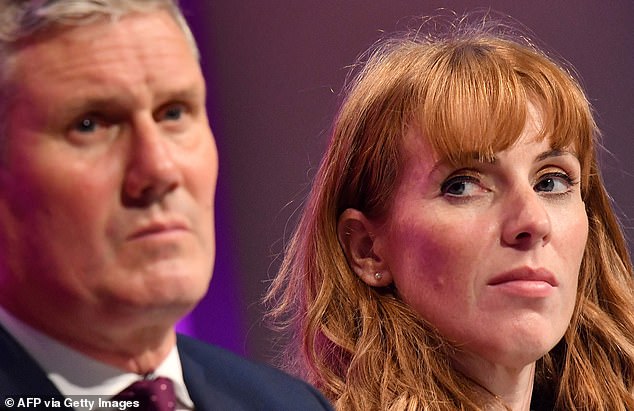 The Labour leader refused to say what had been said in the aftermath of Ms Rayner’s Saturday night rant at a conference fringe event in Brighton.

Ms Rayner has resisted calls from the Tories to apologise for her diatribe against Boris Johnson and the Cabinet.

She has challenged Mr Johnson to sit down with her and apologise for his own ‘racist, homophobic and sexist’ comments before she says sorry for her attack on Conservatives.

She tweeted that people ‘seem to be far more concerned with my choice of language’ than the Prime Minister’s own past comments.

‘I’m very happy to sit down with Boris. If he withdraws his comments and apologises, I’ll be very happy to apologise to him,’ the Ashton-under-Lyne MP added.

Earlier she had attracted some support from former Tory John Bercow. The ex-Speaker, who has joined the Labour Party, suggested people should not get too upset by her remarks.

He said: ‘I wouldn’t have used that term, but I think that people are passionate.

‘I know Angela well and she’s a passionate person and she believes in her values and she feels very, very angry about what is being done to this country by a Conservative Government.

‘Do I think Angela Rayner, should be damned to perdition for that one comment?

‘Absolutely not. I think Angela Rayner is a damn good person, she has got strong and good values.

‘I wouldn’t have used that expression but I don’t think we should get on our moral high horses about it.’