WikiLeaks founder Julian Assange has been stripped of his citizenship by Ecuador over claims of unpaid fees and false documents.

Ecuador’s justice system made the decision after a claim from the country’s foreign ministry based on multiple inconsistencies, different signatures, the possible alteration of documents and unpaid fees, among other issues in Assange’s naturalisation letter.

Authorities said it was standard practice to revoke citizenship where it had been received fraudulently, with false documents, or through concealing relevant facts.

Carlos Poveda, Assange’s lawyer, said the decision was made without due process and Assange was not allowed to appear in the case.

‘On the date [Assange] was cited he was deprived of his liberty and with a health crisis inside the deprivation of liberty centre where he was being held,’ Poveda said. 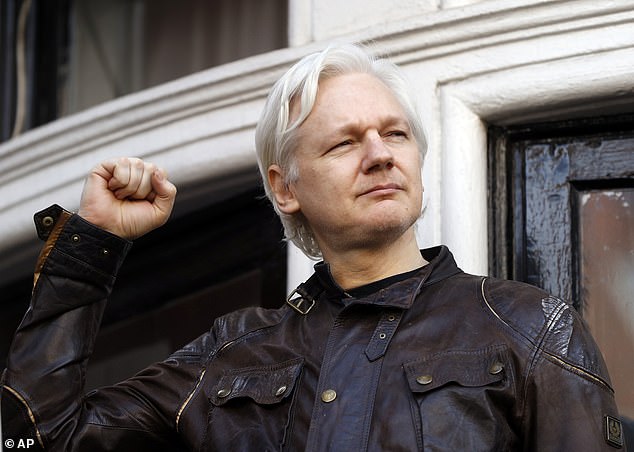 Ecuador has revoked the citizenship of Julian Assange, the founder of WikiLeaks who is currently in prison 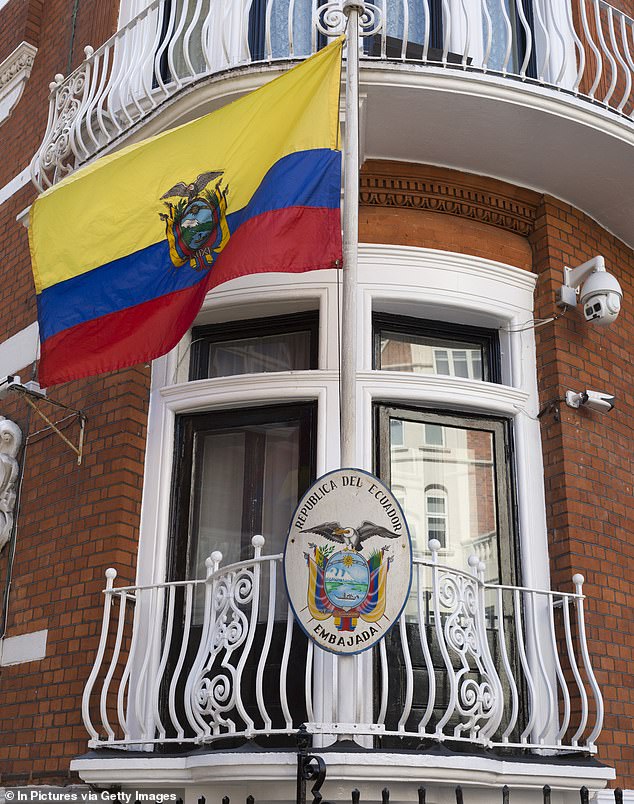 Assange spent seven years holed up inside Ecuador’s London embassy (pictured), where he fled in 2012 to avoid extradition to Sweden to face allegations of rape and sexual assault 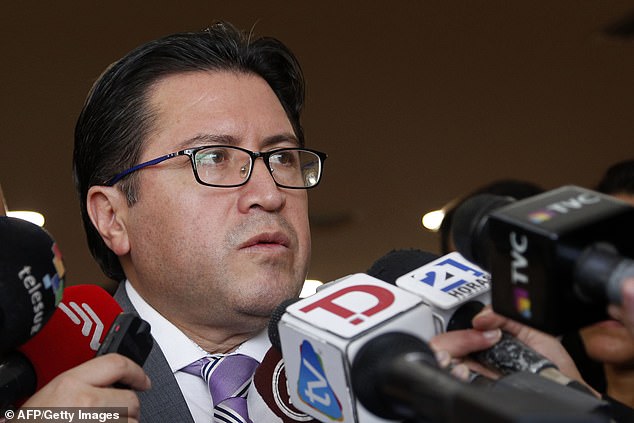 Carlos Poveda, Assange’s lawyer, said the decision was made without due process and Assange was not allowed to appear in the case

Poveda said he will file appeals asking for an amplification and clarification of the decision.

‘More than the importance of nationality, it is a matter of respecting rights and following due process in withdrawing nationality.’

Assange received Ecuadorian citizenship in January 2018 as part of a failed attempt by the government of then-President Lenín Moreno to turn him into a diplomat to get him out of its embassy in London.

On Monday, the Pichincha court for contentious administrative matters revoked this decision.

Assange, 50, has been in the high-security Belmarsh prison in London since he was arrested in April 2019 for skipping bail seven years earlier during a separate legal battle. 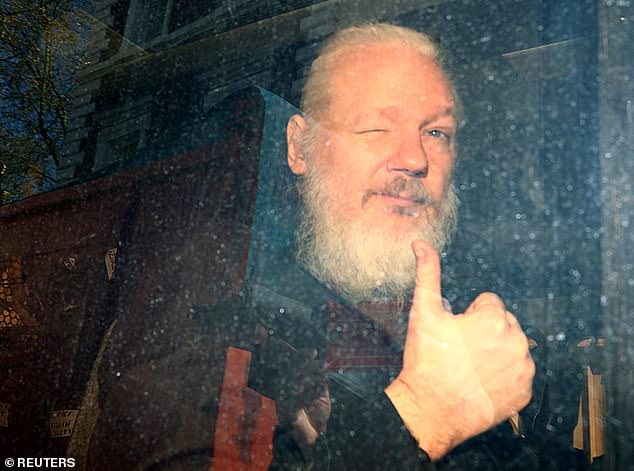 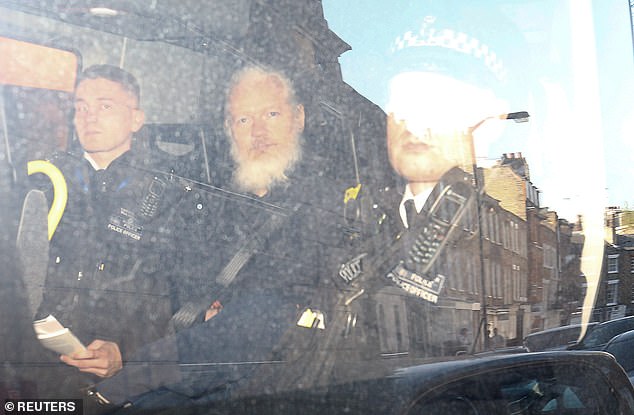 Assange, 50, was arrested in April 2019 for skipping bail seven years earlier during a separate legal battle 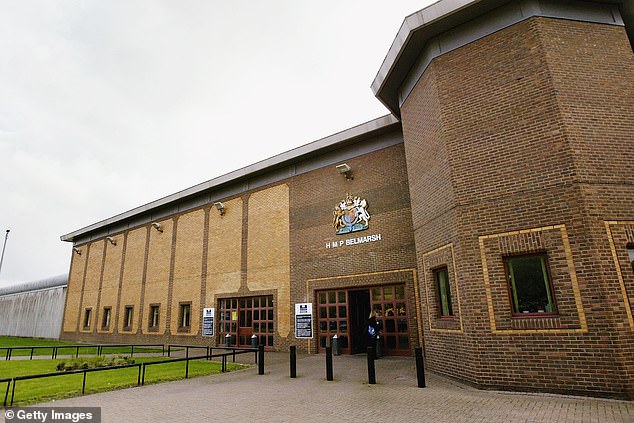 Assange, 50, has been in the high-security Belmarsh prison in London since he was arrested in April 2019

Assange spent seven years holed up inside Ecuador’s London embassy, where he fled in 2012 to avoid extradition to Sweden to face allegations of rape and sexual assault, which he denied.

Sweden dropped the sex crimes investigations in November 2019 because so much time had elapsed.

US prosecutors have indicted Assange on 17 espionage charges and one charge of computer misuse over WikiLeaks’ publication of thousands of leaked military and diplomatic documents.

The charges carry a maximum sentence of 175 years in prison if convicted of all charges.

US prosecutors and Western security officials regard Mr Assange as a reckless enemy of the state whose actions threatened the lives of agents named in the leaked material.

WikiLeaks came to prominence when it published a US military video in 2010 showing a 2007 attack by Apache helicopters in Baghdad that killed a dozen people, including two Reuters news staff.

Lawyers for Assange argue that he was acting as a journalist and is entitled to First Amendment freedom of speech protections for publishing documents that exposed US military wrongdoing in Iraq and Afghanistan. 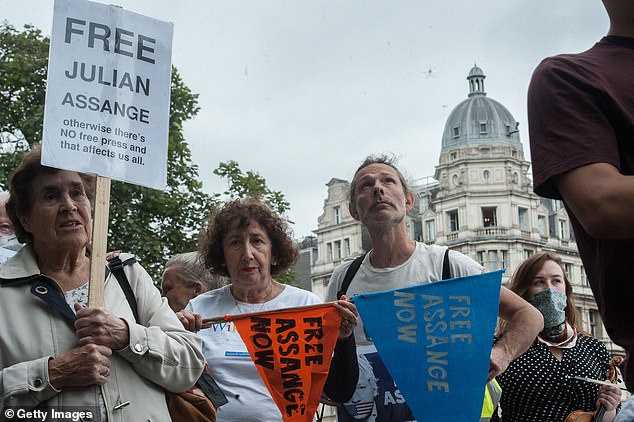 Supporters of arrive as a protest picnic demanding the release of Julian Assange is held on his 50th birthday at Parliament Square on July 3, 2021 in London, England 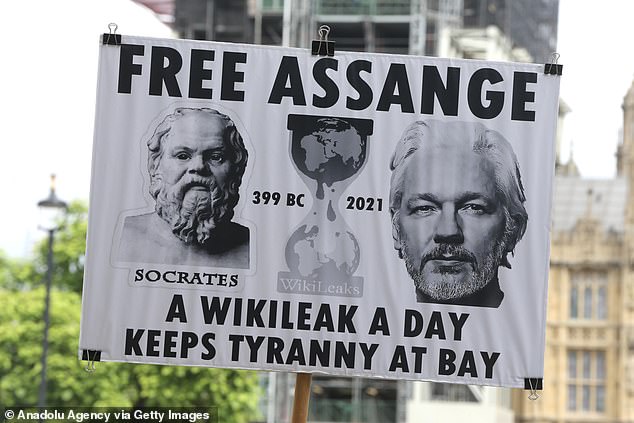 Assange creates Wikileaks with a group of like-minded activists and IT experts to provide a secure way for whistleblowers to leak information. He quickly becomes its figurehead and a lightning rod for criticism.

July: Wikileaks starts releasing tens of thousands of top secrets documents, including a video of U.S. helicopter pilots gunning down 12 civilians in Baghdad in 2007.  What followed was the release of more than 90,000 classified US military files from the Afghan war and 400,000 from Iraq that included the names of informants.

August: Two Swedish women claim that they each had consensual sex with Assange in separate instances when he was on a 10-day trip to Stockholm. They allege the sex became non-consensual when Assange refused to wear a condom.

First woman claims Assange was staying at her apartment in Stockholm when he ripped off her clothes. She told police that when she realized Assange was trying to have unprotected sex with her, she demanded he use a condom. She claims he ripped the condom before having sex.

Second Swedish woman claims she had sex with Assange at her apartment in Stockholm and she made him wear a condom. She alleges that she later woke up to find Assange having unprotected sex with her.

He was questioned by police in Stockholm and denied the allegations. Assange was granted permission by Swedish authorities to fly back to the U.K.

November: A Swedish court ruled that the investigation should be reopened and Assange should be detained for questioning on suspicion of rape, sexual molestation and unlawful coercion. An international arrest warrant is issued by Swedish police through Interpol.

Wikileaks releases its cache of more than 250,000 U.S. diplomatic cables.

December: Assange presents himself to London police and appears at an extradition hearing where he is remanded in custody. Assange is granted conditional bail at the High Court in London after his supporters pay £240,000 in cash and sureties.

February: A British judge rules Assange should be extradited to Sweden but Wikileaks found vows to fight the decision.

April:  A cache of classified U.S. military documents is released by Wikileaks, including intelligence assessments on nearly all of the 779 people who are detained at the Guantanamo Bay prison in Cuba.

November: Assange loses High Court appeal against the decision to extradite him.

June: Assange tells a group of journalists he will not leave the embassy even if sex charges against him are dropped out of fear he will be extradited to the U.S.

November: Assange is questioned over the sex allegation at the Ecuadorian Embassy in the presence of Sweden’s assistant prosecutor Ingrid Isgren and police inspector Cecilia Redell. The interview spans two days.

April: Lenin Moreno becomes the new president of Ecuador who was known to want to improve diplomatic relations between his country and the U.S.

May: An investigation into a sex allegation against Assange is suddenly dropped by Swedish prosecutors.

January: Ecuador confirms it has granted citizenship to Assange following his request.

March: The Ecuadorian Embassy suspends Assange’s internet access because he wasn’t complying with a promise he made the previous year to ‘not send messages which entailed interference in relation to other states’.

August: U.S. Senate committee asks to interview Assange as part of their investigation into alleged Russian interference in the 2016 election.

September: Assange steps down as editor of WikiLeaks.

October: Assange reveals he will launch legal action against the government of Ecuador, accusing it of violating his ‘fundamental rights and freedoms’.

November: U.S. Justice Department inadvertently names Assange in a court document that says he has been charged in secret.

April 6: WikiLeaks tweets that a high level Ecuadorian source has told them Assange will be expelled from the embassy within ‘hours or days’. But a senior Ecuadorian official says no decision has been made to remove him from the London building.

April 11: Assange has his diplomatic asylum revoked by Ecuador and he is arrested by the Metropolitan Police; he is remanded in custody by a judge at Westminster Magistrates Court.

April 12: He is found guilty of breaching his bail terms.

May 2: Court hearing takes place over Assange’s proposed extradition to the U.S. He tells a court he does not consent to the extradition and the case is adjourned until May 30.

June 3: Swedish court rules against detaining him in absentia, setting back the extradition case.

June 12 Home Secretary Sajid Javid signs an extradition request from the US.

June 13 A hearing sets out the date for Assange’s full extradition hearing – February next year.

December 19 – Appears at Westminster Magistrates’ Court via video-link where his lawyer claims US bid to extradite him is ‘political’.

June: Assange failed to appear via video link for his most recent court matter in London’s Westminster Magistrates’ Court