A controversial immigration judge, who posed nude for a calendar and was recently cleared of attacking two hunt saboteurs, has retired.

Judge Mark Davies stood down last Friday after a 44-year career in law, including the last 18 as Judge of the First-tier Tribunal (Immigration and Asylum Chamber).

Mr Davies, 67, famously stripped naked with only a concertina to spare his blushes for a 2007 calendar to raise funds for the Pennine Hunt.

Underneath the racy photo – in which he was billed as Mr July – was a caption which read: ‘Would you like a squeeze?’

The photo of Judge Mark Davies, who posed as Mr July, was published with the caption ‘would you like a squeeze?’

His 67-year-old wife, Joan, also bared all for the calendar as Miss February. She posed behind a Shetland pony under the caption: ‘She was feeling a little horse.’

Afterwards, he was reluctant to talk about the £10 calendar and said: ‘I want nothing to do with that calendar. They’ve all sold and that’s the end of it as far as I’m concerned. No more being produced and I don’t’ want any publicity for it.’

The racy shoot – which the couple had initially been reluctant to pose for – is not the only bum note of his career.

In December 2018 he was disciplined for ‘prejudicial remarks’ he made about Iranians and in January he appeared in court charged with two counts of assault.

He had been accused of approaching two hunt protesters at a New Year’s Day Hunt in the Peak District last year in which he was said to have approached the men ‘snarling with gritted teeth’ before grabbing one by the throat and tackling another into a bramble bush.

Following a two day trial Mr Davies was cleared of assaulting the men after a district judge accepted his claims he had acted in self-defence to protect himself and his wife.

After the verdicts Mr Davies, who is chairman of the historic Barlow Hunt, slammed both Derbyshire Police and the Crown Prosecution Service for the ‘deplorable’ way he had been treated.

He and Joan, who is Joint Master of the Hunt and a former South Yorkshire Police Superintendent, crossed paths with members of the Sheffield Hunt Saboteurs’ Group.

The couple were observing the annual event while anti-hunt campaigners were monitoring the area to ensure no foxes were harmed.

Mr Davies clashed with protesters, Austin Jordan and William Robinson, in a field near Highlightley Farm in the Derbyshire village of Millthorpe.

However, he claimed he had only reacted after being attacked by Mr Jordan, suffering a bloody nose. 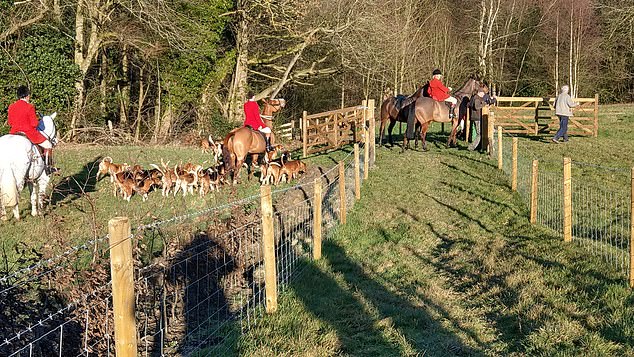 The trial attracted interest from animal rights campaigners with more than 40 protesting outside Chesterfield Magistrates Court in Derbyshire.

Speaking after the verdict Mr Davies said he planned to submit complaints to Derbyshire Police and the Crown Prosecution Service:

He said: ‘The Derbyshire Constabulary and the CPS should hold their heads down in shame, considering the evidence seen during the course of this trial which clearly showed I was brutally assaulted.

‘It’s deplorable they chose not to arrest the person who had assaulted me. Despite all the evidence five months later I was told I would be prosecuted.

‘As a victim I have a right to review, but the CPS made it perfectly obvious that was not going to be the case.

Mr Davies added: ‘I’m pleased to say I am due to retire shortly and I will do so with my good character intact.

‘The mob outside this court anarchists and thugs who have no interest in animals whatsoever.’

The Courts and Tribunals Judiciary announced that Mr Davies retired on 24 April 2020.

A statement read: ‘Judge Davies (67) was admitted as a Solicitor in 1976. He was appointed an Immigration Adjudicator in 1990 and a salaried Immigration Judge (now known as a Judge of the First-tier Tribunal (Immigration and Asylum Chamber) in 2002.’