First-time parents Nina Lacy and David Pride have spent the past eight months with their son, Luca, in Sydney, but on Thursday they were on the first flight to Adelaide. For Luca, it was his first time in a plane – and also the first time he would meet most of his extended family.

The family bought tickets earlier this week when the easing of border restrictions was announced, but it was by chance they got the first Qantas flight out. 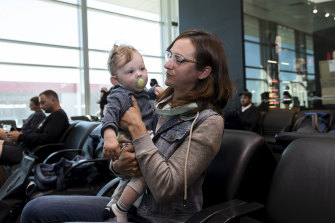 Nina Lacy and her eight-month-old son, Luca, have flown to meet her husband’s family in Adelaide. Credit:Brook Mitchell

The airline has not operated flights between Sydney and Adelaide since July.

"It was a relief [to get on the flight]," Ms Lacy said. "This time has been really hard for families, many of whom are still separated."

While many parents fear flying with infants, Luca only cried a few times. Ms Lacy said everyone on the flight had been happy, with a "shared sense a feeling of luck and just thankfulness that we were able to go somewhere".

Both grandparents were finally able to cuddle the newest member of the family after countless video calls over the past few months. 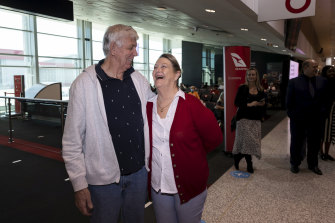 Paul and Cathy Breeze flew to Adelaide to surprise their grandchildren. Credit:Brook Mitchell

On the same flight were Shellharbour residents Paul and Cathy Breeze, who were flying to Adelaide to surprise their three grandchildren. It has been several months since the couple has seen them.

While the family has caught up virtually, it's been no substitute for face-to-face catch-ups.

"We got on the plane and, as we got closer, the butterflies started," Mrs Breeze said. "Excited is an understatement."

Once the couple landed, they called their grandchildren to see what they were doing. The three kids were shopping at Rundle Mall, so Mr and Mrs Breeze drove to the centre to surprise them.

"They were very surprised," Mrs Breeze said of the reunion. "There were a few tears.

"We've already planned tonight: games night and pizza, like when they were little."

Jetstar will increase flights from five per week to twice daily from October 1, and three times daily from November 1. Jetstar is expected to announce details of a flash sale in the next 24 hours for flights between the two cities.

In the 24 hours following the border announcement, Qantas and Jetstar sold more than 9,500 seats in total, 3000 of those being snapped up after Jetstar’s flash sale went live on Thursday.