London: The World Health Organisation has suggested Europeans in countries returning to normality from COVID lockdowns show restraint in their public gatherings to avoid sending the wrong message to nations with escalating outbreaks.

The warning followed heady scenes on the streets of London where rowdy England fans drank in large groups at unofficial fan zones ahead of their team’s loss in the Euro 2020, and the successful staging of a packed Wimbledon in which Australian Ash Barty fulfilled her Grand Slam dream. 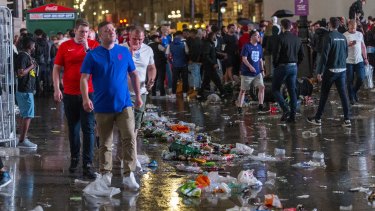 England fans take to the street after Italy’s team claimed victory over England in the UEFA Euro 2020 final.Credit:Getty

UK Prime Minister Boris Johnson urged the public not to partake in a “great jubilee” when social-distancing rules are dropped in one week, allowing nightclubs to reopen and weddings and mass gatherings to be held with no limit on the number of patrons.

Johnson’s new cautious messaging contained the threat of future restrictions if hospitalisations rose too quickly. He said Britons would now be expected to wear face coverings on public transport although they would not be mandated by his government.

“This is not the end of COVID, it requires constant vigilance, it means thinking about others as well as yourself,” he told a news conference at Number 10 Downing Street.

“Because the legal restrictions have come off, [this] should not be taken as an invitation by everybody simply to have a great jubilee and freedom from any kind of caution or restraint.

“This is about as good a time as any but to do it properly and sensibly, everybody has got to be cautious,” he said.

Ryan said organisers of mass events, including the Euros and Wimbledon, needed to plan so that the gatherings did not drive transmission but cautioned against the message that holding them in the first place sent the rest of the unvaccinated world.

“Look of what the rest of the world is looking at — hundreds of millions of people in the southern hemisphere, hundreds of millions of people in developing countries — are looking on as their health systems collapse and they’re going ‘wow, they’re having a lot of fun in Europe, life is normal there’,” Ryan told a virtual news conference hosted at the WHO’s headquarters in Geneva. 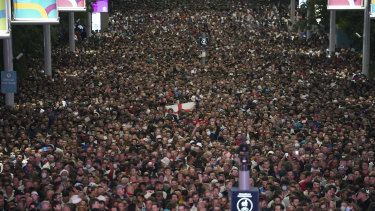 Swarms of flying ants could joins swarms of fans at Wembley for the Euro 2020 final.Credit:AP

“It’s more difficult for governments in those situations, in those countries, to continue to implement public health and social measures because their populations are looking at this and saying ‘hey it’s all over in Europe, maybe it’s all over here.’

“So there are also issues around the imagery we create around mass gathering events and a sense that in some senses, it’s over in Europe, it’s all done here, we’ve got everybody vaccinated, it’s back to normal life.

Last week, federal Opposition Leader Anthony Albanese seized on images of tens of thousands of Britons attending Wimbledon and the Euros, saying the pictures underlined the failure of Australia’s vaccine rollout with just 11.3 per cent of the population fully vaccinated. 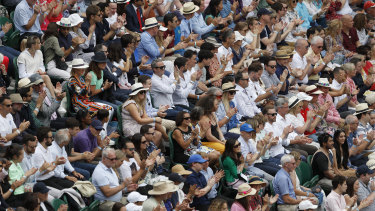 By contrast, Britain’s vaccine rollout is one of the most advanced in the world with 87 per cent of the adult population given one dose and 66 per cent fully jabbed. But take-up among younger males has plunged compared to other age groups.

On the day that the vaccination program was opened to those aged 18-24 years, Britain was averaging more than 200,000 first doses a day but that rate has plunged to an average 81,000 a day in just three weeks with just 42,000 jabs given in the past 24-hour period.

However, the government says it is on track to beat its goal of offering a first dose to every adult and vaccinating two-thirds by next Monday when all restrictions will be lifted, although some limits on international travel will remain.