India has seen its coronavirus cases spike by a record amount as deaths also mounted even as the country loosens lockdown restrictions.

It also saw 465 new deaths, which would be its highest total if not for 2,003 deaths registered in a single day last week when old cases were added to the system.

With cases expected to keep rising the army has been being drafted in to help treat victims, including staffing a new 10,000-bed hospital in the capital New Delhi. 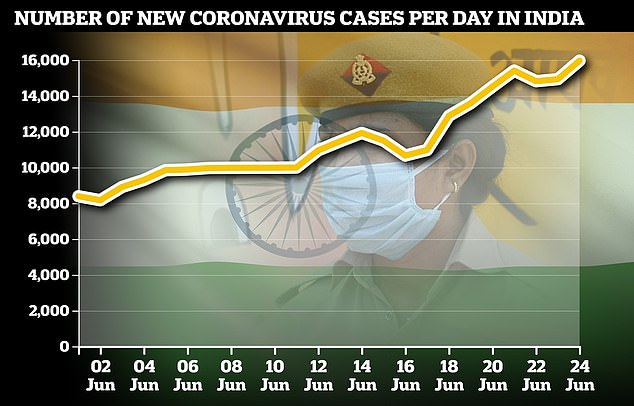 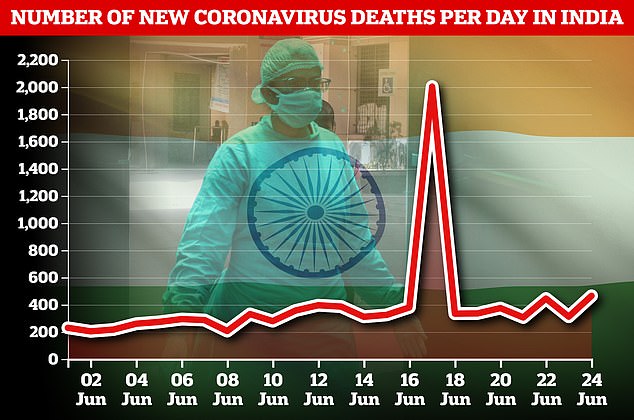 The country also reported 465 new deaths, which would be a new one-day record if not for a blip in the data on June 17 which saw thousands of old cases suddenly added to the system

The city, which has more than 20million inhabitants, also recorded its highest single-day increase on Wednesday at more than 3,900 cases.

That number will rise to 33,400 next week when new facilities, including the army hospital, are opened.

However, ministers are warning that will still not be enough to deal with the spiralling number of cases.

Delhi’s Deputy Chief Minister Manish Sisodia said that a new federal government order to take every positive patient to an assessment centre as opposed to evaluating them at home was stretching already limited resources.

‘Our ambulance system, our medical system is under pressure now. Today, we are having to take patients in buses,’ Sisodia said. 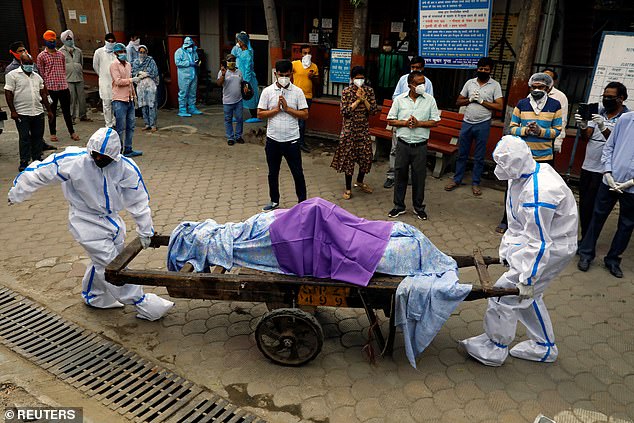 India now has the fourth-highest coronavirus case total in the world, behind only the US, Brazil and Russia (pictured, a coronavirus victim is taken to be burned in New Delhi) 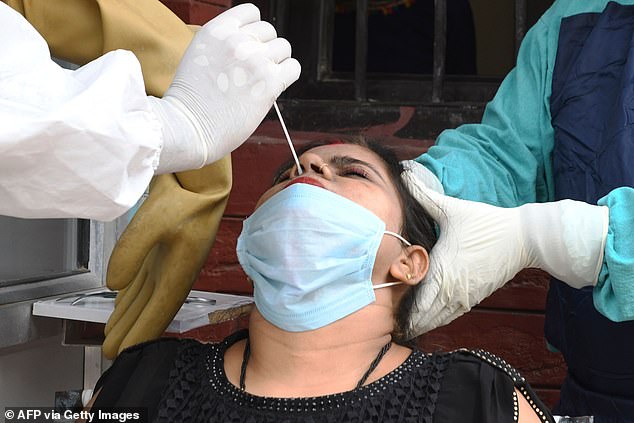 The country is now testing some 200,000 people per day in an attempt to track new cases as it eases out of lockdown, which was imposed on March 24 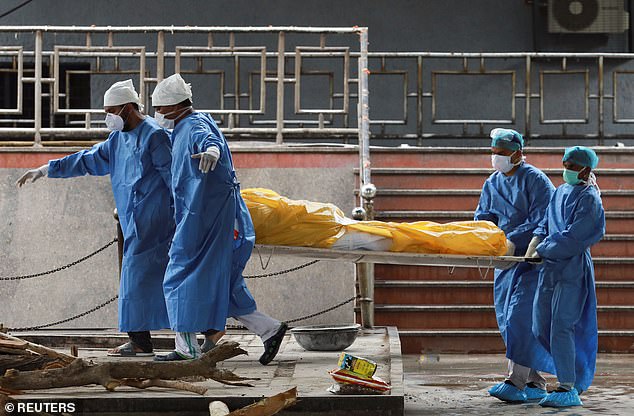 India has a total of 14,467 deaths from the virus, still far behind European countries such as the UK, France, Spain and Italy, but is gaining on them rapidly

‘This (rule) is creating chaos in New Delhi.’

The western state of Maharashtra remains the most-affected in India, accounting for 139,010 cases – around a third of the total.

Another 6,531 people have died in the state, almost half of India’s total.

India went into country-wide lockdown of its 1.4billion population on March 24, which remains the largest lockdown applied during the pandemic to date.

The lockdown was announced with little warning, causing chaos in large cities with millions of migrant workers scrambling to find a way home. 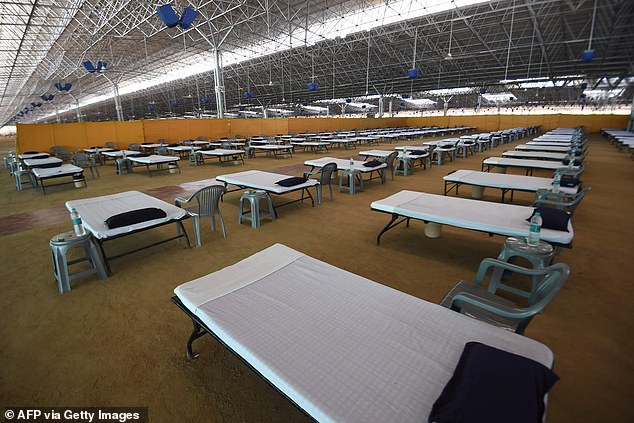 New Delhi has drafted in the army to help treat its growing number of coronavirus patients, including opening a 10,000-bed hospital 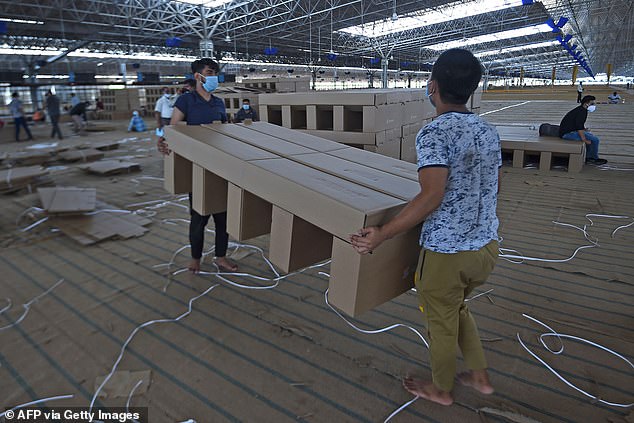 The hospital is being built inside a religious centre in the capital and is due to open next week, almost doubling New Delhi’s coronavirus bed capacity 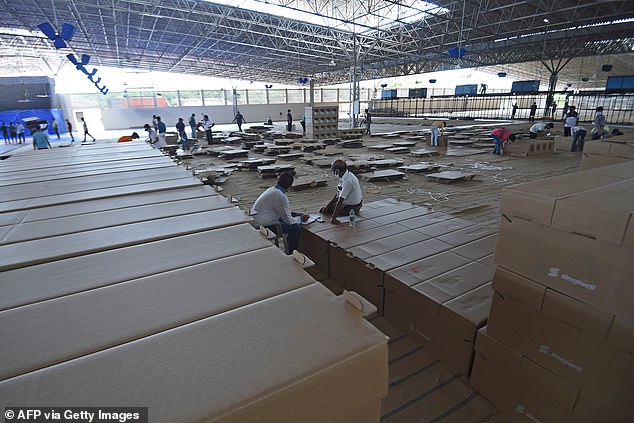 As well as the military hospital (pictured) New Delhi will get another 10,000 beds by converting other, smaller structures into wards 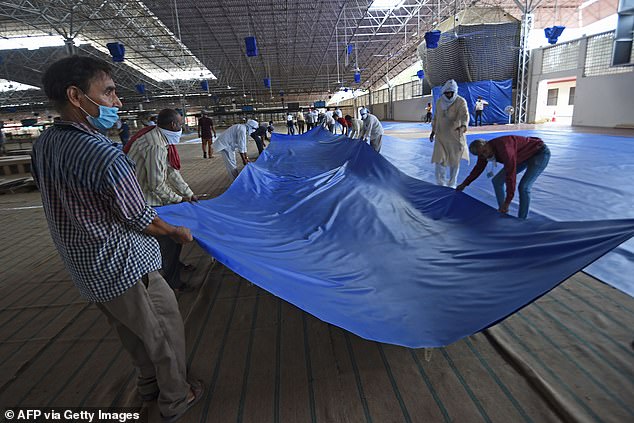 Measures have been credited with helping slow down the growth of the virus, but have failed to squash the peak of infections as they did in Europe.

Faced with a huge spike in unemployment and a tanking economy, the government began a phased reopening of the country on June 8.

India now has the fourth-highest number of coronavirus cases anywhere in the world, having leap-frogged Britain’s total on June 12.

The US still has the most cases in the world at 2.3million, followed by Brazil with 1.1million and Russia with 606,043.