A handyman from West Yorkshire smacked his head and broke his leg after his ladder slipped from under him and he fell from the roof of a building.

Joiner Josh Coates, 30, was working at the top of a ladder which was unsupported at the bottom.

The bottom of the ladder slipped and Josh fell down with it. 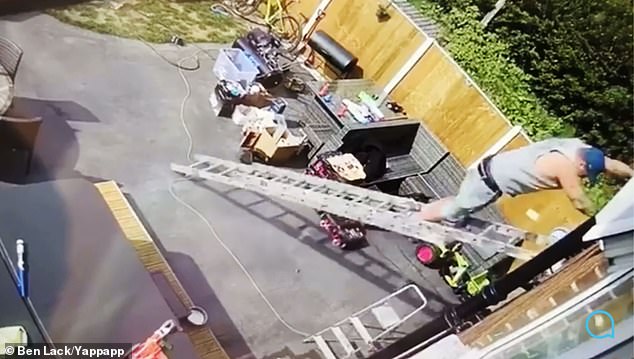 Josh Coates, 30, was working at the top of a ladder when its feet slipped backwards sending him tumbling 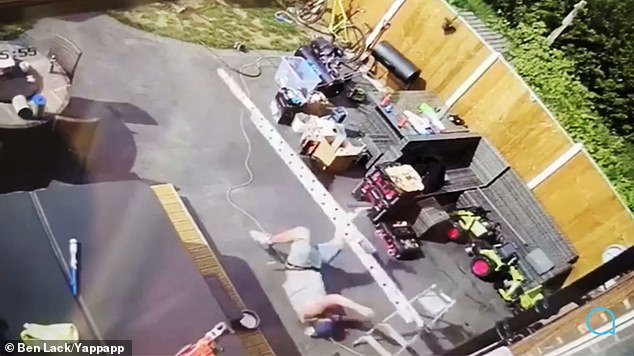 The handyman from Wakefield fell to the ground and bashed his head on top of an aluminium step ladder, bending it

In the footage captured by CCTV Josh can be seen working at the top of the ladder before the feet slip backwards.

Josh and the ladder fall down and is seen hitting his head on an aluminium step ladder which broke his fall.

In the video Josh can be heard saying: “I hit my head on the ladder. It was my head that bent it.”

He added that he was ‘okay, just a broken tibia and four pins.’

The step ladder Josh fell on was left dented at the top after his head hit it during the fall.

The handyman from Wakefield sustained cuts, bruises and a broken tibia.

The CCTV footage was shared online by his friends.

Daz Sykes, a friend of Josh, commented on the video saying ‘Hard head lad. Like a bungalow now’t upstairs.’