Michael Gove blasted the EU for taking an ‘ideological’ approach to a post-Brexit trade deal today as he demanded Brussels treat the UK as a ‘sovereign equal’ to get a deal.

The Cabinet Office minister said the UK Government remains committed to securing a deal with a free trade agreement ‘at its core’ and it looks forward to talks resuming in June.

But he warned it remains difficult to reach a mutually beneficial agreement while the ‘EU maintains such an ideological approach’ –  something Brussels believes Westminster is also pursuing.

The Brexit transition period is due to conclude at the end of December 2020 and the Government continues to repel appeals from across politics to extend it in the wake of the coronavrus pandemic.

Responding to an urgent question in the Commons this afternoon, Mr Gove told MPs it ‘remains difficult to reach a mutually beneficial agreement while the EU maintains such an ideological approach’.

Fishing and the so-called ‘level playing field’ on standards are two areas where the two sides remain some way apart.

‘The EU essentially wants us to obey the rules of their club even though we’re no longer members,’ he said.

‘We believe agreement is possible if flexibility is shown. The government remains committed to a deal with a free trade agreement at its core… but success depends on the EU recognising the UK as a sovereign equal.’ 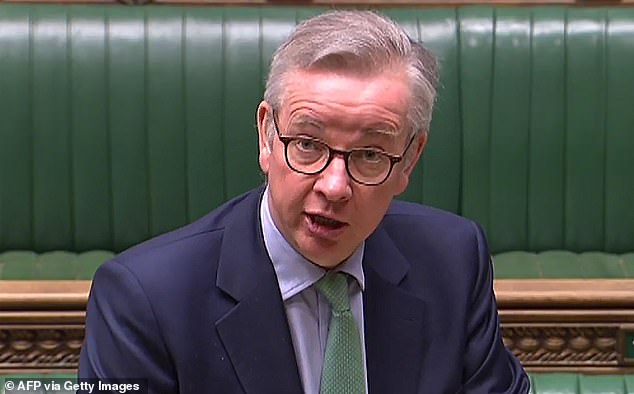 He added negotiators from the UK and EU held ‘full and constructive’ discussions last week via video conference, covering trade in goods and services, fisheries, law enforcement and criminal justice and other issues, with both sides discussing full legal texts.

Britons could see prices of dishwashers, paint and padlocks slashed under the government’s post-Brexit plans.

Trade Secretary Liz Truss has unveiled the new tariff regime for when the transition period ends, currently scheduled to be January.

Duties are set to be axed on £30billion worth of imports, while tariffs will also be protected for industries such as agriculture, automotive and fishing.

Items such as dishwashers, freezers and even Christmas trees will see zero tariffs under the regime, while the Government said cooking products such as cocoa and baking powder will also be levy free.

The UK Global Tariff will replace the European Union’s external tariff on January 1, at the end of the transition period, and will see 60 per cent of trade come in tariff-free under the plan.

Ministers have repeatedly insisted there will be no delay to the process, despite the UK and the world scrambling to cope with the coronavirus fallout.

He explained: ‘The discussion underlined that a standard comprehensive free trade agreement alongside other key agreements on issues such as law enforcement, civil nuclear and aviation all in line with the political declaration could be agreed without major difficulties in the time available.

A fourth round of negotiations is pencilled in for early June, just weeks from a deadline for an extension to talks that Johnson has ruled out.

The government meanwhile published a raft of draft legal texts used in the talks, and a new global tariff regime to replace the EU’s external tariff on goods from January 2021.

The tariff schedule, which ministers said would see duties axed on some £62 billion ($76 billion, 69 billion euros) of imports, will apply to countries with whom the UK does not have a trade agreement.

For Labour, shadow Cabinet Office minister Rachel Reeves said: ‘Peace in Northern Ireland was hard-won, we must not jeopardise it.

‘In January, the Prime Minister guaranteed unfettered access for goods moving between Britain and Northern Ireland.

‘Last week it was revealed that the Government would implement checks on some products crossing the Irish Sea and that there would be new infrastructure at ports coming from mainland Britain to Northern Ireland.

‘So can (Mr Gove) confirm whether these additional checks are being planned for when the road map for implementing the protocol will be published?’

Mr Gove responded: ‘Peace in Northern Ireland, she’s absolutely right, is critical and we will shortly be publishing a framework document on how we intend to implement the protocol in order to ensure that we have unfettered access for goods from Northern Ireland into Great Britain and we preserve the gains from the peace process.’

SNP Cabinet Office spokesman Pete Wishart said: ‘This Government is doing nothing than playing political games with the futures of millions of people by pursuing this anti-EU agenda at all costs.’