Seoul: A former North Korean diplomat has won a parliamentary seat in South Korea's swankiest district, four years after fleeing a London embassy and defecting to the South.

Thae Yong-ho was Pyongyang’s deputy ambassador to the United Kingdom where he had managed secret funds for leader Kim Jong-un until he fled to the democratic, wealthy South in 2016. 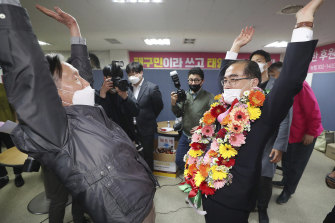 Thae Yong Ho, right, former North Korean diplomat reacts with a supporter after he was certain to secure victory in the parliamentary election in Seoul, South Korea on Thursday.Credit:Yonhap/AP

"I was dearly afraid if the Gangnam residents would take a guy from the North," a smiling Thae said in an acceptance speech shared on his YouTube channel, as crowds of voters gathered in his campaign office, chanting his name and cheering.

"But so many people here gave me strength – they held my hand, welcomed me to Gangnam and promised to vote for me," he said in a hoarse voice after weeks-long rallies.

Thae, who had worked in South Korea as a foreign policy expert before launching a bid for parliament in February, is the first North Korean refugee to become a legislator representing a constituency in South Korea. Cho Myung-chul, a former North Korean professor, served in parliament from 2012-16 on a party endorsement but without any constituency.

The election drew unprecedented levels of participation from North Korean defectors challenging what they saw as the flawed cross-border policy of President Moon Jae-in.

Ji Seong-ho, a defector invited to Washington in 2018 to attend US President Donald Trump's State of the Union address, was also elected to the parliament as a proportionate representative.

But Thae's political foray was far from easy, facing a backlash from some citizens and even his party's campaign chief, Kim Chong-in, who said Thae was not suitable to represent the district because he had "no roots in the South".

"His landslide victory means the people of Gangnam didn't really care that he's a defector. They seem to believe that he's more loyal to the South, not the North," said Lim Seong-ho, a professor of political science at Kyung Hee University in Seoul.

Thae has said he made the money giving lectures and writing books and papers, and paid more than 100 million won in taxes every year.

His two memoirs were big hits. The first of them, in which he described how Pyongyang covertly amassed foreign currency via diplomatic missions as well as the duplicity of its denuclearisation commitment, sold more than 200,000 copies in South Korea and was published in several languages.

North Korea's state media has criticised Thae's defection, calling him a "human scum" and criminal who had embezzled state funds and sexually assaulted a minor.

Thae has flatly denied those claims and vowed to continue his political activities even after police stepped up security due to safety concerns.

"I had risked my life to come to the Republic of Korea seeking free democracy and values in market economy," Thae said.

"I will solve regional issues with the market principles … while pushing for North Korea policy that better reflects the reality there and matches the pride of the South Korean citizens."