Gang filmed barbaric torture and put it on FACEBOOK: Thugs beat football coach, 28, with sledgehammers, cut him with an axe, carved ‘nonse’ into his back then uploaded it to social media – as they jailed for total of 31 years

A football coach was filmed being tortured in a relentless attack which saw a false sex offender slur carved into his back which was then uploaded to Facebook for likes.

Jordan Storey, 28, had his hair and feet set on fire and the incorrectly-spelled word ‘nonse’ sliced into him during the ordeal which used an axe, sledgehammer, dog chain and knife and dumbbell bar as weapons.

Mr Storey, from Whitley Bay, also had cigarettes stubbed out on him and was tied to a chair by mocking attackers who had left him convinced he would be murdered.

The nightmare unfolded at Wilson-Ford’s flat saw them discuss disposing his body on the beach then framing him for raping McNally.

Horrific evidence at Newcastle Crown Court heard Mr Storey had known Wilson-Ford for ten years she phoned him on February 17 last year saying her partner Barker had assaulted her. 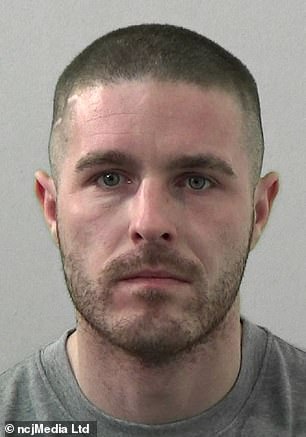 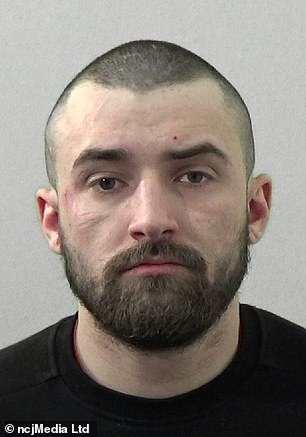 Jamie Barker and Lewis Heman, jailed for wounding with intent on Jordan Storey in the attack

He went to her flat with a friend and attacked him himself before staying to protect Wilson-Ford as Barker, Herman, McNally also remained in the property.

But things took a dark turn when the attackers – high on MDMA – started assaulting Mr Storey.

Jolyon Perks, prosecuting, said: ‘The prosecution say the motivation was most likely revenge for the previous assault by the complainant on Barker.

‘Herman punched him repeatedly, McNally picked up a wine bottle and hit him about the head with it twice. She held him down on the sofa while Barker hit him in the head with the wine bottle.’

The victim was then struck with a sledgehammer three times to his back by McNally while Barker threw multiple blows with his fists and knees to his head and body.

Mr Perks said: ‘Part of the assault was recorded for posterity on Barker’s mobile phone.

‘While he was on the sofa, Wilson-Ford armed herself with a dumbbell bar and used it to strike at his kneecaps.

‘Barker struck him with a metal dog chain while Herman used an axe and struck multiple times into his forearms. 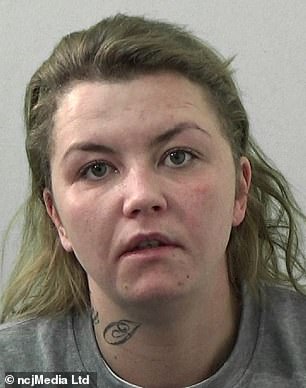 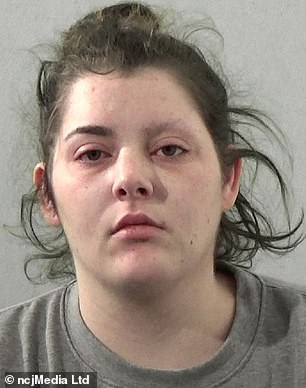 ‘Herman and Barker put him in a plastic chair and Wilson-Ford and McNally tied his hands and arms to the chair.

‘Herman told him ‘you’re getting killed tonight’. He believed it.’

The assault continued, with Herman stabbing him in the leg with a knife.

Prosecutors said he also used pliers to try to pull out his teeth and pull at his toes, which he denied doing.

Mr Perks said: ‘Herman was recorded spraying the top of his head with antiperspirant before setting fire to his hair.

‘He then used the same method to set fire to his feet. While still tied to the chair, the complainant heard Herman say ‘I’m carving ‘nonce’ into his back’. Herman and McNally took turns to do just that using a knife.

‘Barker and McNally threw DVD boxes at his head and all four extinguished cigarettes on his body.’

Mr Storey was eventually untied and remembers lying on the sofa in pain when Herman then used an axe to repeatedly strike his arms and legs and stamped on his feet. 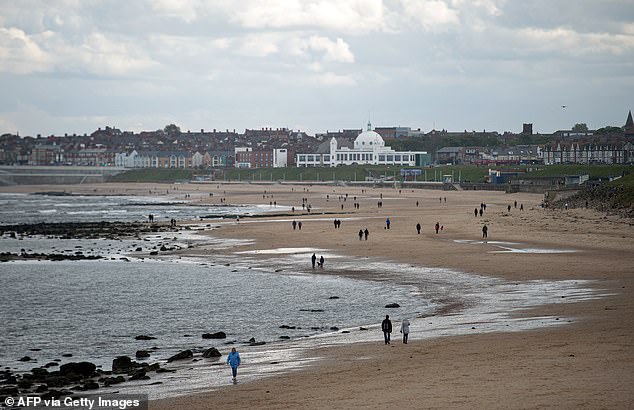 The beach in Whitley Bay, where some of the attack weapons had been hidden after the torture 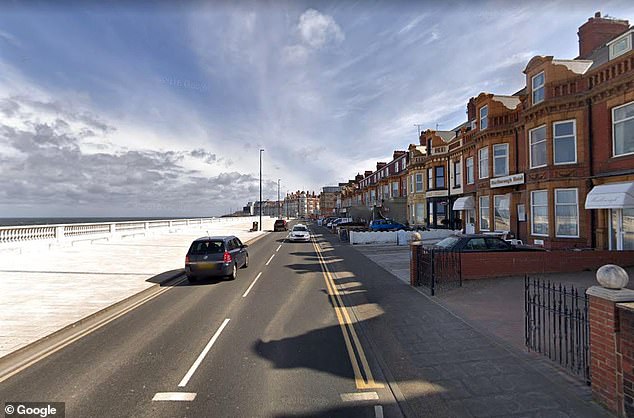 Herman then struck multiple blows while telling Barker to hold him down.

Mr Perks said: ‘This was filmed by Barker and recorded on his mobile phone. Herman can be heard mocking him asking why he was crying before delivering a full-blooded upper cut into his face.

‘Herman and Barker caused cuts to both sides of his face with something sharp.’

Mr Storey then overheard them discussing how they could get away with what they had done, including dumping weapons in the sea.

Herman discussed killing him with the sledgehammer and dumping his body on the beach at Whitley Bay.

When Mr Storey pointed out they would be caught on camera, they discussed falsely accusing him of raping McNally.

They later went bought bandages and disinfectant, dressing his wounds and telling him he was going nowhere until he had healed.

At 3.50am on February 23, the police attended the bloodstained flat in relation to an unrelated matter and found Mr Storey lying on a mattress badly injured.

His skin was yellow as he had suffered acute kidney failure and he had a large number of injuries.

These included broken ribs, a broken nose, broke toe, numerous cuts to various parts of his body of varying depth including a dozen wounds to his forearm, extensive bruising to his face and all over his body, a deep cut to his thumb where the bone was visible, cigarette burns to his arm and hand and the word ‘nonse’ had been carved into his back.

His mum received information some of the weapons had been disposed at the beach and after trawling the rocks, found the hammer, dog lead, dumbbell bar and pliers.

On Barker’s phone, the police found videos and pictures of the attack.

There were also pictures on Herman’s phone and he had posted video of the violence on Facebook.

Ten members of the public contacted officers saying the footage had been posted on social media for people to see.

In a victim impact statement, Mr Storey said: ‘The injuries I sustained are horrific and I genuinely thought they were going to kill me. I had accepted this was the end for me.

‘All I could thing about was my children and family. I feared I would never see them again.

‘Instead of killing me they decided to scar me for life and carve ‘nonce’ in big letters onto my back and degrade me for life while I was strapped to the chair.

‘The footage was shared with almost everyone in my local area and my friends and family have viewed how I was tortured.

‘The humiliation is beyond description. Being tortured was horrific.’

Mr Storye described how he now feels like looks like a thug due to his scars and he was also unable to work as a shopfitter due to nerve damage caused by the deep wound to his thumb.

He now has PTSD and said his mother, an ambulance worker, was also traumatised, adding: ‘I used to be a football coach but I can no longer do that.’