The gritty realism of street life could help fill the pockets of Melbourne’s homeless after the launch yesterday of a new magazine, The Big Issue. 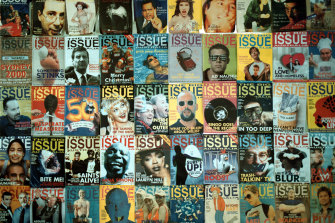 Covers of The Big Issue

Modelled on the successful British street paper of the same name, the local version will be sold on the streets by “trained” homeless people who will keep $1 of the $2 cover price.

The managing editor, Mr Paul Pease, said the philosophy was to give homeless people “a hand up, not a hand out” while raising community awareness of social issues through hard-hitting articles by leading and emerging writers.

The UK Big Issue sells more than one million copies a month and has spawned street papers in Eastern Europe and South Africa.

The organisers of the Melbourne magazine hope to make it a national bi-monthly within a year. 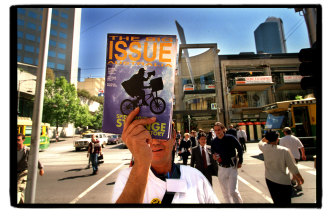 The Big Issue on sale in the Bourke Street Mall in 1998.Credit:Craig Abraham

“It will not be a glory rag for the nightclub venues or travel industry, but a magazine about real social issues,” said Mr Jim Carden, a communications lecturer at RMIT who helped launch 10,000 copies under the Flinders Street clocks yesterday.

Twenty homeless people have been allocated a patch along the city’s spine to sell the first issue.

All profits will go into developing programs for homeless people.