Fire ‘started by migrants with Covid-19 who refused to isolate’ destroys Greece’s largest refugee camp, as hunt begins to find dozens of infected people before they spread disease

Greece’s largest migrant camp has been destroyed by a fire that is thought to have broken out after asylum seekers who had tested positive for coronavirus refused to go into isolation with their families.

The Moria camp, on the island of Lesbos, was ‘completely destroyed’ by a blaze which began at 2am Wednesday, the country’s migration ministry secretary said, though there were no immediate reports of casualties.

It comes after a coronavirus outbreak was first detected in the camp last week, with 35 cases now recorded.

Greek media reports that staff were moving the infected into isolation along with their families when ‘clashes’ broke out, resulting in the fire. Police have yet to confirm the reports, but an arson investigation is underway. 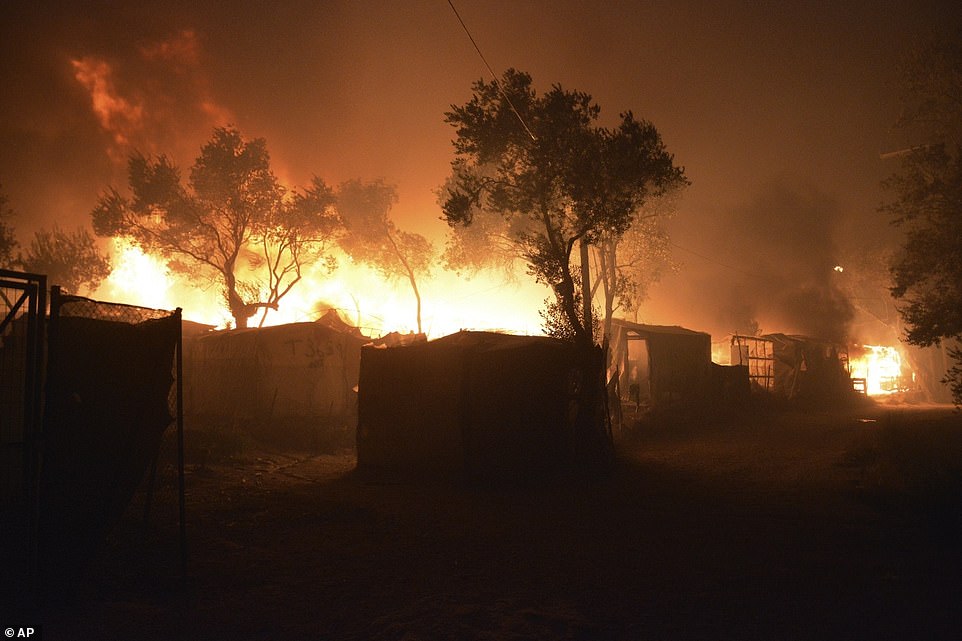 Fire has almost completely destroyed Moria, the largest migrant camp on the Greek island of Lesbos, leaving more than 12,000 asylum seekers without shelter 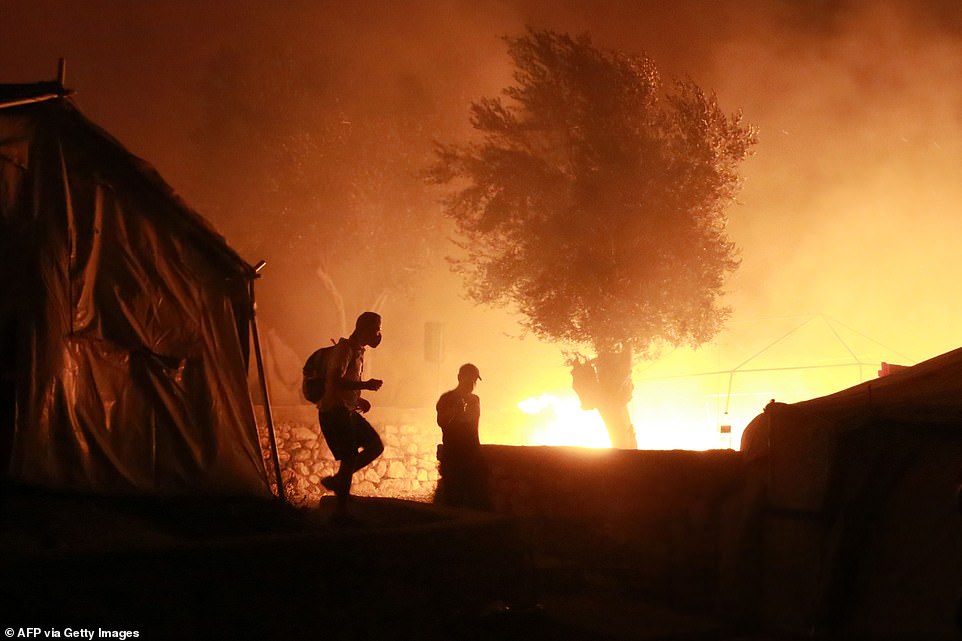 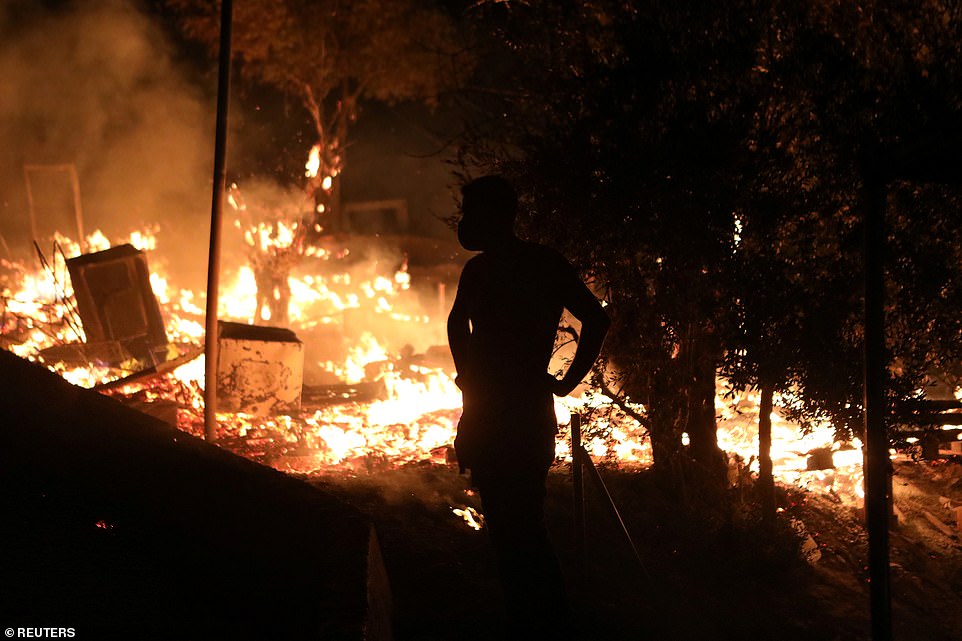 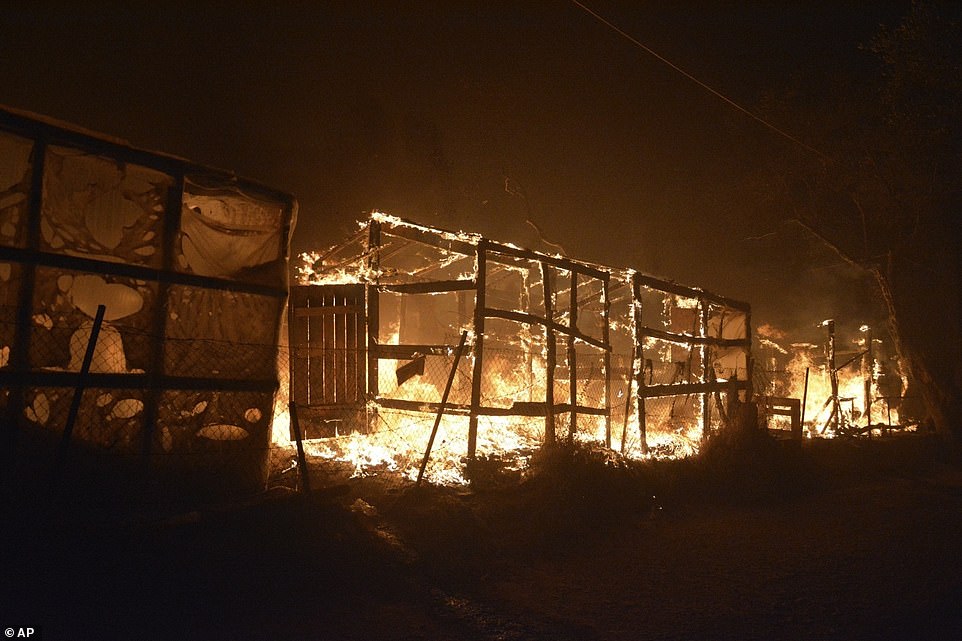 Fire rips through makeshift tents at the Moria camp on the Greek island of Lesbos, as police launch an arson investigation 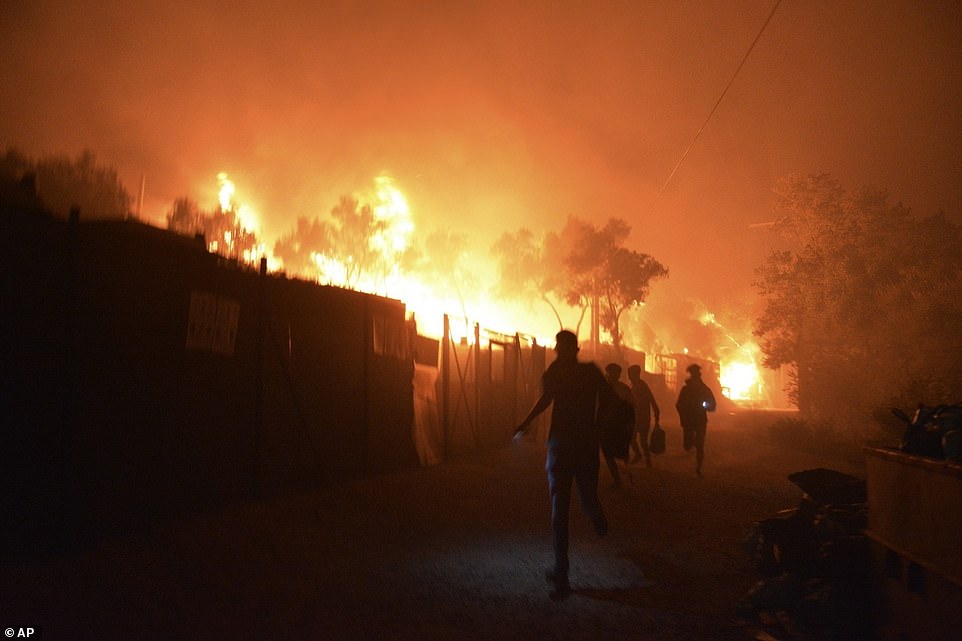 Migrants flee the flames at the Moria camp in the early hours of Wednesday. The fire almost completely destroyed the camp, but there were no immediate reports of casualties 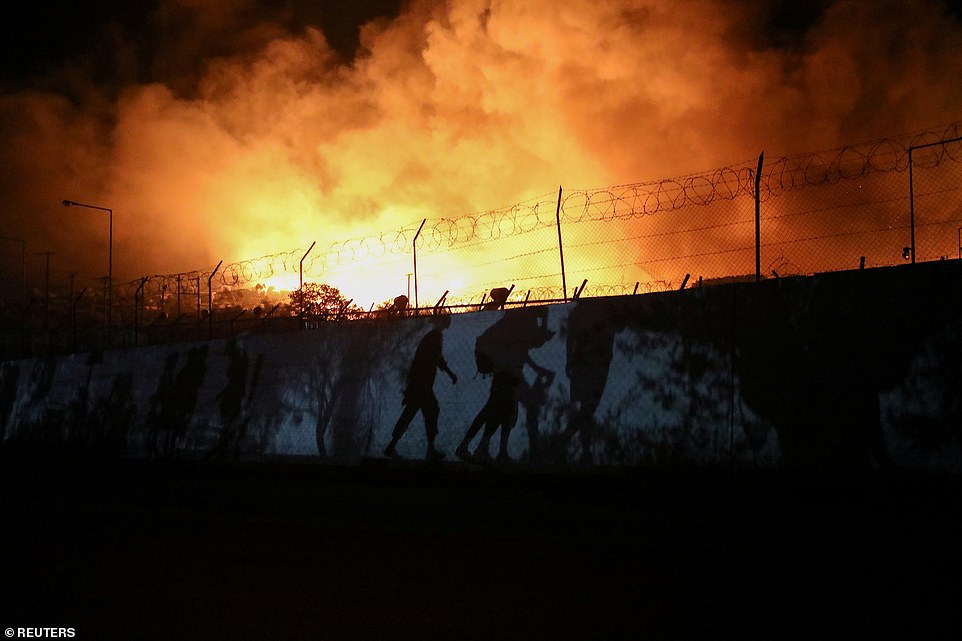 A state of emergency has also been declared on Lesbos amid fears that more than 12,000 migrants who called the camp home will spread the disease by fleeing into nearby villages.

Refugee support group Stand by Me Lesvos said on Twitter it had received reports that Greek locals on the island had blocked fleeing asylum seekers from heading into a nearby village.

Government spokesman Stelios Petsas warned that authorities face a ‘titanic’ effort to shelter the asylum seekers, as well as track down and isolate dozens of confirmed coronavirus infections among them.

‘There are 35 positive cases and they need to be isolated… to prevent an outbreak among the local population,’ Petsas told state TV ERT.

Administration offices, a clinic inside the camp and thousands of tents and were damaged by the fire, according to local news site Lesvospost.

Greek news agency ANA said the fires had started after a revolt by asylum seekers who were to be placed in isolation after testing positive for coronavirus or coming into close contact with an infected patient. 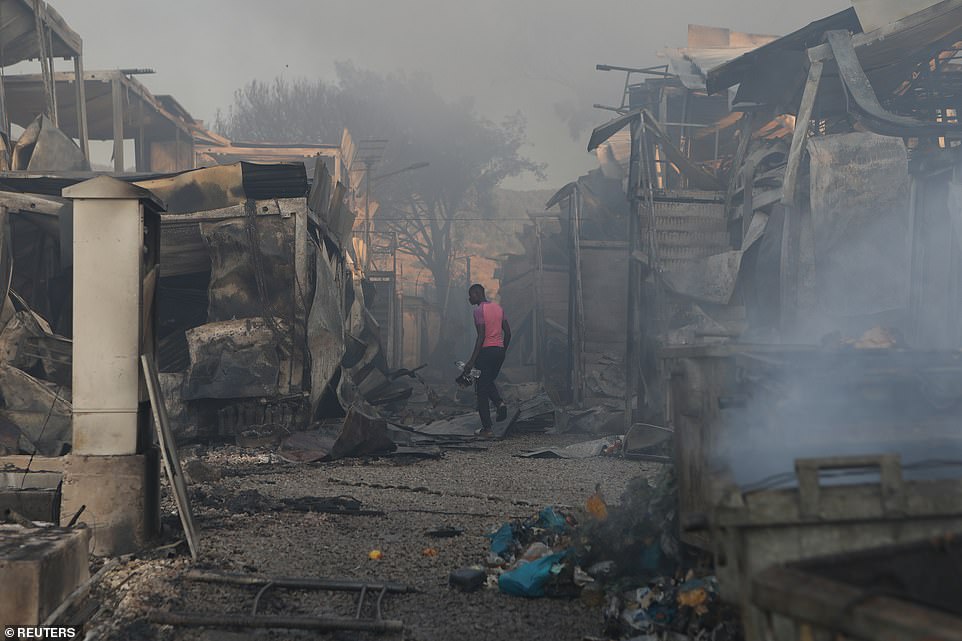 A man picks his way between the destroyed remains of tents inside the Moria camp, after the fire had burned out 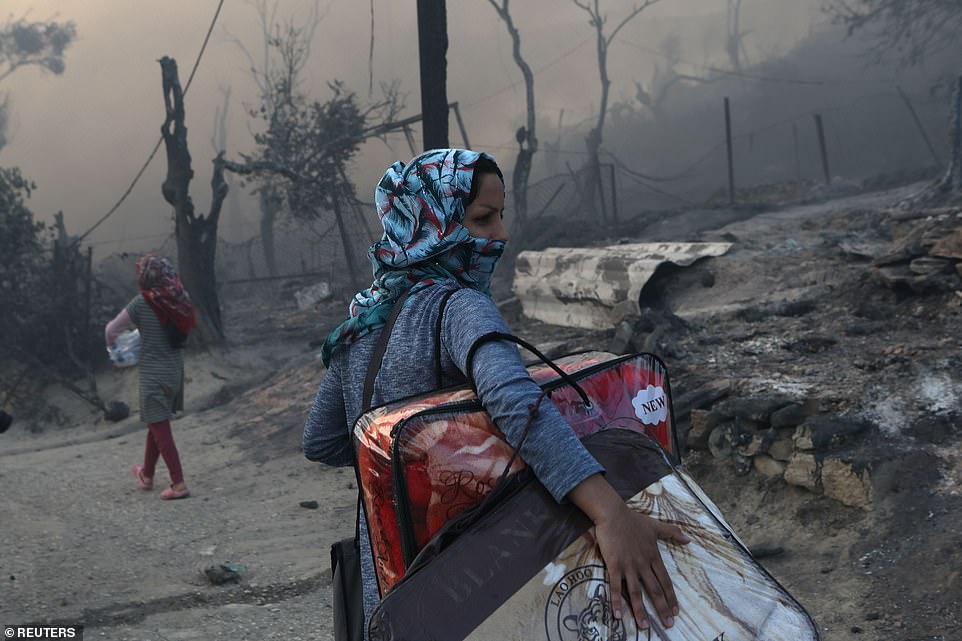 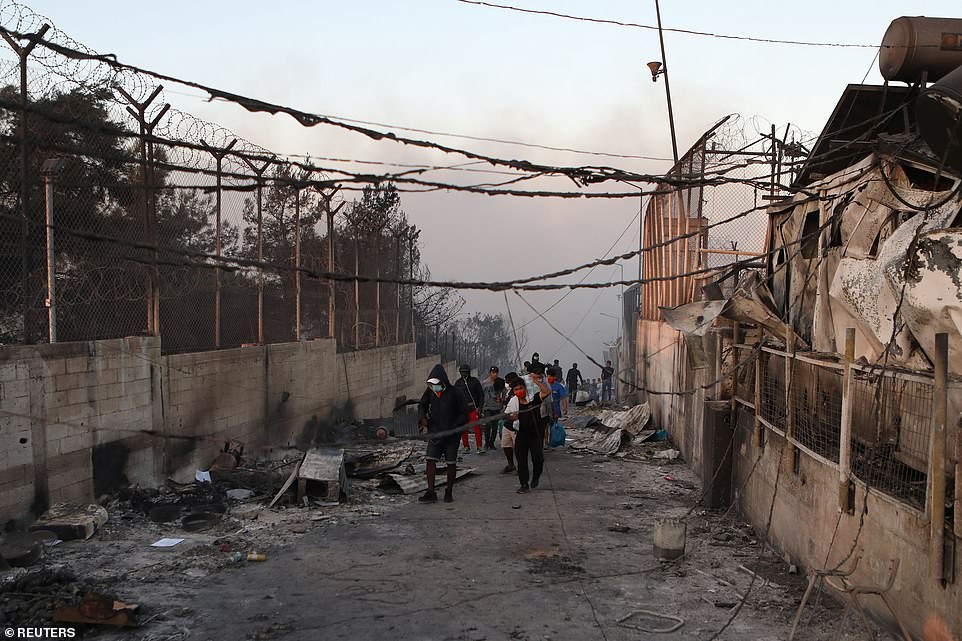 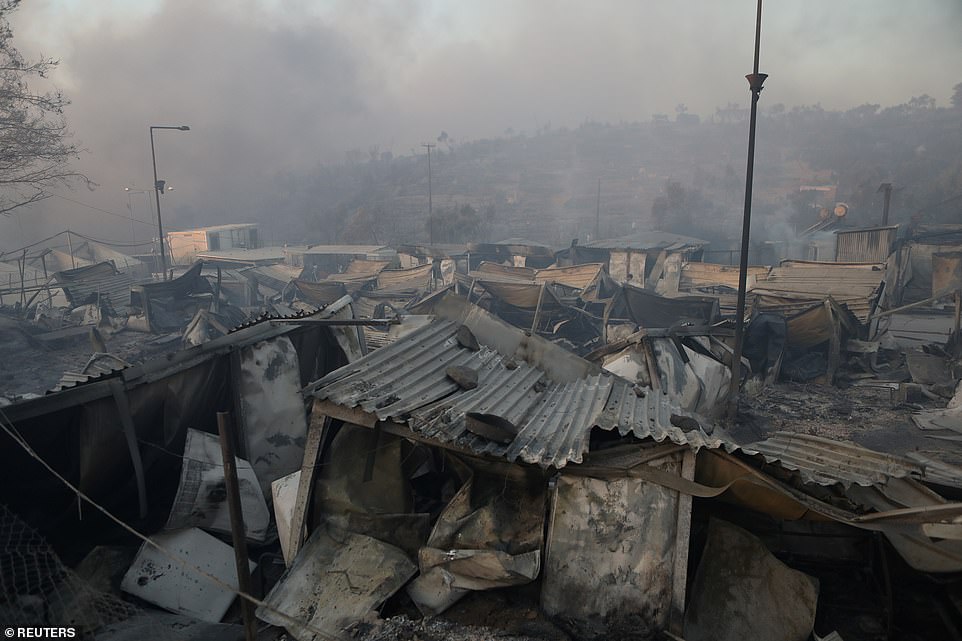 Destroyed tents and shelters smoulder in the early morning sun after a fire gutted the Moria migrant camp, on Lesbos 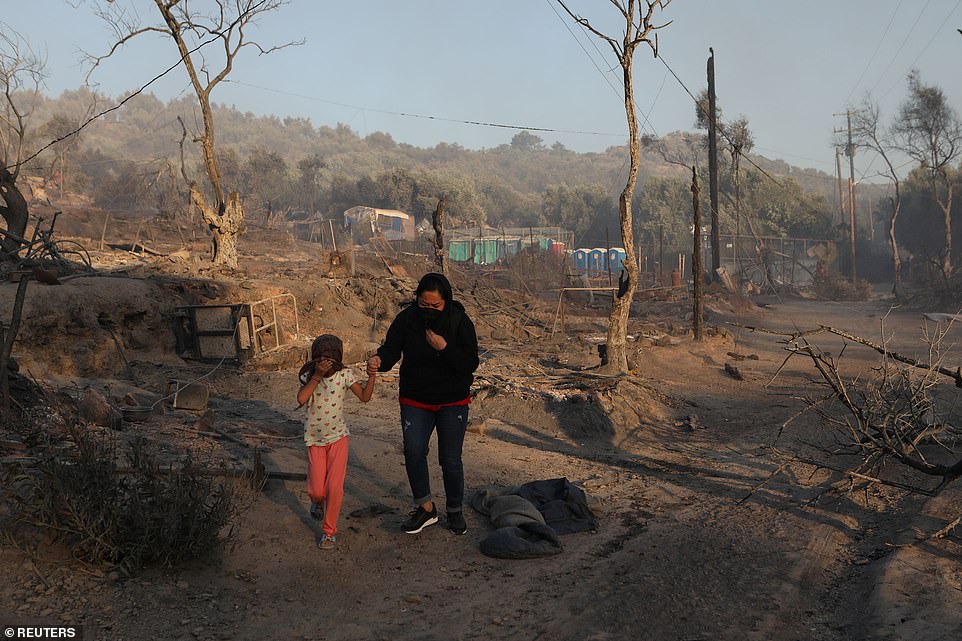 A woman and a girl make their way through the remains of the Moria camp, as Greek authorities scramble to find shelter for more than 12,000 people who called it home 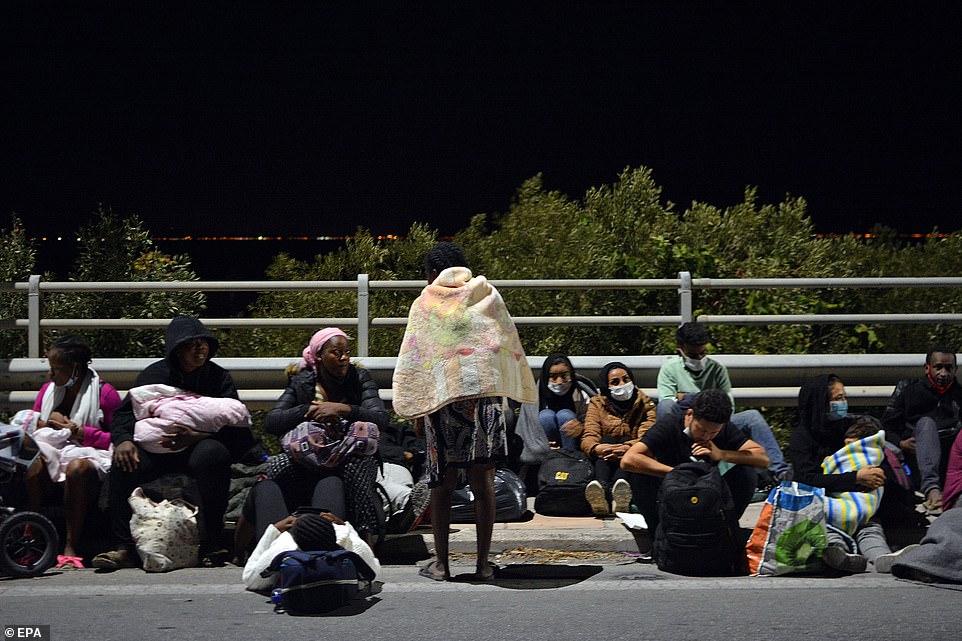 Firefighters also said they had been blocked from entering the camp to battle the blaze by a group of refugees and had asked for police assistance.

The camp has seen a spike in coronavirus patients since reporting its first case last Wednesday, with 35 confirmed infections so far.

Migrant camps on the islands have endured months of lockdowns as a result of the coronavirus pandemic, with access severely restricted.

But at Moria, the restrictions have been harder to enforce because of the large number of asylum seekers sleeping outside the camp’s walls.

Rights groups including the UN refugee agency have urged Greece to reduce congestion in its migrant camps.

The Moria camp, which was built to hold fewer than 2,800 people, had been routinely criticised for its lack of hygiene and overcrowding.

Many refugees have been unable to find lodgings and jobs after leaving the camps, with housing and cash benefits recently scaled back by the government. 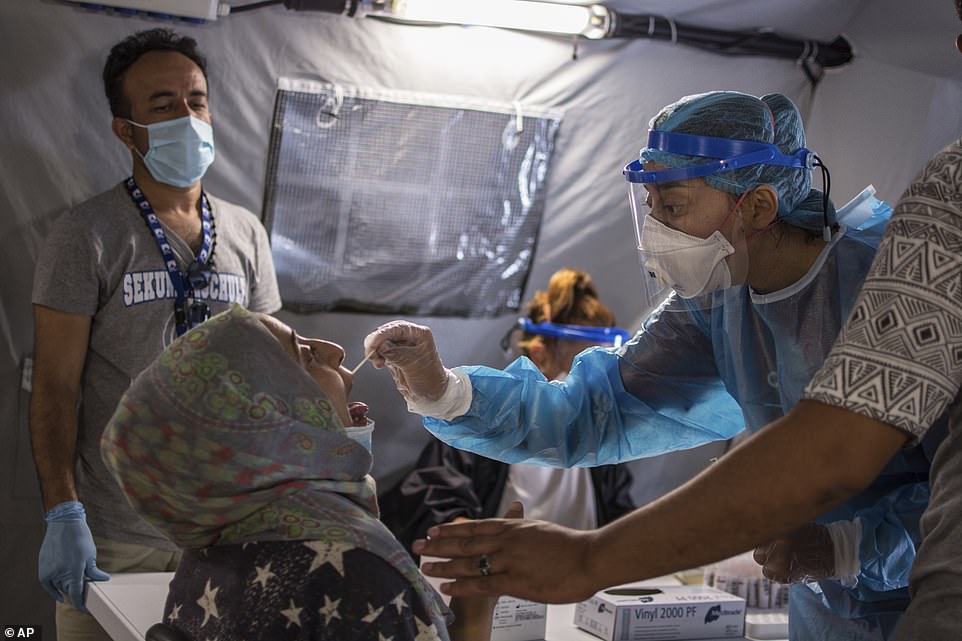 The whole camp was placed under quarantine last week after a coronavirus outbreak was detected inside, with 35 positive cases reported so far (file image) 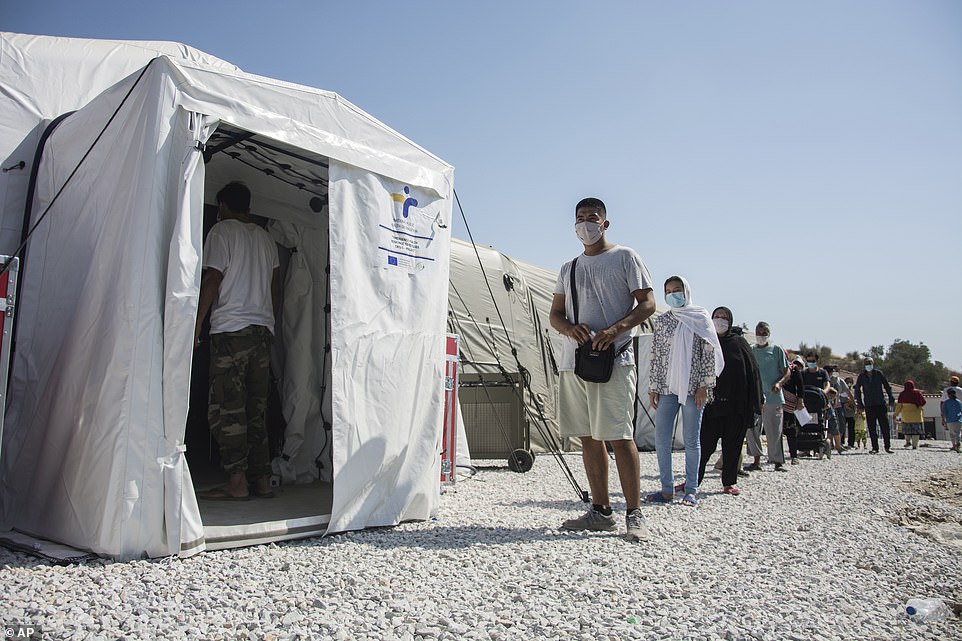 The fire reportedly broke out after 35 migrants who tested positive for coronavirus were being moved into isolation within the camp, sparking protests (file image)