Hurricane Ida could overwhelm levees strengthened to protect New Orleans as it barrels down on Louisiana on the 16th anniversary of Hurricane Katrina.

The storm – whose winds have hit 150mph, with gusts of up to 165mph – is on the verge of becoming a Category 5 hurricane, amid fears it could be one of the strongest to ever hit Louisiana.

Jefferson Parish, which sits close to New Orleans, is said to be particularly vulnerable to a breach.

That would be the first time the newly-upgraded defenses have been breached since they were strengthened in the wake of Katrina, which struck on August 29 2005 and killed 1,800 people. 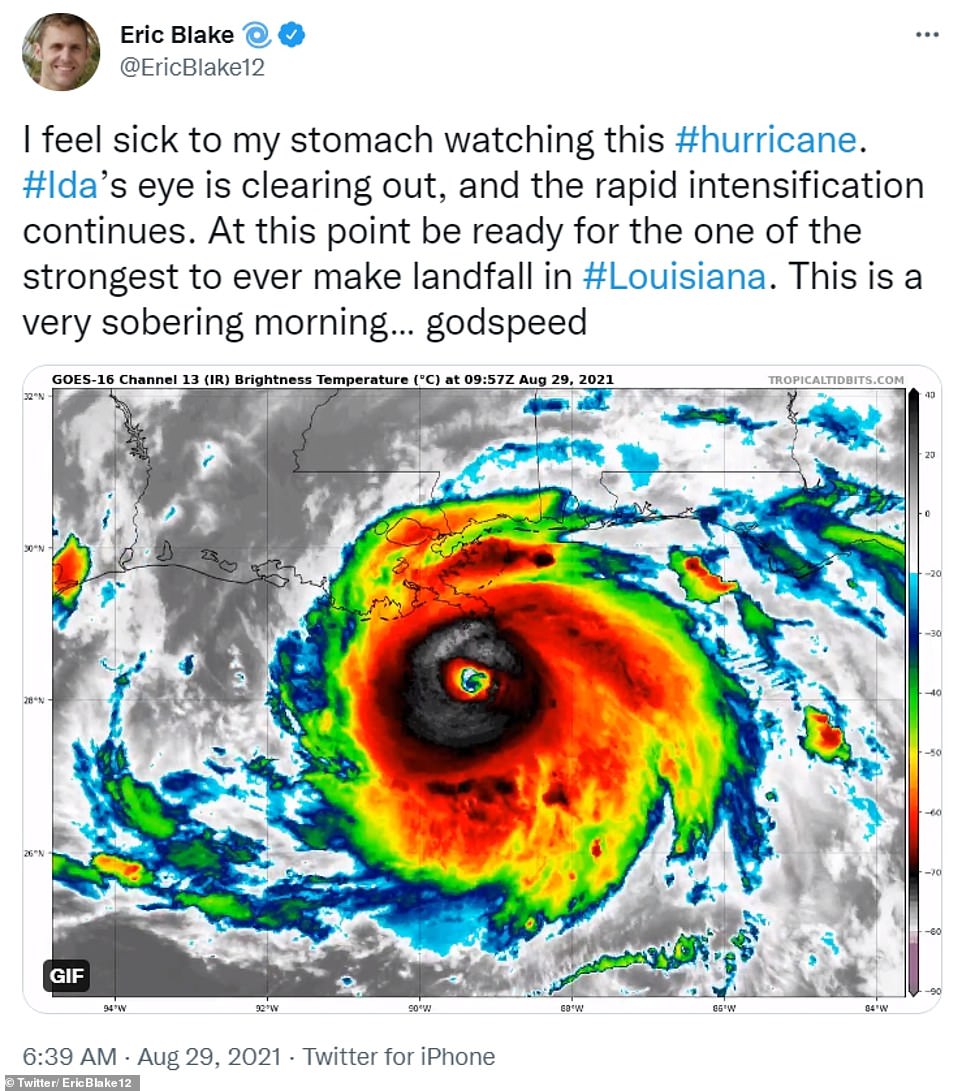 It is currently around 50 miles off the Louisiana coast, and is expected to make landfall later on Sunday.

Evacuations have begun amid warnings of storm surges of up to 15 feet, with Jefferson Parish President Cynthia Lee Sheng saying of the predicted inundation: ‘I want to reiterate, the storm surge that we are expecting is unsurvivable.’

Hurricane expert Eric Blake also tweeted his horror at the weather event, writing: I feel sick to my stomach watching this #hurricane. #Ida ’s eye is clearing out, and the rapid intensification continues. At this point be ready for the one of the strongest to ever make landfall in #Louisiana. This is a very sobering morning… godspeed.’

According to the National Hurricane Center, Ida sustained winds of 150 mph, just 60 miles south of the mouth of the Mississippi River, continuing its way toward Louisiana and the Gulf of Mexico.

It would take merely 7 mph for Ida to transition into Category 5 storm, the NHC said.

With Hurricane Ida intensifying over the Gulf of Mexico Saturday and barreling towards the Gulf Coast, thousands of fleeing residents clogged highways as they raced inland, and the New Orleans airport cancelled all of Sunday’s inbound and departing flights.

As of early Sunday morning, Ida was a Category 3 storm with whipping winds of 115 mph. It was about 145 miles southeast of the mouth of the Mississippi River, according to the National Hurricane Center.

Louisiana Governor John Bel Edwards said that the storm will be ‘one of the strongest hurricanes to hit anywhere in Louisiana since at least the 1850s.’

Forecasters predict it could make landfall by Sunday afternoon or Sunday evening as an ‘extremely dangerous’ Category 4 storm on the five-step Saffir-Simpson scale with winds of 140 mph.

It’s predicted to cause heavy downpours and a tidal surge that could plunge most of the Louisiana shoreline under several feet of water. 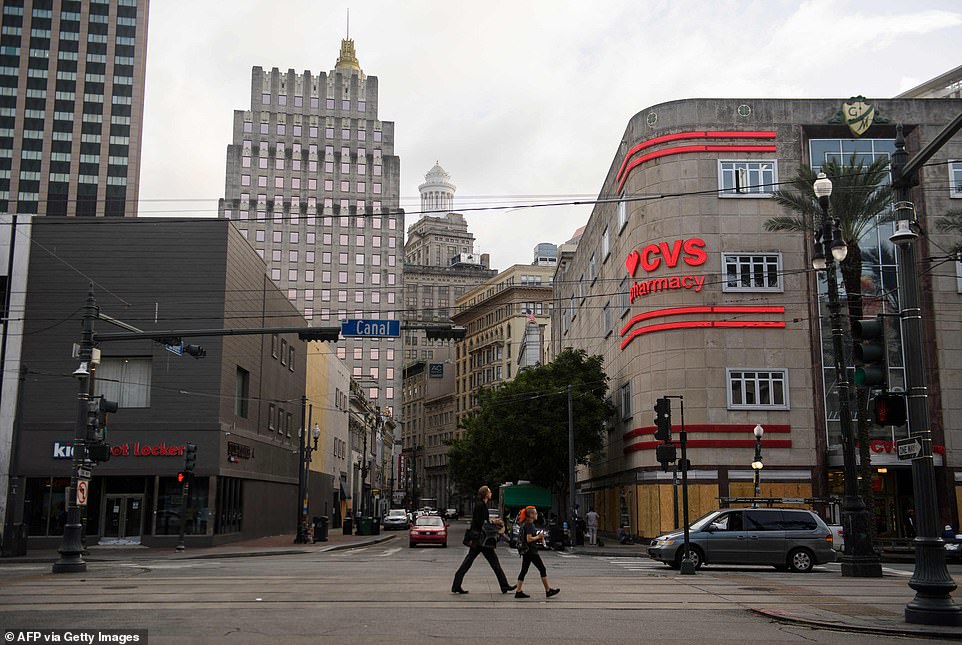 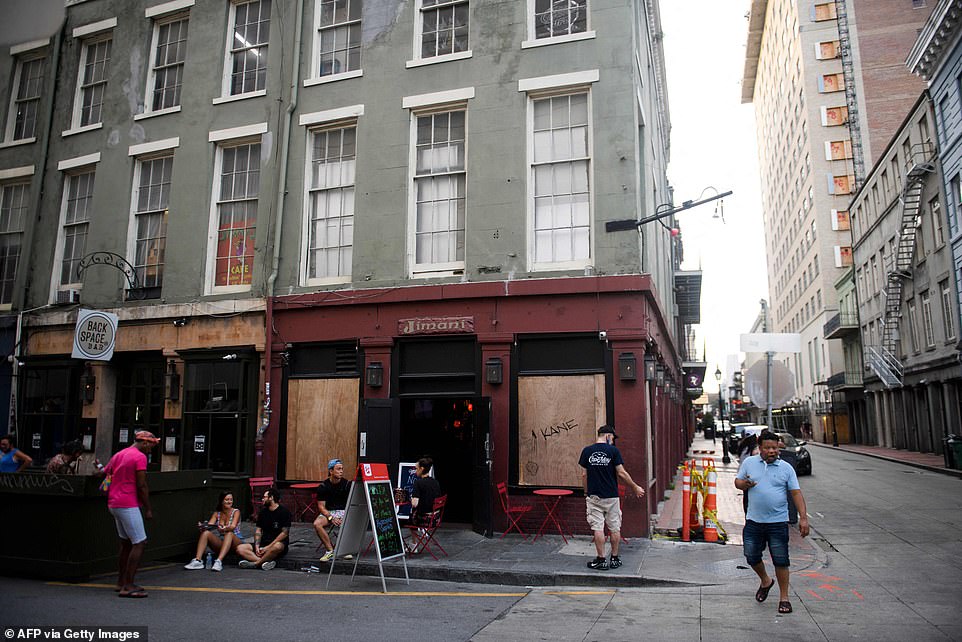 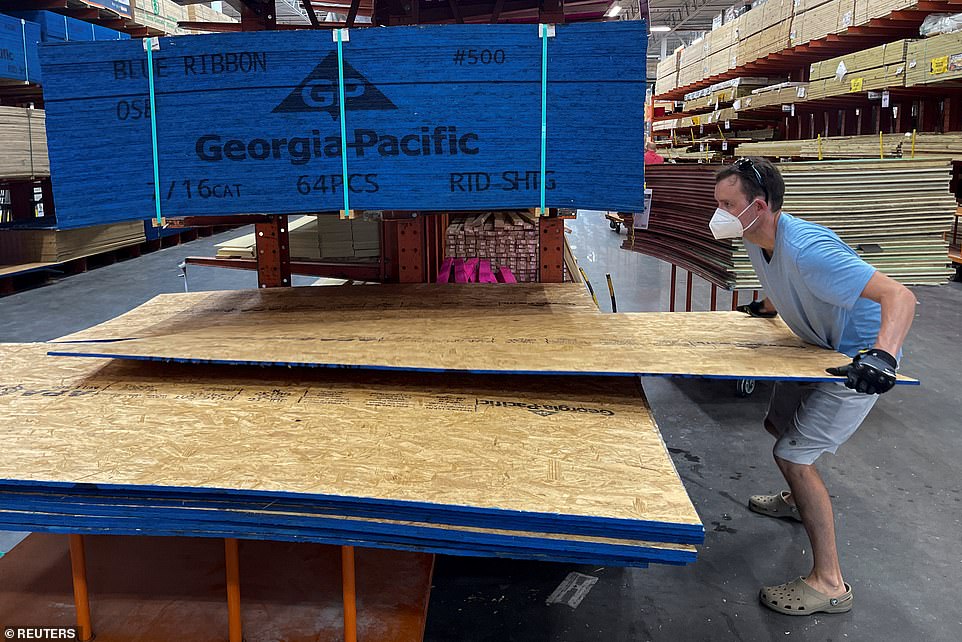 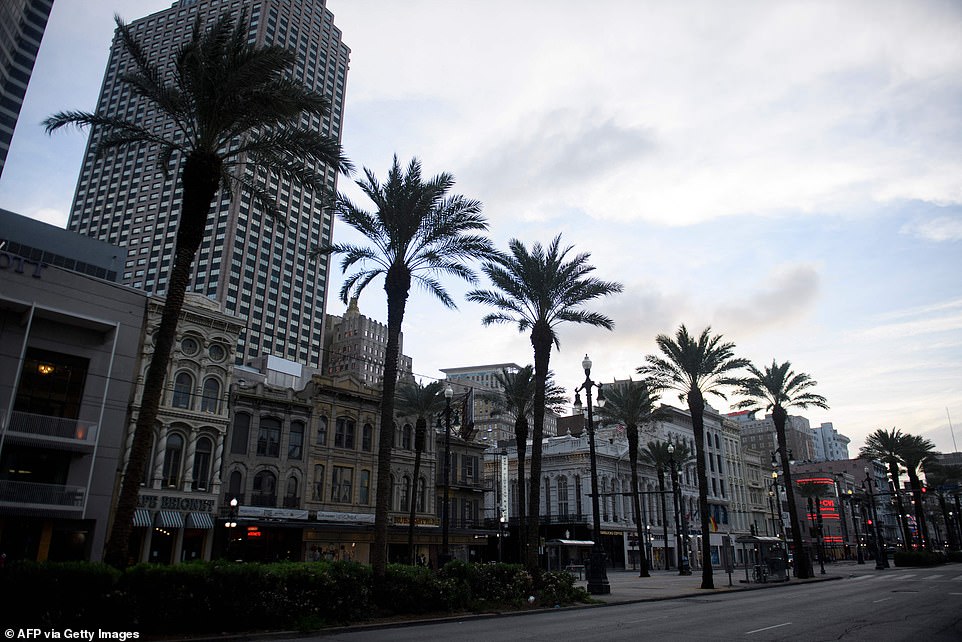 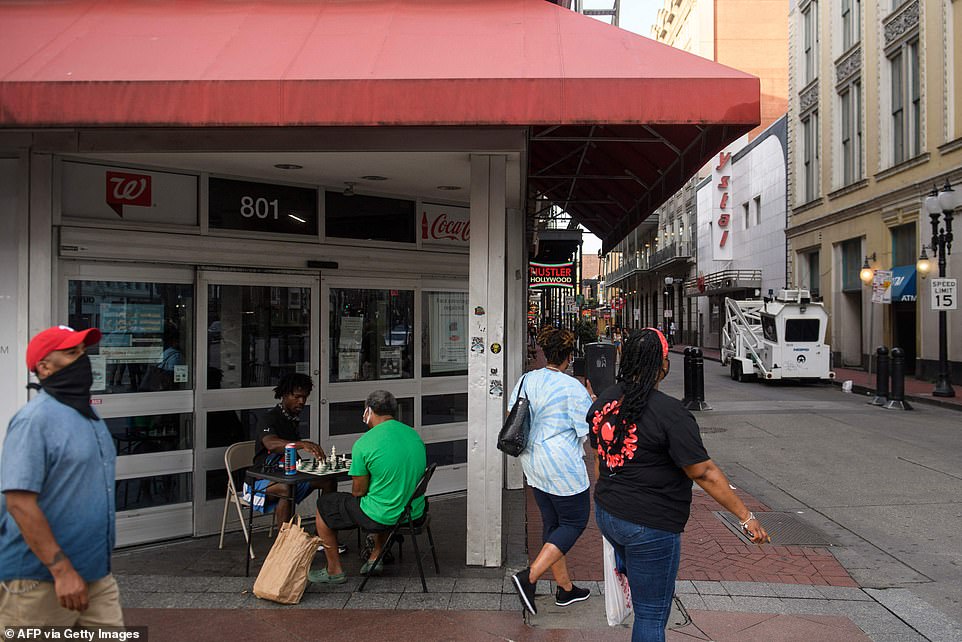 The city’s famed Bourbon Street looked far quieter than usual, as Ida was forecast to hit on the 16th anniversary of Hurricane Katrina

‘We’re going to catch it head-on,’ Bebe McElroy told the Associated Press as she prepared to leave home in the coastal Louisiana village of Cocodrie. ‘I’m just going around praying, saying, “Dear Lord, just watch over us.”‘

Ida was poised to strike Louisiana 16 years to the day after Hurricane Katrina devastated the Mississippi and Louisiana coasts. A Category 3 storm, Katrina was blamed for 1,800 deaths and caused levee breaches and catastrophic flooding in New Orleans, which took years to recover.

Edwards said 5,000 National Guard troops were being staged in 14 parishes for search and rescue efforts with high-water vehicles, boats and helicopters. And 10,000 linemen were on standby to respond to electrical outages.

Jackson, Mississippi Mayor Chokwe Antar Lumumba told CNN during a TV interview at 11pm that he’s most concerned about how city’s infrastructure will hold up and said the city’s hospitals are already filled because of the COVID-19 surge brought on by the ‘Delta’ variant.

For those who will be weathering the storm were reminded by President Joe Biden not to forego COVID precautions: ‘If you have to move to shelter, make sure you wear a mask and try to keep some distance – we’re still facing the highly contagious delta variant as well.’

She called on those planning to flee from the ‘life-altering’ hurricane to ‘do so immediately’ and for those planning to ride out the storm to finish their preparations and shelter in place as quickly as possible.

‘This is our time, your time, to prepare yourselves now. This is it,’ she said.

‘Check on your neighbors, your friends, of course your family, assist them when needed… in Hurricane Katrina, we learned that we are all first responders.’

FEMA is pre-positioning food, water, generators and other resources in the at-risk region, the president’s office said Saturday.

‘I know that tomorrow, for many people, is a very difficult anniversary. It is the 16th anniversary of Hurricane Katrina. I’m also aware that it is very painful to think about another powerful storm like Hurricane Ida making landfall on that anniversary,’ Edwards said at a press conference on Saturday afternoon.

‘Every storm is different. They all bring their own challenges, but I also want you to know that we’re not the same state we were 16 years ago.’

The Governor said that ‘many, many people are heeding the evacuation orders, both mandatory and voluntary.’

Meanwhile, the president implored local authorities to reach out for federal assistance, should they need it, before the projected hurricane makes landfall.

‘I need to know everything you think we need to do,’ he said at a press conference just before 2 pm. ‘If you haven’t gotten the authority for it, tell me now, we’ll get it done.’

‘Thank you, thank you thank you, everything that you’re doing to prepare for this dangerous storm is going to mitigate the impact and potential…. Disastrous results that will [effect] so many people in the region.’

Terrebonne, Lafourche, Plaquemines, Orleans, St. Charles, Port Fourchon and St. Mary Parish all mandated evacuations for some or all of their residents, and New Orleans employers let their employees go home by 6pm so they have adequate time to seek shelter.

Ida was a tropical depression just two days earlier but it strengthened so quickly that New Orleans officials said there was no time to organize a mandatory evacuation of the city’s 390,000 residents.

New Orleans Mayor LaToya Cantrell said the city did not have sufficient time to mandate evacuations inside the levee system, or to open up additional lanes of traffic, known as contraflow, to allow more people to evacuate.

An evacuation of that magnitude requires coordination with the state and neighboring locales so that inbound lanes on are highways can be converted to shunt traffic away from the city.

Even without the mandatory evacuation, traffic on Interstate 10 out of New Orleans was heavy or at a standstill throughout the day Saturday. Roads were congested as early as 4 am.

Reports indicate many more heeded the officials’ warnings and vacated the area, but those who chose to hunker down in New Orleans and the surrounding areas along the coast boarded up their homes and businesses and made preparations.

The city’s emergency planners – simultaneously traumatized and prepared for the worst by Hurricane Katrina – have promised a ‘very robust, very quick, post-storm evacuation.’

Inundated with surrendered pets, Louisiana’s Society for the Prevention of Cruelty to Animals is also at full capacity, and will similarly transition to ‘post-storm operations.’

After Hurricane Katrina in 2005, 70 percent of homes were damaged to some degree, and more than 1,800 people died.

Ten to 15 feet of water is expected to collect around the mouth of the Mississippi River, the National Hurricane Center said, and lower levels of flooding could extend as far east as the coastlines of adjacent Mississippi and Alabama.

Heavy rainfall and flooding have already began to affect Mississippi ahead of Ida’s suspected landfall.

Hailey DeLaune of Gulf told Reuters today that she and her fiancée spent Friday evening amassing provisions and boarding up the windows of his house in Gulfport, Mississippi. 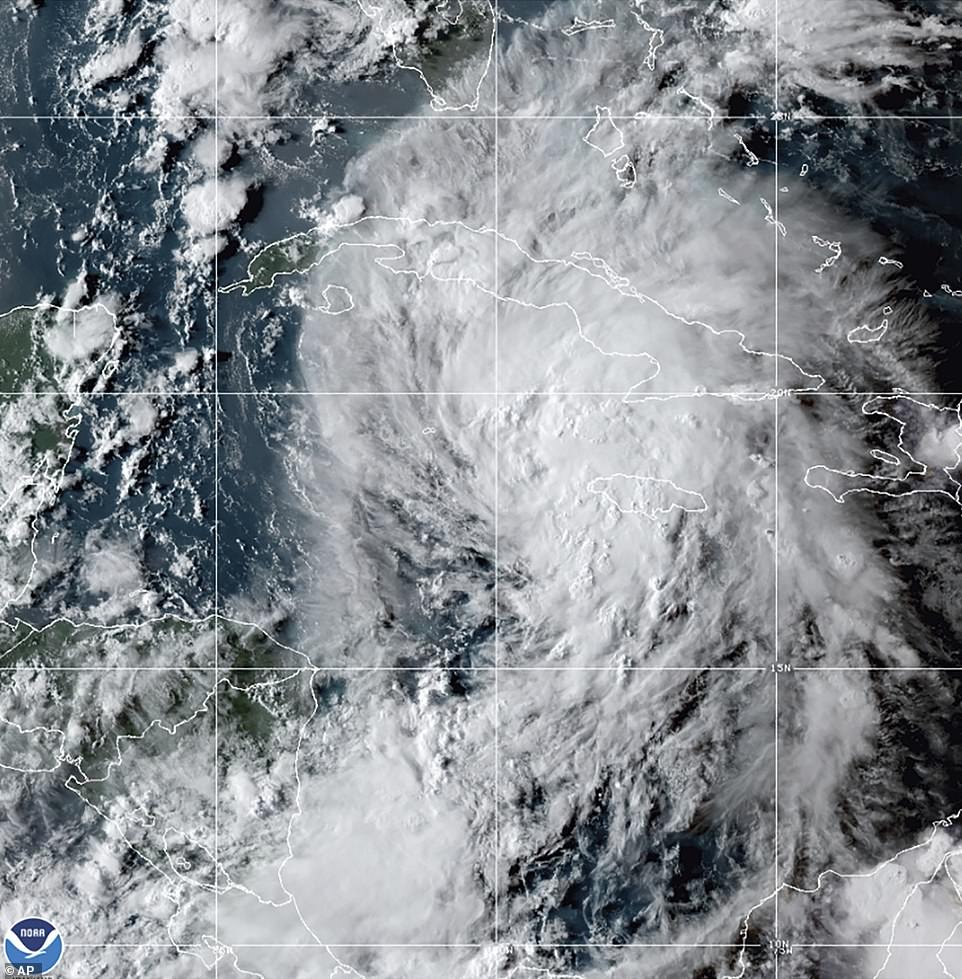 A satellite photo shows Ida over the Caribbean sea, just off the coast of Florida

‘Hurricanes have always been part of my life,’ said Delaune, a high school theology teacher who was born during 1992’s Category 5 Hurricane Andrew. ‘You just run through your list and hope for the best.’

Shelves were seen low on stock at a Walmart on Tchoupitolas in New Orleans, Louisiana ahead of Hurricane Ida on Friday. Breads, meats, snacks, canned meats, cases of water, chips and fans are in short supply.

Shoppers at Costco in New Orleans stocked up on supplies like bottles of water and toilet paper ahead of Hurricane Ida. Lines at gas stations flowed into the streets and an Exxon in New Orleans has already closed its pumps because it is out of gas.

City officials said residents need to be prepared for prolonged power outages, and asked elderly residents to consider evacuating. Arnold said the city could be under high winds for about ten hours. 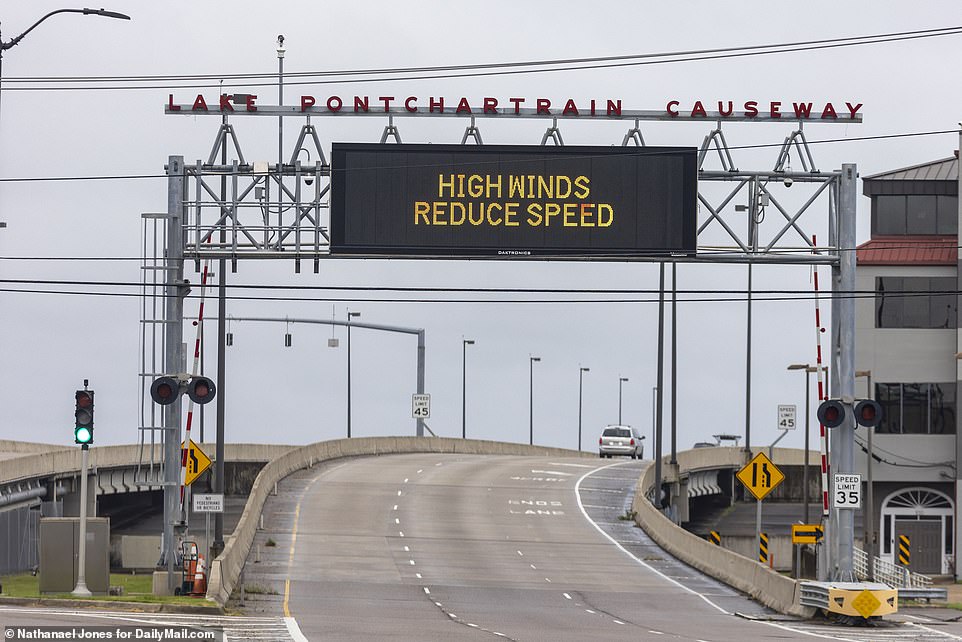 ‘Nobody was out there shrimping today, opening day of shrimp season,’ said George Barisich, a shrimper, to CBS News. ‘So that ought to tell you. When I got in this morning, late last night… about 75, 80 percent of the boats already left.’

Meteorologist Steve Bowen, head of global catastrophe insight at the risk and consulting firm Aon, said the area that was about to get hit is especially vulnerable, with large swaths of industries that could cause environmental damages as well as homes that still have tarps instead of roofs from multiple storms in 2020.

On Friday, Ida smashed into Cuba’s small Isle of Youth, off the southwestern end of the Caribbean island nation, toppling trees and tearing roofs from dwellings.

Jamaica was flooded by heavy rains, and there were landslides after the passage of the storm. Many roads were impassable, forcing some residents to abandon their homes.

Ida, the ninth named storm and fourth hurricane of the 2021 Atlantic hurricane season, may well exceed the strength of Hurricane Laura, the last Category 4 storm to strike Louisiana, by the time it makes landfall, forecasters said.

The region was devastated in August 2005 by Hurricane Katrina, which killed more than 1,800 people.

Many roads were impassable, forcing some residents to abandon their homes.

Hurricane Ida was 105 miles west of Havana and traveling northwest at 15MPH by late Friday night.

As the storm plowed into Cuba on Friday night, the National Weather Service issued a slurry of alarming tweets warning that Hurricane Ida shows ‘no signs on weakening.’

‘If Ida maintains a good inner core it will intensify quickly as it enters the Gulf. DON’T UNDERESTIMATE THIS! If you are asked to evacuate, LEAVE or you’re putting your life in danger!’ the NWS asserted. 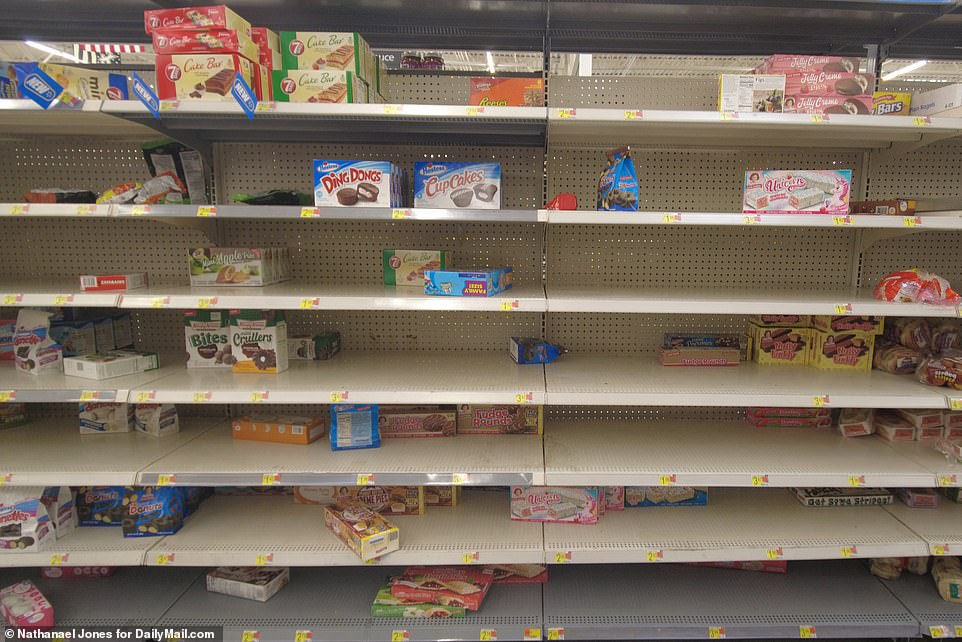 Shelves of a New Orleans Walmart were emptied ahead of the hurricane, set to be one of the worst to ever hit the area

In another tweet, the NWS wrote: ‘The time to act is NOW. Hurricane Ida is now forecast to make landfall as a category 4 hurricane. This will bring SIGNIFICANT impacts to Southern Louisiana and Southern Mississippi. No major changes to the track at this time, moved just a touch to the east.’

‘Along with the change to a Category 4 landfall we also now have upgraded to a Hurricane WARNING for parts of southern Louisiana and southern Mississippi. Damaging winds are expected with Ida and could reach the coast by Saturday night.’

In its biggest weekly gain this year, oil prices shot up by two percent on Friday.

As the storm tore through the Gulf of Mexico on Thursday and Friday, energy companies halted the production of 1.6 million oil barrels and airlifted workers from 90 offshore facilities on Friday and the storm ground through the site of 17 percent of the nation’s oil production.

Production cutbacks have exceeded those spurred on in 2005 by Hurricane Katrina, the cataclysmic storm that devastated Louisiana, killed 1,800 and destroyed more than 850,000 homes. Preceding the earlier storm, supplies were cut by 1.53 million barrels per day; Hurricane Delta reduced the supply by 1.69 million each day.