Thug, 30, who stabbed stag do reveller with a steak knife in a hotel toilet after being told he was blocking view of England Euro 2020 match is jailed

A football fan who stabbed a stag-do reveller after being told he was blocking the view of an England match during the Euros has been jailed for nine years.

Plumb Hysa, 30, brutally knifed the 59-year-old man despite earlier hugging the victim as they celebrated the Three Lions’ quarter final win against Ukraine.

Hysa, of Bootle, Merseyside, later pleaded guilty to wounding with intent to cause grievous bodily harm and possession of an offensive weapon.

He was jailed for nine years at Chester Crown Court on Thursday. 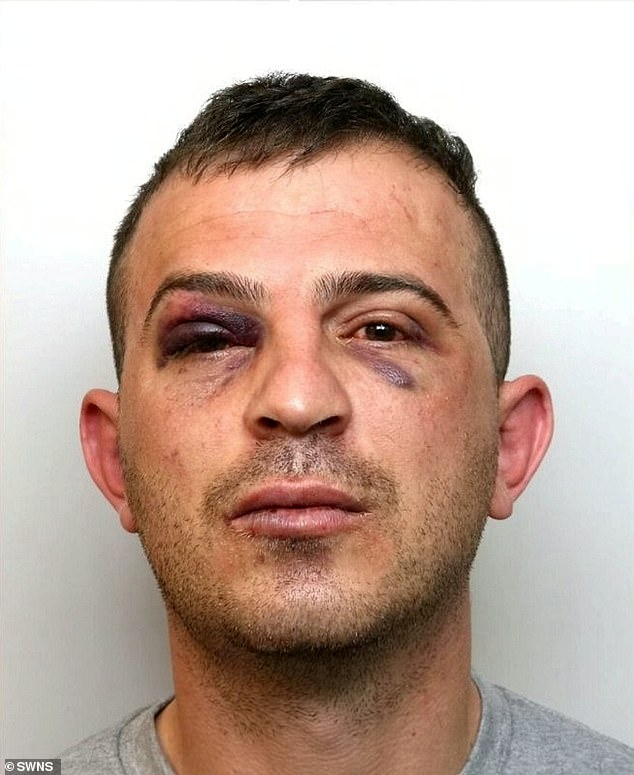 Plumb Hysa, 30, brutally knifed a 59-year-old man despite earlier hugging the victim as they celebrated the England’s Euro 2020 quarter final win against Ukraine. The Albanian national sports two black eyes in his police mugshot after he was punched by the victim’s friend during his arrest

The Albanian national had been asked to stop blocking the TV during the game as supporters gathered at the Mill Hotel, in Chester on July 3.

A court heard he agreed and everything seemed friendly with Hysa even going over to hug and take selfies with the victim as they cheered England’s four goals.

But during the match the thug armed himself with a steak knife which he put under his baseball cap before transferring it to the waistband of his trousers.

The victim then draped an England flag over Hysa and they were seen laughing together as they went to the toilet with their arms around each other.

But once at the urinals the ‘atmosphere changed’ before it ‘kicked off out of nowhere’ and Hysa ‘ferociously’ stabbed his victim three times.

The man required urgent surgery after one of the wounds pierced the small bowel and caused internal bleeding, while one wound narrowly missed his heart. 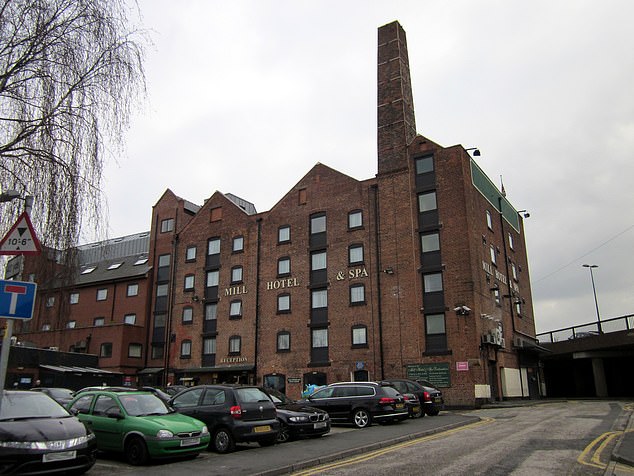 Hysa and the 59-year-old victim had been watching England play Ukraine in the Euro 2020 quarter-final at the Mill Hotel, in Chester. During the match, Hysa armed himself with a knife after the victim asked him to stop blocking the TV, and stabbed his victim three times in the toilets

In his police mug shot released after the case Hysa can be seen sporting two black eyes after he was punched by the victim’s friend during his arrest.

Sentencing, Judge Patrick Thompson said that football matches, particularly involving England, are ones where you expect people to be celebrating loudly.

He added: ‘You commenced a ferocious attack with that knife, during which you stabbed the victim three times, causing him serious injuries.

‘It’s a matter of luck, really, that he was not killed.

‘It’s clear you had lost all sense that night. You were intent on inflicting serious harm on anyone who came your way.’

Prosecutor Simon Duncan said the victim had been with friends as part of a stag party that afternoon with the England match beginning at 8pm.

CCTV footage in the hotel showed that at 7.53pm, shortly before the match began, Hysa was asked and gestured to move as he was blocking the TV.

The matter appeared amicable as the defendant complied but two minutes later Hysa was seen picking up the knife.

There was a further discussion between the two which became heated by 8pm, to the point it attracted the attention of a member of hotel staff.

But moments later, Hysa took out the steak knife and tapped it several times, before concealing it under his shirt before the pair went to the toilet during the second half.

A witness who had been at the hotel with his wife had gone to the loo at about the same time and was in a cubicle when Hysa and the victim went to the urinals.

He heard the two in conversation before hearing the victim say: ‘Put that knife down’ before calling out: ‘He has stabbed me.’

The witness emerged from the cubicle and alerted a member of staff, who in turn alerted the hotel manager while police were called.

Hysa was restrained and assaulted until he let go of the knife, which was placed in the toilet basin.

Police arrived and during his arrest Hysa was left semi-conscious after being punched in the face by the victim’s pal.

The victim was taken to the critical care unit to be treated for life threatening injuries and he required a blood transfusion.

Hysa gave a ‘no comment’ in interview, but provided a prepared statement in which he claimed he had acted in self defence.

In a victim impact statement the man said he still required hospital treatment two months on, he had had difficulty sleeping, and was forced to miss two weeks of work.

Ian Henderson QC, defending, said a pre-sentence report and 15 references had been submitted.

He added: ‘There is a hard-working, decent man in there.

‘He and those around him are keen he pays his penalty to society and goes back to doing what he can.’