The heatwave from hell: Extremely ‘dangerous’ weather conditions stretch 4,500km from Broome to Canberra – as Australia prepares to swelter through 50C days

Australia is set to swelter through almost 50C days as a 4,500km band of extreme weather stretches from Broome in Western Australia to Canberra in the Australian Capital Territory.

The heatwave has been called ‘dangerous’ by weather experts who warn that the hot conditions will be difficult to acclimatise to after a cooler springtime period.

The mercury has already begun rising in the country’s north, and the heat is forecast to extend into central Australia and the east coast on Wednesday.

It will become hotter and more widespread by Friday with temperatures predicted to reach 45C in parts of South Australia, Victoria and New South Wales. 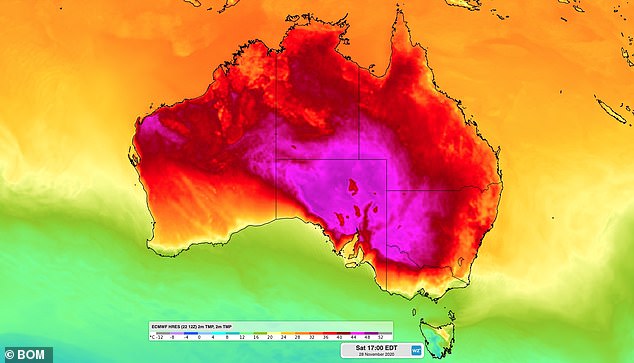 Inland regions will sweat through six straight days of temperatures above 40C. Pictured: weather map for Saturday at 5pm 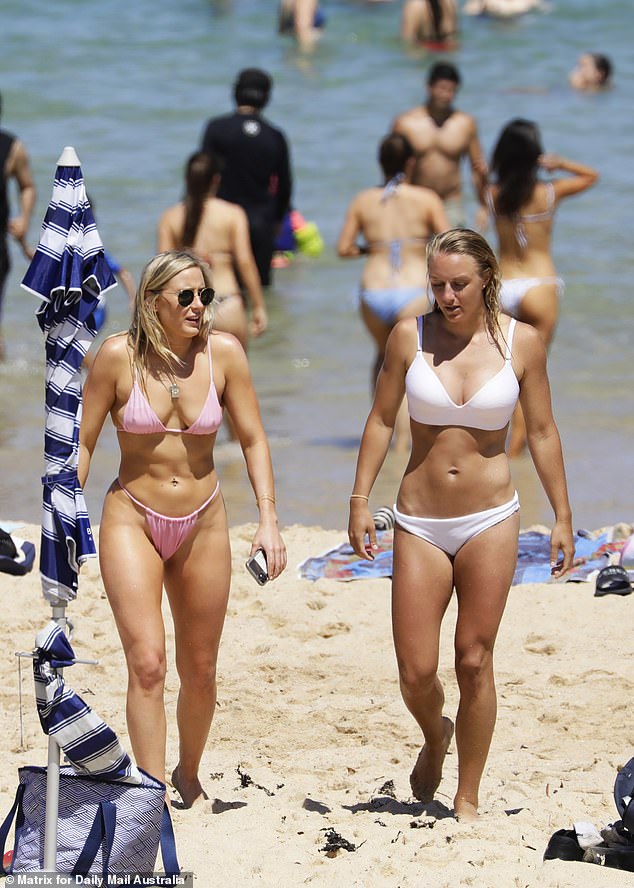 Temperatures are forecast to reach 45C in parts of South Australia, Victoria and New South Wales later this week (pictured: beachgoers enjoy the hot weather at Coggee Beach on Sunday)

South-eastern cities will feel the burn, with Sydney and Adelaide’s CBD tipped to hit 40C, while Sydney’s west will soar into the 40s throughout the weekend.

‘There’s a big build-up of heat in a belt stretching from Broome to Canberra. Once we get to Thursday that will start to kick in across the south and east and peak on the weekend,’ Dr James Goldie from Monash University’s Climate Change Communications Research Hub told news.com.au.

The extreme temperatures are the result of a series of heatwaves battering the nation, with a low intensity wave extending from Broome to Uluru, while a severe heatwave sweeps from Uluru to Canberra.

The unusually high temperatures could carve a new record for the hottest November day in some parts of the country.

Tarcoola, Roxby Downs and Oodnadatta in South Australia, which lie right in the path of the heat band, will see the mercury hit blistering temperatures over the weekend.

Tarcoola is forecast to take the trophy for Australia’s hottest day ever recorded if it surpasses its previous record of 48.7C on Saturday.

Bureau of Meteorology Lead Meteorologist Matthew Bass told Daily Mail Australia the heat will begin setting in for South Australia towards the end of the week. 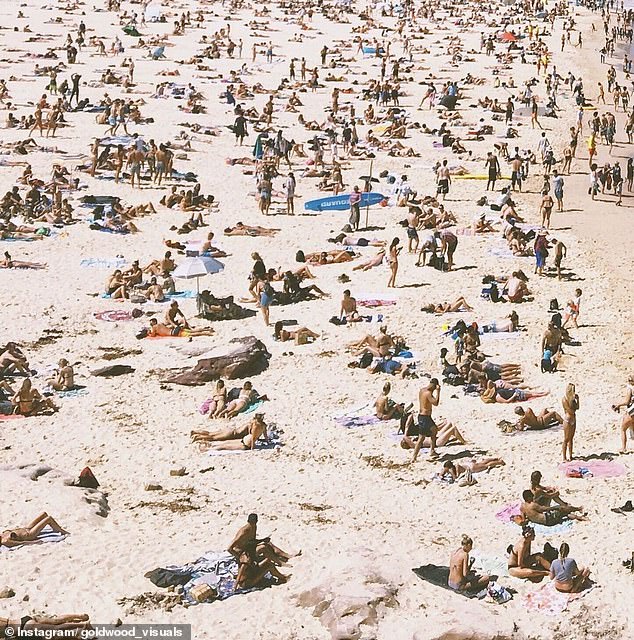 ‘The heat will then be brought down in northwesterly wind to Adelaide, parts of Melbourne and Northern Victoria and inland New South Wales,’ he said.

‘The inland will see the worst of the temperatures and lots of areas are likely to see temperatures of 40-45C through the interior.

‘We’re basically nearing records for the month of November in lots of places.’

This includes Port Augusta in South Australia which is forecast to reach 44C on Friday and 46C on Saturday.

While Mildura in Victoria is set to reach 42C on Friday and 45C on Saturday and Cobar in New South Wales is forecast to have four days above 40C. 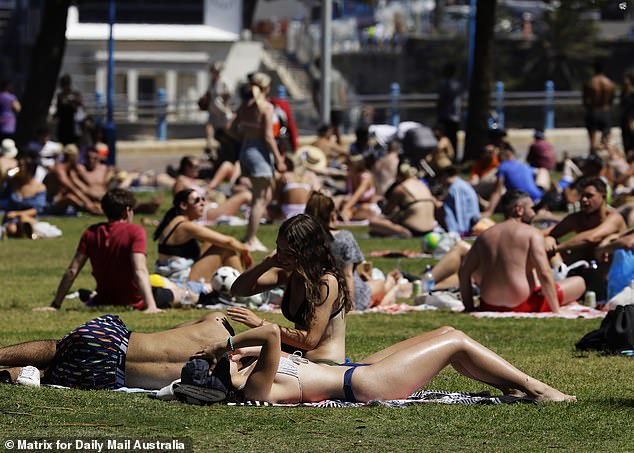 Weather forecasters are predicting a hot, sunny summer despite the impact of a La Niña weather pattern (pictured: sunbathers relax on the grass at Coogee Beach on Sunday November 15) 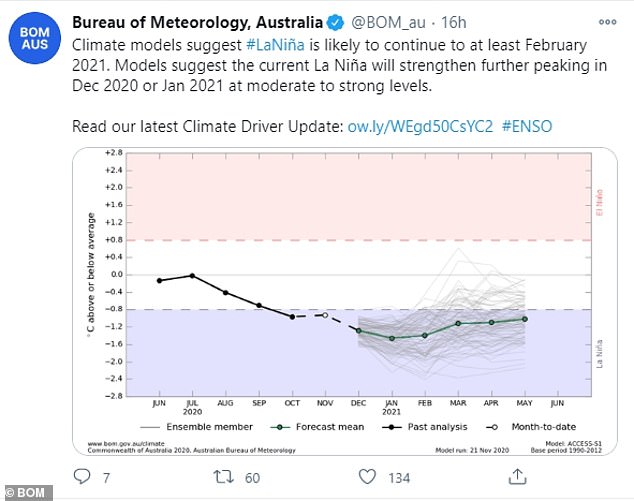 Ecuch and Kerang in Victoria are also highly likely to break their November temperature records of 44C from 2012 on Saturday.

Mr Bass said there may only be a very short reprieve before conditions start heating up again.

‘Broadly across the country the heat actually is going to remain in place for quite a long time,’ he said.

‘The heat remains in place much of this week, and then it kind of recirculates next week.’

The Bureau of Meteorology is forecasting another burst of hot weather for parts of northern New South Wales and the inland of the state on Tuesday.

‘We get some cooling more broadly from Wednesday. But parts of Queensland and Western Australia will still remain quite warm.’

Mr Bass said people need to be aware of the impact of the hot weather and prepare accordingly.

‘The first heat wave can feel more impactful because people just aren’t used to the heat, so just making sure people are ready to adjust for the heat that is coming’ he said.

‘Obviously one of the big risks in heat waves is if you don’t get that cooling overnight.’

Some inland regions will sweat through six straight days of temperatures above 40C, with the mercury in regional Victoria set to climb to 44C.

Mr Saunders said a ‘blistering heatwave will grip Australia’ before peaking on Saturday in the east. 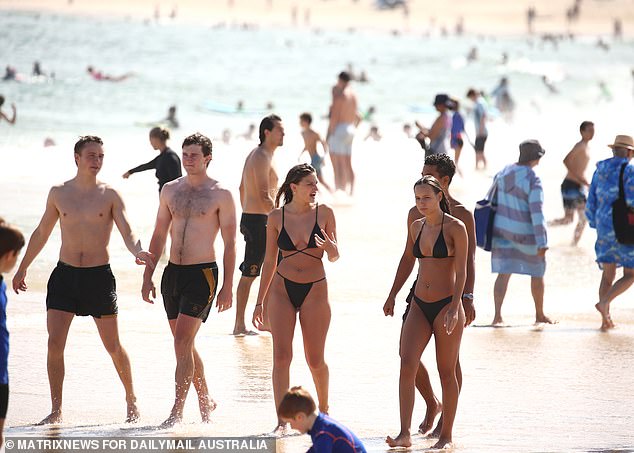 Sydney’s CBD will remain in the mid-20s before jumping to 31C on the weekend (pictured: swimmers emerge from the water at Bondi Beach last Monday November 16) 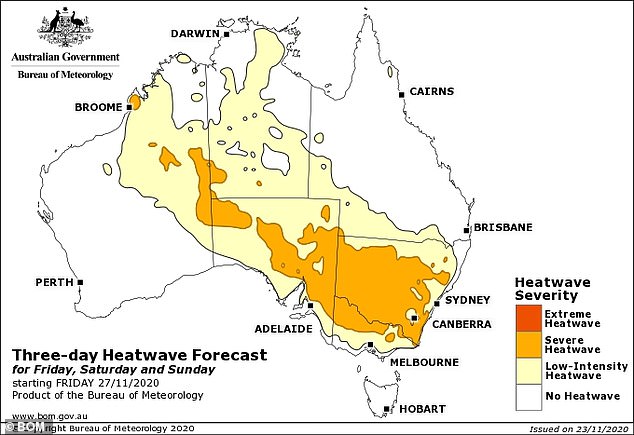 Mildura, in north west Victoria, will swelter through 38C on Thursday before soaring to 45C on Sunday

The conditions are the result of a large area of high pressure system is building in the Tasman Sea, off the coast of NSW and Victoria, bringing hot wind from north west and central Australia.

‘On Saturday, there could be temperatures of over 45C so were talking about all time spring and November records being broken,’ Mr Saunders said.

Mildura, in north west Victoria, will swelter through 38C on Thursday before soaring to 45C on Sunday.

Coastal towns and cities will cool down by Sunday and Monday, but inland areas won’t have any reprieve from the heat.

Broken Hill, Dubbo, Mildura, Griffith, Forbes and Hay are forecast for 40C from the end of the week onward.

Adelaide will reach 33C on Wednesday, soaring to 40C on Friday and 40C on Saturday, before dropping to 30C on Sunday.

Melbourne’s warm weather drastically jump from a top of 21C on Thursday to 31C on Friday. 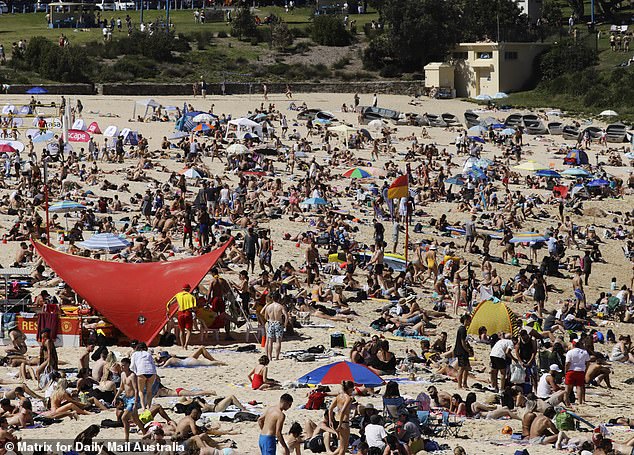 Coastal towns and cities will cool down by Sunday and Monday, but inland areas won’t have any reprieve from the heat (Pictured: Coogee Beach is packed with swimmers on November 15) 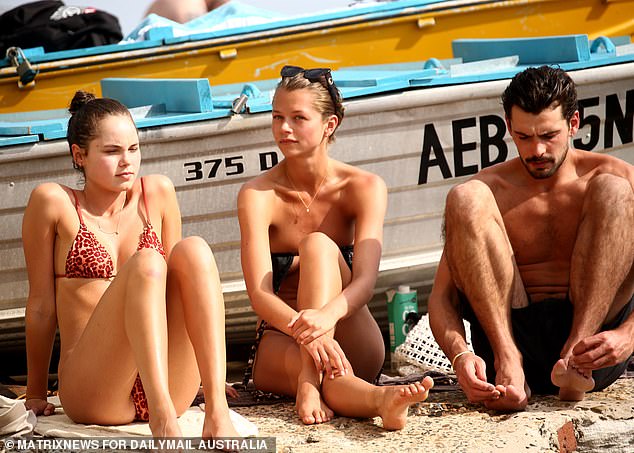 Melbourne’s warm weather won’t be as drastic, with temperatures of 20C set for Tuesday and Thursday, however Wednesday is forecast for 30C (pictured: Victoria’s Secret model Alannah Walton with two friends at Bondi Beach on November 16)

Temperatures will fall into the mid 20s over the weekend with possible showers on both days.

Penrith, in the Sydney’s west, will reach 34C on Thursday ahead of a 36C scorcher on Saturday and Sunday.

Heading north, temperatures will be slightly cooler in Queensland, with Sunday forecast to be the hottest day at 32C.

Canberra will be in the mid twenties until Thursday when the mercury will hit 30C before soaring to 35C on Sunday.

Overnight minimums for the ACT capital will be remain in the low to mid teens.

Hobart will be far cooler than the mainland, with highs hovering around just 20C on Thursday and Sunday.

The Tasmanian capital will have some warm weather in between though, with highs of 27C forecast for Wednesday and Friday.

Darwin will experience thunderstorms this week with tops of 35C and lows of 27C.