Ex-Labour minister Geoffrey Robinson – who faced Commons expenses probe over £30,000-a-year salary paid to a long-term friend working in his office aged 89 – hands back thousands of pounds he was paid ‘in error’ 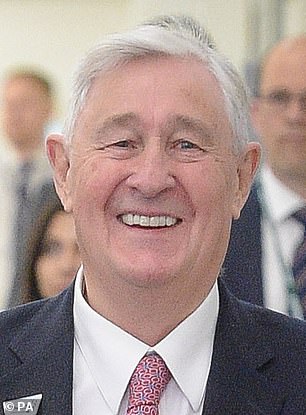 Former Labour Minister Geoffrey Robinson has handed back Commons expenses cash that he was paid ‘in error’.

The Mail on Sunday last year revealed how the millionaire grandee was facing questions over a £30,000-a-year taxpayer-funded salary paid to his long-term friend Brenda Price.

He had told Commons authorities that Ms Price, then 89, was working for him virtually full-time just two months before disclosing that she was so frail that she required round-the-clock nursing care.

Commons officials alerted the police because of suspicions they may have paid wages to Ms Price – on Mr Robinson’s authority – after doctors concluded she was losing her mental faculties.

The former Paymaster General was also granted power of attorney over Ms Price’s affairs while she was still receiving her salary, potentially giving him control over her finances, and charged the Commons nearly £1,000 a month for renting a room in her £600,000 home near his Coventry North West constituency, even after she needed 24-hour care.

Mr Robinson, who stood down at last year’s Election after 43 years as a Labour MP, has previously declined to comment but in a statement last night said expenses had been received ‘in error’ during a period when he was ill.

He said the matter was now ‘concluded’ with the Independent Parliamentary Standards Authority, the Commons watchdog.

‘I have no further case to answer with IPSA in connection with Mrs Brenda Price and expenses, having repaid all monies received in error during a time when I suffered serious ill health, and therefore all matters with IPSA are now concluded,’ he said.

‘The police were promptly informed once parliamentary expenses questions were conclusively resolved with IPSA in March of this year.’ IPSA said the case is still being investigated by Scotland Yard.

‘As the Metropolitan Police investigation is ongoing, we will not be commenting on the details of the case,’ a spokesman said. ‘However, we can confirm the former MP has made a payment to IPSA in relation to this matter.’

Mrs Price died at her detached home in Balsall Common in November, aged 90.

Her will allowed Mr Robinson, if he wished, to stay in her property for the rest of his life. However, last night he said the house is being sold with the proceeds to go to her family.

The Mail on Sunday last year revealed claims in intelligence files that Mr Robinson was a spy who allegedly handed defence secrets to Communist Czechoslovakia during the Cold War. He described the claims as a complete fabrication.