What looks to be a suicidal fish seen innocently swimming after a monster saltwater crocodile is revealed to be George the friendly giant grouper – and he has no reason to fear the apex predator ahead of him.

In a curious video uploaded to Reddit, a large crocodile can be seen cruising out from under a bridge in Port Douglas, Far North Queensland, followed closely by an enormous fish, which actually appears to following the massive reptile.

While the Reddit user who spotted the strange scene believed the fish to be an oversized cod, it’s actually a completely different species.

A fishing tour operator from the tourist spot told Daily Mail Australia the fish in the clip is a local legend, George the Queensland grouper.

George is known for ruling the roost around the public jetty. 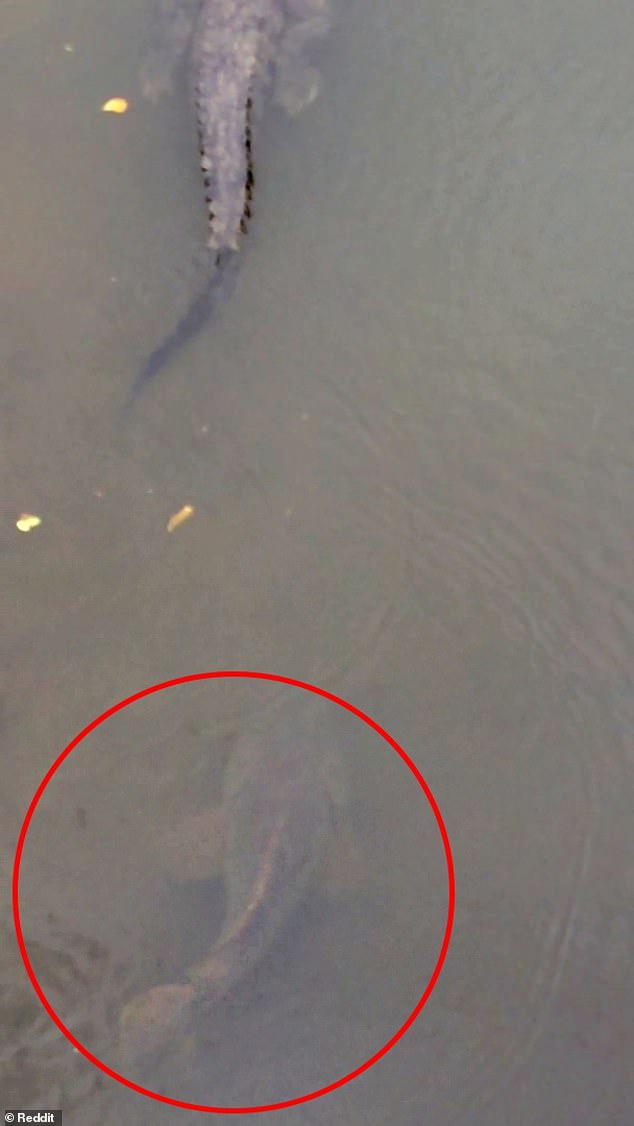 ‘George has been there over 20 years and he wouldn’t be moving out of the way for a croc,’ said Lynton ‘Heff’ Heffer, owner of Fishing Port Douglas.

Remarkably, Mr Heffer says George is so big that he would be telling the croc in the clip to get off his patch, even though it looks to be up to four metres long.

‘George is as big as a 44 gallon barrel, about 300 pounds and about two metres,’ Heff said.

‘A croc usually wouldn’t be able to eat a fish that big, that’s why groupers get to that size, they don’t really have a natural predator.’

George may also be aware that in winter the crocodiles don’t feed as much.

Mr Heffer says it’s too cold for them to easily digest much prey, so crocs are more interested in finding a warm spot to sunbake instead of hunting.

The video shows the huge crocodile emerging from under the public jetty at Port Douglas. Unexpectedly a massive fish comes straight after the croc – and appears to pursue it