An elderly woman is fighting for her life in hospital after she appeared to be struck down by an Iceland delivery van driver who is suspected of driving under the influence of drugs.

Police cordoned off the grocery delivery truck in the middle of Streatham High Road after they were called out at around 11.15am on Sunday.

Met Police confirmed a van driver had been arrested on suspicion of drug driving and remains in police custody. 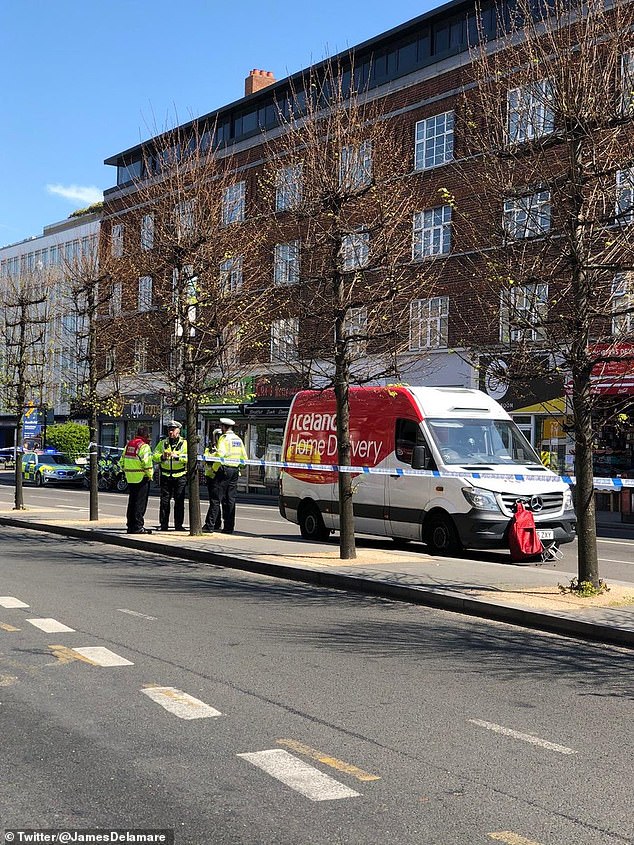 Police cordoned off an Iceland home delivery van in the middle of Streatham High Road on Sunday morning. An elderly woman remains in a critical condition in a south London hospital

Paramedics joined uniformed officers at the scene of the crash near the junction with Becmead Avenue.

A Met Police spokesman said: ‘A van was in collision with a woman, believed to be aged in her 80s.

‘She has been taken to a south London hospital where she remains in a critical condition.

‘The driver of the van has been arrested on suspicion of drug driving and taken into custody.’

One witness saw the cordoned off Iceland van with a shopping trolley at the front of it.

The crash happened around a 10 minute walk walk from Streatham Hill station.

Anyone who witnessed the incident or has dash cam footage is asked to call the Serious Collision Investigation Unit at Catford on 020 8285 1574 quoting 2353/26Apr.