Mock the Week star Ed Byrne has been left devastated after his comedy director brother Paul died at the age of 45.

Paul Byrne had battled Hodgkin’s lymphoma — a type of cancer that attacks the body’s lymph nodes — since 2013.

Comedians John Bishop, Jason Byrne and Phill Jupitus all fundraised for the former director after he was diagnosed at the Edinburgh Fringe.

Today his brother Ed paid tribute to his little brother, saying he will ‘miss him so much’. 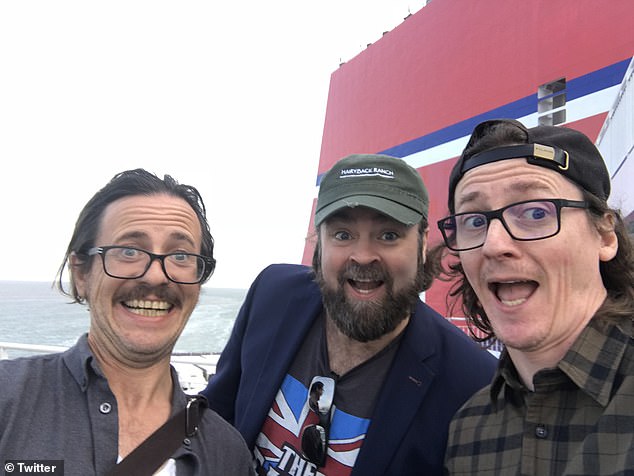 Writing on social media today, he said: ‘Paul Byrne was a lot of things to a lot of people.

‘A talented comedy director and stand up fixer, he was loved by so many. But to me, he was my pain-in-the-arse little brother and I will miss him so much.

Other comics also paid tribute to the award-winning director, who was ‘nearly always the funniest person in the room at shows’.

Omid Djalili said: ‘Very sorry to hear of the passing of comedy director Paul Byrne and younger brother of Ed Byrne — a very dear soul with whom I had many laughs at various Edinburgh festivals.’

Ben Target wrote: ‘Feeling incredibly grateful I got to know and work with him. He always gave generous and honest advice, he knew funny better than anyone.

‘He was beloved by everyone. I will miss him.’

And Tiernan Douieb said: ‘This is really really sad news. Paul directed three of my shows and can honestly say I haven’t had that much fun working on anything since.

‘Truly lovely, brilliant man that was nearly always the funniest person in the room at shows, despite being the one backstage.’

Mr Byrne worked on comedy shows in Edinburgh and abroad, as well as on TV, including talent wrangler on ITV’s Show Me the Funny.

Hodgkin’s lymphoma: A cancer that attacks the body’s disease-fighting network

Lymphoma is a cancer of the lymph nodes, which is the body’s disease-fighting network.

That network consists of the spleen, bone marrow, lymph nodes and thymus gland.

There are various types of lymphoma, but two main ones: non-Hodgkin’s and Hodgkin’s.

Hodgkin’s lymphoma is a type of cancer that starts in the white blood cells. It is named after Thomas Hodgkin, an English doctor who first identified the disease in 1832.

The survival rates are much more favorable than most other cancers.