President Donald Trump will restart his campaign rallies in the next two weeks after being shut in for the past four months, giving his re-election boost a shot in the arm after polls show him trailing Democratic rival Joe Biden.

‘Americans are ready to get back to action and so is President Trump. The Great American Comeback is real and the rallies will be tremendous. You’ll again see the kind of crowds and enthusiasm that Sleepy Joe Biden can only dream of,’ campaign manager Brad Parscale said in a statement.

No time, date or location has yet been named. 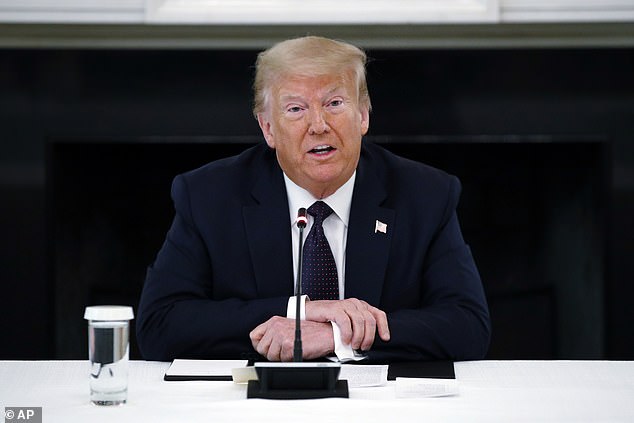 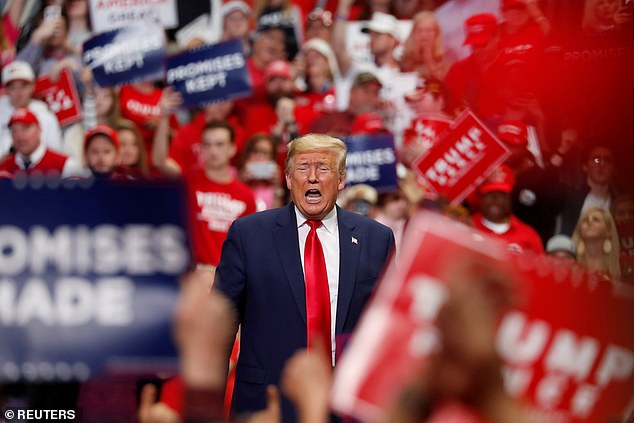 Parscale is expected to present the president with possibilities over the next few days, a campaign official confirmed to DailyMail.com.

The campaign is still debating logistics – such as what cities in what states and what kind of venues. Those decisions will then determine the safety precautions put into place to combat the coronavirus. Politico first reported the news of the rallies returning.

President Trump has been itching to get back on the road.

His last campaign rally was in Charlotte, North Carolina, on March 2. A rally scheduled for Colorado in mid-March was scrapped amid fears of the pandemic.

Trump spent most of the past four months in the White House.

But he started to get out in the last month with short, day trips to visit factories working on medical supplies to fight the coronavirus. He’s also slowly returning to the business of campaigning with two in-person fundraisers scheduled for this month.

However, he has yet to return to the cheering crowds and thundering applause he loves.

Trump feeds off the crowd’s energy and sees rallies as he way of rejuvenating the Republican base.

The announcement from the campaign comes as Trump and his team have been searching for a rallying cry against Biden.

Polls show the president trailing his November opponent as more people criticize his response to the protests and street clashes across the country in the wake of George Floyd’s death.

Trump bashed the findings in a Monday morning tweet, claiming CNN polls are ‘fake’ and that if a Democrat is elected president, they would ‘destroy America.’

‘CNN Polls are as Fake as their Reporting,’ the president tweeted of one of his least favorite news networks. ‘Same numbers, and worse, against Crooked Hillary. The Dems would destroy America!’

Unclear is where the rallies would be held as states are in different phases of reopening amid the coronavirus pandemic, which has killed more than 113,000 people in the United States.

The Trump campaign did not respond to DailyMail.com’s inquiries about how it would handle concerns about the disease as it prepares to get back on the road.

But White House press secretary Kayleigh McEnany in her briefing on Monday indicated how Team Trump would counter safety arguments, pointing out a lack of social distancing between Black Lives Matter protesters.

She argued the media hasn’t covered that coronavirus safety concern but has pointed it out the close crowds in states that are reopening amid the pandemic. 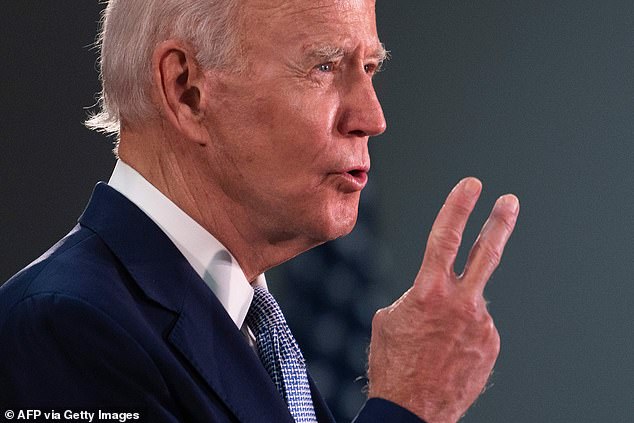 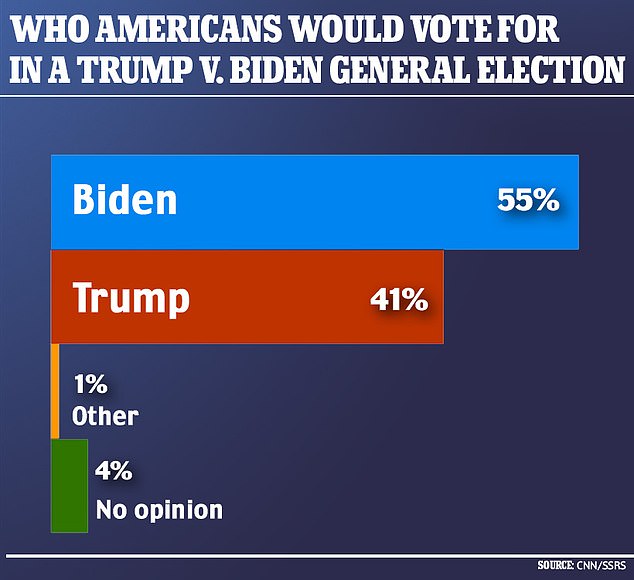 A new poll released Monday shows Joe Biden 14 points ahead of Donald Trump in a general election matchup, as the president comes in with 41 per cent support to the Democratic candidate’s 55 per cent

Trump denounced the CNN poll as ‘fake’ claiming it’s just as bad as their reporting, which he constantly calls ‘fake news,’ and insisted if Democrats were in control they ‘would destroy America’

Trump, meanwhile, has complained Democratic governors are keeping their states closed to hurt him politically.

There are only a few battleground states in the November election that have Republican governors.

Florida, Georgia and Arizona are the ones most likely to welcome the thousands of people that attend a Trump rally.

Ohio is a major battle ground state but Republican Gov. Mike DeWine has been hesitant about reopening.

He told Fox News last week he wouldn’t want Ohio considered for the Republican National Convention after Trump complained the Democratic governor of Charlotte, North Carolina, would not guarantee the state would be far enough along in the opening process to let him have a crowd of attendees this August.

‘These mass gatherings are kind of the last thing to come together, and a mass gathering inside is frankly the thing that would scare us the most about the spread of the virus. The virus is still very much here,’ DeWine said.

In contrast, Republican Gov. Ron DeSantis of Florida and Republican Gov. Brian Kemp of Georgia have openly lobbied for Trump to hold his ‘celebration’ – which would be the night he is formally named the GOP nominee – in their state.

New Hampshire and Indiana also have Republican governors as does Texas.

Texas Gov. John Abbott is a staunch Trump ally and would likely welcome him to the Lone Star State. There is talk Trump could go there in July for the Texas Republican state convention in Houston.

The president will attend a fundraiser in Dallas on Thursday.

Trump has previously complained Democrats will use the coronavirus to try and stop him from winning another term. He’s specifically targeted Democratic governors in battleground states.

‘They’re playing politics, as you know, by delaying the openings,’ he told the Washington Examiner in an interview last month.