Out of a job and onto the street: Couple who lost their income and their home amid coronavirus lockdown reveal hardship of living in a tent with nothing to eat

A couple from Bolton have told how they have lost their income and their home amid the coronavirus lockdown.

Ashley Khan and Katie Bland are now forced to stand in a queues in the shadow of Bolton town hall, waiting their turn to access food at a street kitchen run by support group Homeless Aid UK.

Both of them have been homeless before, but just a few weeks earlier they were living in a shared house and 37-year-old Mr Khan was earning a wage working as a painter and decorator.

Then, the pandemic began and his job disappeared, leaving the pair with no way to pay their rent and no other choice but to go back to the streets. 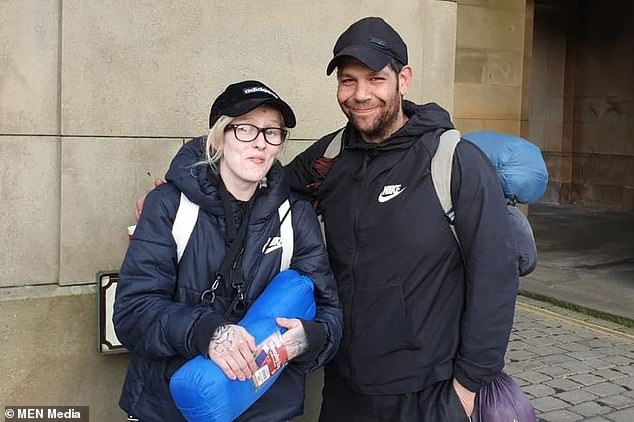 ‘I was working, but the coronavirus situation happened and that led me to being unemployed,’ Ashley explained.

‘I had given my landlord money but once that was eaten away they gave us a notice and said we had to go.

‘Because the weather is OK we came out and we decided to get a tent. I had a little money left from my wages and we started camping in the wild areas of Bolton.

‘We don’t do drugs and we’re not alcoholics we’re just living in the woods at the moment in Rivington. Times are hard, we’ve got no food.’

The government has moved to make sure nobody is evicted from their homes during the crisis, but Ashley and Katie were living in shared accommodation and paying rent in cash so when the lockdown began they were among the people who slipped through the net and were not protected. 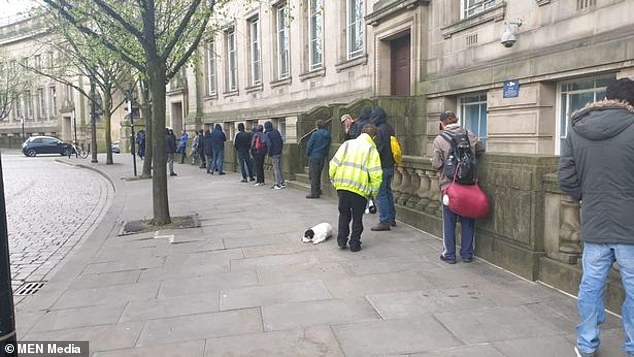 ‘Then the landlord came in and took the keys and said we had until that night to get our stuff out and if we didn’t do it it would get more forceful. Because I didn’t want to get involved we just left.’

While most people are staying in their houses in an attempt to self-isolate, Ashley and Katie have chosen to make their home at a camp in Rivington, far out of Bolton town centre, in an effort to avoid other people.

But, the couple still need to venture into town regularly to get food and any other supplies they can and it was after one of these trips that they returned to find somebody had slashed at their tent and stolen many of 26-year-old Katie’s clothes.

Ashley believes this damage could have been caused by youngsters who came across the tent in the woods and might not have known it was someone’s home.

He said: ‘We were camping in Rivington a few weeks ago and we thought we were out of the way but when we went out someone knifed our tent. 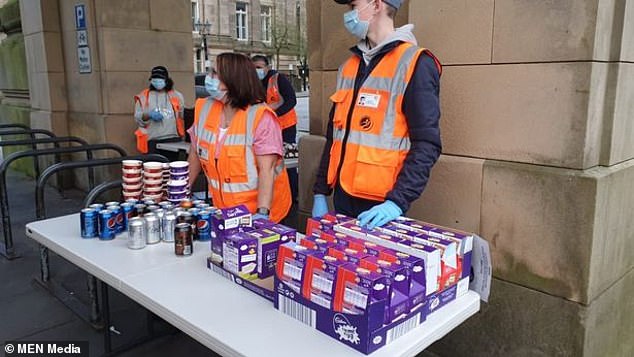 ‘We had tried to hide it away with branches. Maybe someone saw it and found it, I don’t know, but when we got back it was ripped up and somebody had stolen lots of Katie’s clothes.’

Katie added: ‘I’ve literally only got the clothes on my back now. It’s terrible, we can’t even go to charity shops and ask if they have anything to spare because the shops are all closed.’

Since their tent was damaged, the pair have taken to carrying everything they can with them when they travel anywhere, which has been tough during the six-mile walk into Bolton town centre.

‘Yesterday I fell and I smashed my knee and hurt my shoulder pretty badly but we’ve had to find somewhere so far away so we can be away from everyone.’ 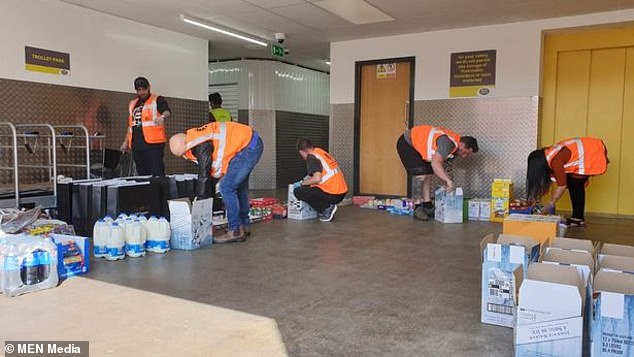 People who sleep rough in Bolton are supported by a number of organisations, including Homeless Aid UK, (pictured above in action) by being provided with food and other supplies

Katie receives benefits from the government and has struggled to find work because of a number of health problems but is keen to try and stay well during the pandemic.

‘I like to keep myself clean and now it’s hard to keep up with that,’ she said.

‘I’m having to wash my hair in cold water – it’s horrible. I have mental health issues and I can’t go to the doctors because they’re closed to most people.’

Despite isolating themselves far away from where most people live, the couple are still concerned about contracting the coronavirus on trips into town.

Katie added: ‘The virus has made us homeless. Now, I’m worried about getting the virus. I was sick for about four weeks recently. I’m not sure if it was the same thing but I had a temperature and I was sick and I had a really bad chest.

People who sleep rough in Bolton are supported by a number of organisations, including Homeless Aid UK, by being provided with food and other supplies.

The coronavirus crisis has added pressure to charities and other support groups.