Viral footage of a coronavirus worker in China lifts her trousers to reveal what appears to be sweat gushing out of her hazmat suit has emerged.

The trending video allegedly shows buckets of sweat splashing out from the inside of a female medic’s protective gears, creating puddles on the floor.

Millions of Chinese web users have been touched by the clip, hailing the health staff as ‘heroes’ for tirelessly fighting against the COVID-19 outbreak during the scorching summer. 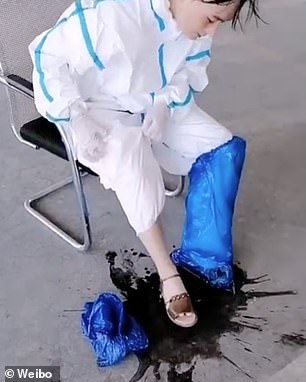 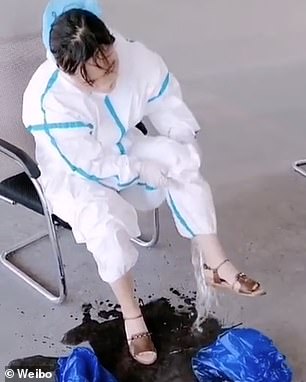 The trending video, believed to be filmed in Xinjiang, allegedly shows sweat splashing out from the inside of a female medic’s protective gears, creating puddles on the floor

The social media footage was reportedly filmed on Saturday when the health worker was taking a break during her shift in Urumqi, the regional capital of Xinjiang in north-western China, according to Chinese media.

It comes after Xinjiang has been battling a local coronavirus crisis that has infected over 500 people since mid-July.

Local authorities have imposed draconian measures and carried out mass-testing in a bid to stamp the infection cluster.

In the viral video, the Chinese woman is seen sitting on a chair while removing blue plastic coverings on her shoes.

She then pulled up the trousers of her hazmat suit as streams of what appeared to be sweat poured out from the clothing.

The average temperature in Urumqi on August 8 was said to be around 29 degrees Celsius (84.2 degrees Fahrenheit).

The video has been quickly shared across Chinese social media platforms as it shows the medical staff’s hard work and devotion while fighting on the front lines against the disease, says state media People’s Daily.

It has touched millions of Chinese web users, who hailed the coronavirus workers battling the country’s health crisis as ‘heroes and angels’.

One commenter wrote: ‘This has brought me to tears. Thank you all for working so hard, our angels!’

Another one said: ‘Oh my god, this is shocking! All the medical staff are our true heroes!’

A third account replied: ‘The summer is so hot and they are wearing so many layers. It’s unimaginable how hard it must be. Thank you!’