New South Wales Premier Gladys Berejikilan and Chief Health Officer Kerry Chant will be up bright and early this morning to hold a press conference at Sydney’s Royal Prince Alfred Hospital, where vaccinations are set to begin from 8am this morning.

I will post the live video in the blog closer to 8am.

A bit later in the morning, Victoria’s Health Minister Martin Foley and testing commander Jereon Weimar will be holding the state’s daily coronavirus update at Melbourne’s Austin Hospital, one of the state’s vaccine hubs.

Their press conference will be at 10.30am, and I will post the video in the blog nearer to the time for it as well.

Keep refreshing the blog, because I will keep this post pinned for the time being and will update it with any other press conferences that get announced for elsewhere in the country.

Police are asking for information and dashcam footage into the crash involving three trucks near the Victoria-South Australian border that killed a man near a COVID-19 checkpoint just hours after the state boundary was snapped shut.

Detectives from the Major Collision and Heavy Vehicle Criminal Investigation Units said the exact cause of the collision is under investigation and asked for interstate truck drivers who witnesses the fatal collision in Serviceton earlier this month to come forward.

Investigators believe truck drivers from either South Australia or New South Wales may have further information about the incident, which left all three trucks on fire just hours after COVID-19 travel restrictions were reimposed in response to a growing outbreak in Melbourne.

Investigators say that a B Double truck crashed into the rear of a stationary B Double truck at about 2.20am on February 11. They say the truck which had been stationary then collided with a B double truck in front of it and all three vehicles caught fire.

The driver of the first truck, a 46-year-old man from Parafield Gardens, South Australia, died at the scene.

The driver of the third truck, a 50-year-old man from Melton, Victoria, was uninjured, police said.

Paul Freestone, managing director of Freestone’s Transport, said when the accident happened, that he understood from drivers at the scene that traffic had backed up for many kilometres at the time of the accident.

“There were 150 cars and it [the line] was all the way back to Kaniva,” he told Melbourne radio station 3AW. [A truck driver] came along and he didn’t realise they were all stopped and he was also carting chemicals.

“There’s absolutely no reason for these trucks to be stopped,” he said, crying.

The Australian Open trophy presentation at the men’s final was at times drowned out by constant crowd booing after mentions of the coronavirus vaccine rollout and the Victorian government.

Tennis Australia President Jayne Hrdlicka was forced to pause during her speech when she mentioned the rollout of the COVID-19 vaccine, which launched on Sunday.

You can watch what happened below: 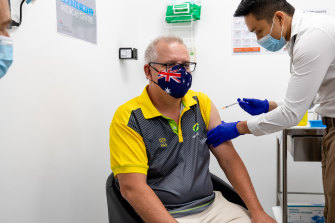