Could Edwards walk free if found not guilty?

If Justice Hall finds Mr Edwards not guilty of the three murder charges, the 51-year-old will remain in prison, where he has been since his arrest in December 2016.

The Telstra technician has pleaded guilty to the abduction and rape of a 17-year-old girl from Claremont in 1995 and a sex attack on an 18-year-old woman inside her Huntingdale home in 1988.

He was linked to the crimes in 2016 through DNA evidence, and changed his plea to guilty for the offences on the eve of his murder trial.

He is yet to be sentenced for the two crimes, but is facing decades behind bars for two counts of aggravated sexual penetration without consent, two counts of deprivation of liberty and one count of break and enter a dwelling with intent.

The case against Bradley Edwards for each of the victims

Catch up on the case against Bradley Edwards for each of his alleged victims by reading our four-part series wrap of the trial below.

The long road to justice for victims' families

It has been 9008 days since Sarah disappeared.

And 8595 days have passed since Ciara vanished.

Their families have spent that time waiting for justice, desperate for answers to what happened to their daughters.

Two years after Ciara's death, her father Denis Glennon told The Irish Times how his life had changed since her passing, with the family finding comfort in their faith.

"Finding the perpetrator will be like closing a chapter but it also means that the whole horror of what happened to Ciara will be revealed and I am not looking forward to that for any of our sakes," he said. 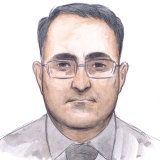 A sketch of Bradley Edwards on day two of his trial.Credit:Nine News

It's Heather McNeill here. I will be running our blog live from inside the courtroom today after sitting through the longest murder trial in WA history.

Justice Stephen Hall, who has spent the past three months considering the evidence presented by the prosecution during the 95-day trial, is expected to hand down his decision from 9.15am.

Bradley Edwards, 51, is accused of three counts of murder over the deaths of Sarah Spiers, 18, Jane Rimmer, 23, and Ciara Glennon, 27, who all disappeared from Claremont's entertainment precinct in the mid-90s.

Courtroom 7.2 in the Perth District Court will likely be at capacity, as much as coronavirus restrictions can allow, with two overflow courtrooms being made available in anticipation of the immense public interest.

WAtoday will bring you live updates from inside the courtroom as the morning unfolds, as well as the reactions of the victims' families, police and Mr Edwards' family.

To catch up on our live coverage of the trial, and the prosecution and defence's closing arguments, click here.