Captain Sir Tom Moore has been fundraising from the grave as people purchase his Number 1 single You’ll Never Walk Alone in the wake of his death.

The song has also re-entered at Number 10 on this week’s Official Download Chart.

The fundraising hero passed away on Tuesday afternoon after being admitted to hospital with coronavirus.

Captain Tom touched the nation’s hearts and raised £33million for NHS charities by doing laps of his garden during the first lockdown. 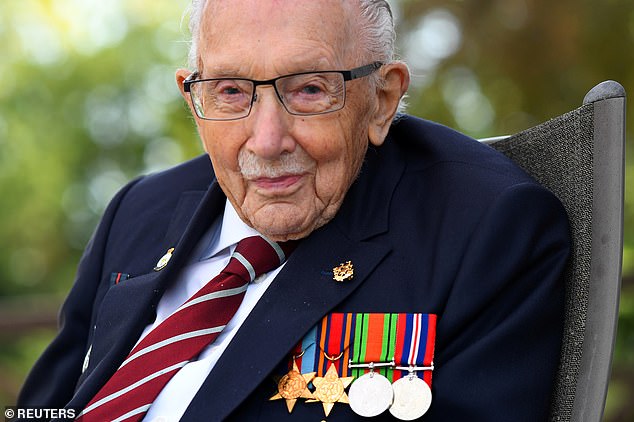 Among the slate of achievements in the extraordinary final year of his life, Captain Tom became the oldest person to reach Number One in the charts, with a version of You’ll Never Walk Alone with Michael Ball.

Following his death, sales and streaming of the song have surged by 1864% according to Official Charts Company data.

Captain Tom performed the song alongside singer Michael Ball and The NHS Voices of Care Choir in April 2020.

It comes as Downing Street is understood to be considering plans to name one of Boris Johnson’s 40 new hospitals after the campaigning war veteran.

The Prime Minister made a manifesto pledge during the 2019 election to build 40 NHS hospitals across the country in the next decade. Although no decision has been made on which could bear Captain Tom’s name, new hospital buildings will be added to the Leeds General Infirmary site which is near to his home town of Keighley.

A No 10 source said: ‘Captain Sir Tom Moore raised an extraordinary sum of money for those working in our NHS, and naming a hospital after him will be a fitting tribute to those efforts.

The Government will consult Captain Tom’s family, the NHS, NHS Charities Together for which he raised the money, and the public if the idea is approved.

It also emerged yesterday that a Leeds-based designer has already created a life-size bronze statue of the hero which he plans to donate to his family. Tony Clark commissioned the sculpture which was made in Indonesia and shipped to Britain last year.

He hopes to raise £60,000 to cover his costs and will then donate 10 per cent and any additional funds to the Captain Tom Foundation. The statue will then be given to the family to erect in a location they deem to be most fitting, he said.