Cafes, pubs and restaurants will be able to sell food and drink from street stalls within weeks under plans to ease lockdown

Pubs, cafes and restaurants with outdoor spaces could be allowed to reopen as market-style stalls in just weeks, as ministers plan to relax outdoor seating licences.

Businesses that hold a licence for outdoor seating will be given government guidance on how to reopen in a limited capacity from June 1, in order to bolster the hospitality industry.

While ‘blanket permission’ could be issued to businesses wanting to add seating to their premises, they currently face a cost of up to £300.

Nicholas Boys Smith, the Founding Director of Create Streets, has advised Robert Jenrick, Secretary of State for Housing, Communities and Local Government, to make it easier for businesses to licence outdoor seating to ease the transition back to normality, reports The Telegraph.

A popular cafe with celebrities Daylesford in Westbourne Grove defies Boris Johnson’s orders to close and to have no seating. March 21 2020

From July 4 small open-air weddings, conducted in socially distanced conditions in front of churches, could also be permitted as the ‘third step’ of Prime Minister Boris Johnson’s roadmap out of lockdown.

On Friday talks with Most Rev Justin Welby, the Archbishop of Canterbury, and Ephraim Mirvis, the Chief Rabbi, saw government lay out plans to allow private prayer in places of worship from July, reports The Telegraph.

Johnson is also understood to be considering the temporary easing of Sunday trading laws to allow key workers more time outside of shift hours to buy shopping during quiet opening hours.

The PM revealed in a public address to the nation on Sunday night that some hospitality businesses could reopen on July 1, if they can create a socially distant environment in their establishment. 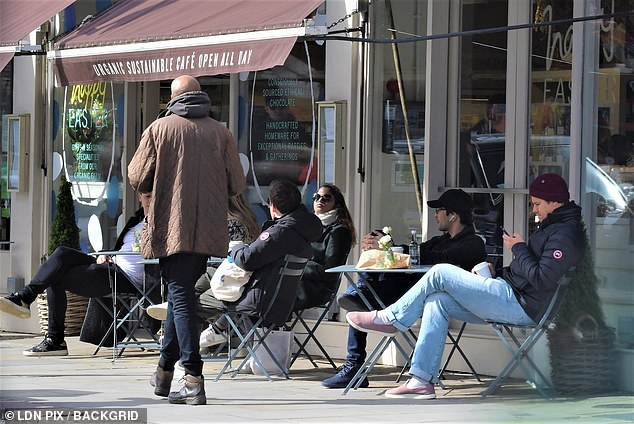 Premises have been allowed to operate take-away services during the lockdown in an attempt to keep businesses afloat. Cafe in Daylesford, Westbourne Grove, defies government orders

Premises have been allowed to operate take-away services during the lockdown in an attempt to keep businesses afloat.

A Whitehall source told The Telegraph that adopting outdoor business could mean a ‘more vibrant style of continental town centres in the summer’.

Professor Alan Penn, a member of SAGE, the Government’s Scientific Advisory Group for Emergencies, reassured that those venturing outdoors that the risk of catching the virus outside is lower.

He said: ‘The science suggests that being outside in sunlight, with good ventilation, are both highly protective against transmission of the virus.’

Other scientists say they ‘totally agree’ with Professor Penn and advocate spending more time outdoors, where the virus is less likely to survive.

People are more likely to catch the infection in enclosed spaces with other people, where ventilation is poor and strangers touch the same surfaces regularly.

Viruses may be less able to survive on surfaces outside in sunlight, as UV damages their genetic material, meaning people are less likely to pick them up, scientists say.