Britain gets back to work: Builders line up at construction sites while Tubes and roads get busier by the day hinting daily grind has returned for thousands – as Aston Martin and Taylor Wimpey announce plans to restart next month

Construction workers failed to properly socially distance today as they headed back to building sites in London despite the ongoing coronavirus lockdown.

A group of about 50 builders underwent temperature checks before being allowed onto the site at No. 1 Palace Street featuring 72 luxury flats near Buckingham Palace.

It comes after the Unite union warned that construction workers’ health is being threatened by watered down advice on social distancing on building sites.

Prime Minister Boris Johnson ordered the unprecedented lockdown on March 23, and on April 16 this was extended for at least another three weeks until May 7. 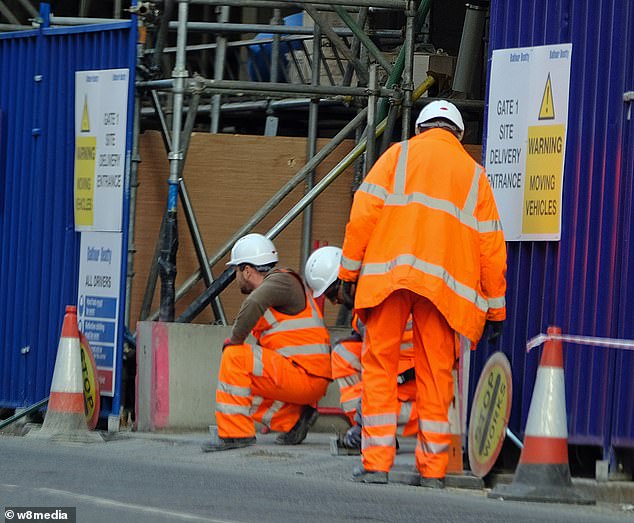 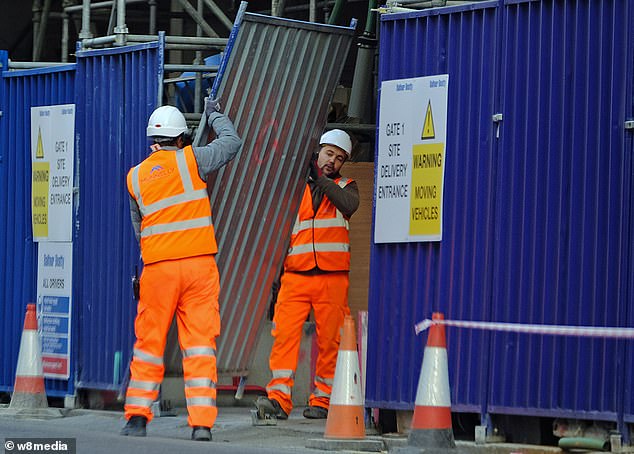 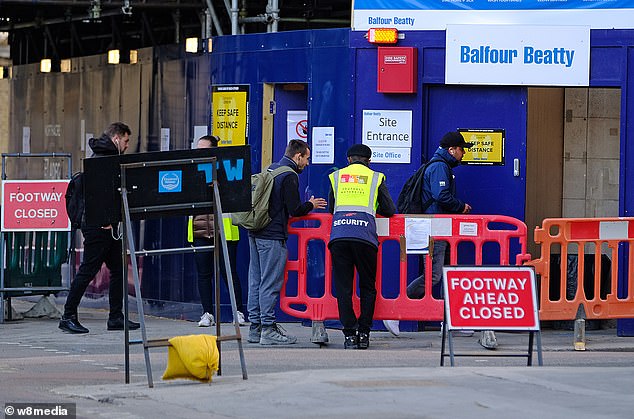 Builders arrive for work at the No. 1 Palace Street site today which will feature 72 luxury flats 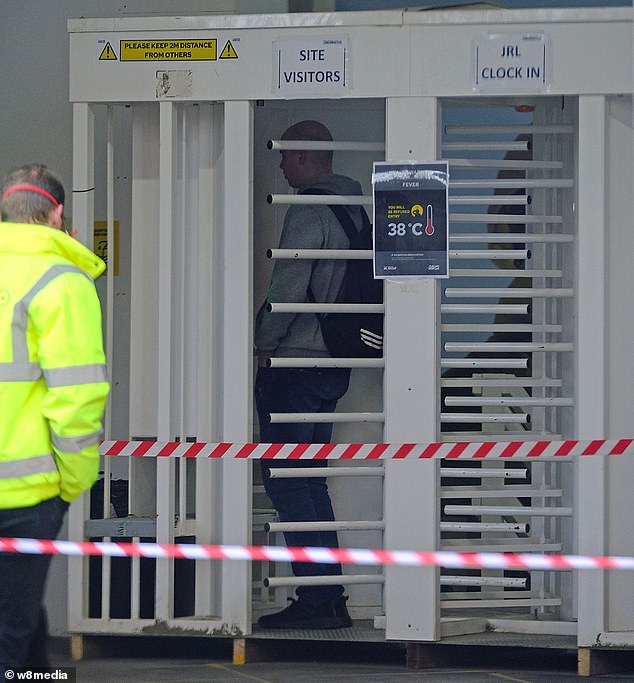 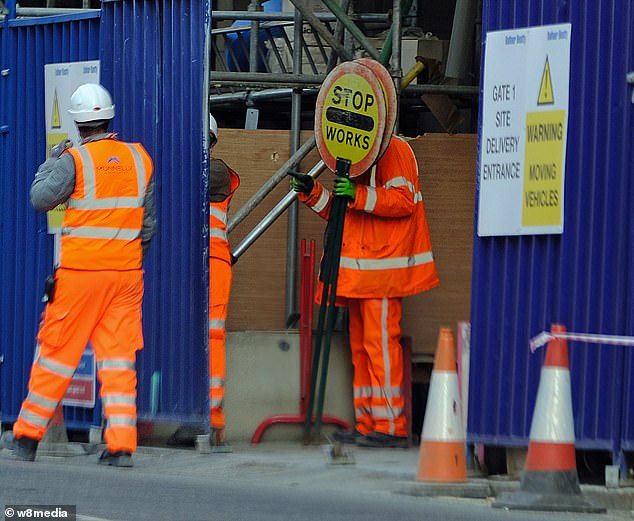 A witness told MailOnline: ‘There’s a really big block being built and they’re doing temperature checks on people before they enter the building site.

‘You can see they are clearly not social distancing. It’s almost like people have gone ‘oh look, we’re back to work, the disease has disappeared”.

‘I can only guess some of them have got on the Tube to get there which isn’t ideal. There were a few coffee shops open nearby, but all the chains were shut.’

The site at No. 1 Palace Street is operated by London-based infrastructure company Balfour Beatty, which has been contacted for comment by MailOnline this morning.

It comes as Taylor Wimpey said today that it plans to resume work on its construction sites from May 4. The housebuilder had ordered its sites, show homes and sales centres to be closed in March, as the coronavirus outbreak gathered pace. 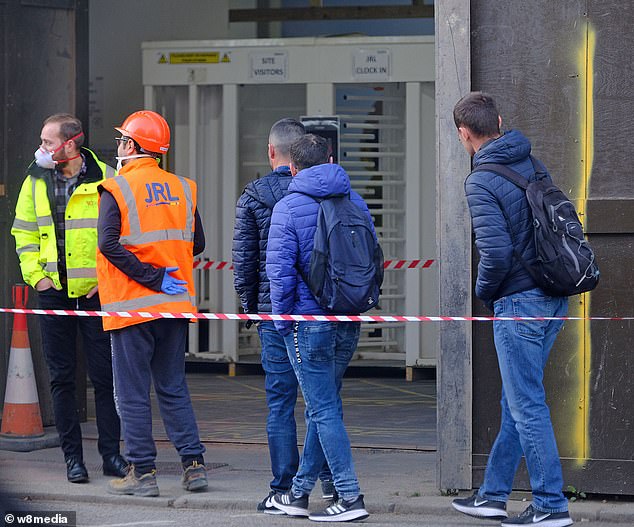 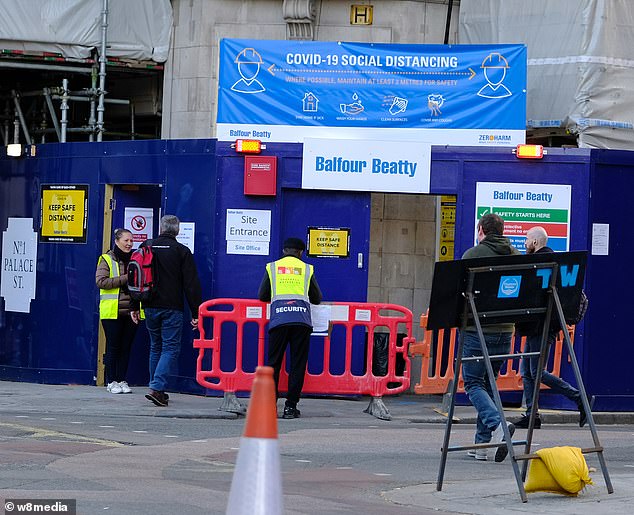 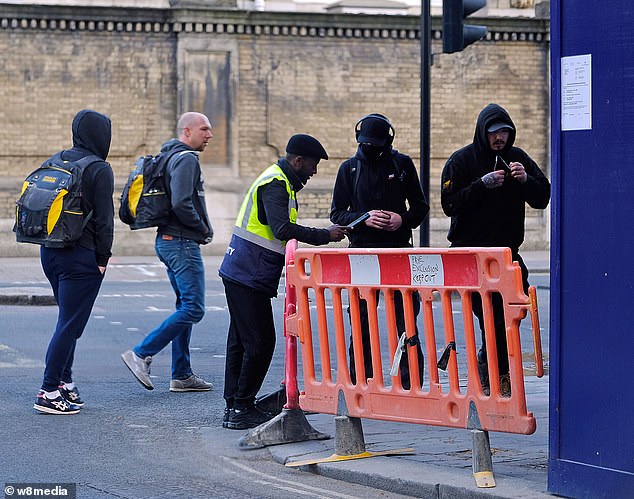 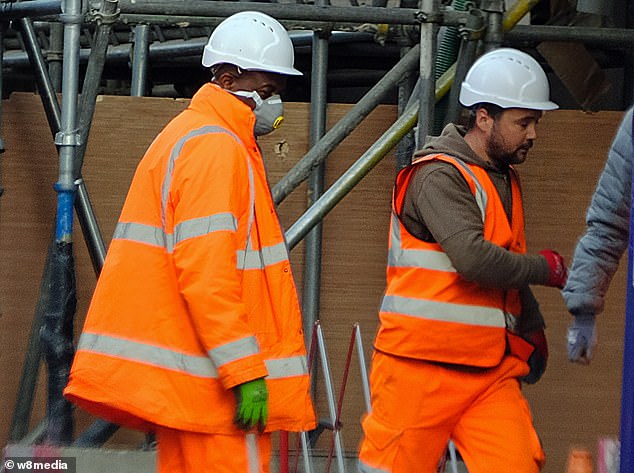 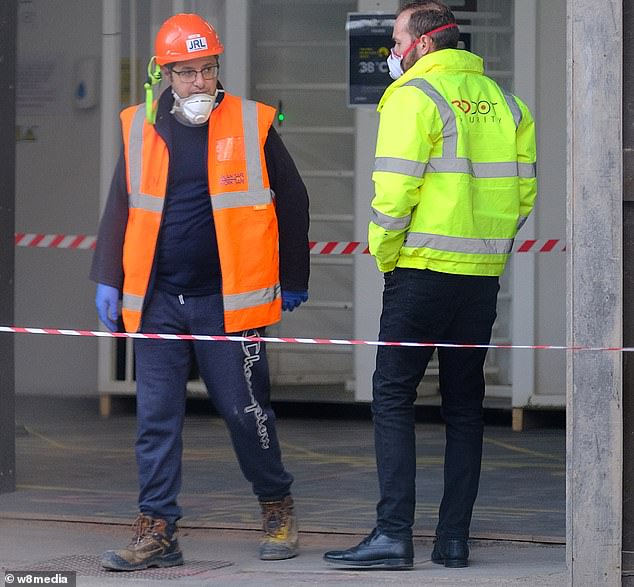 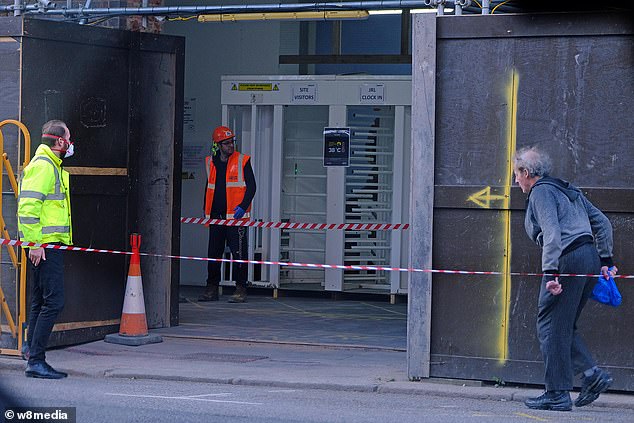 The company said it will re-start activity on most sites in England and Wales using ‘detailed new site operating protocols’ which comply with social distancing rules. 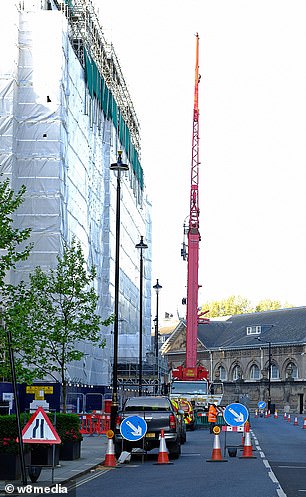 The construction site is on Palace Street, next to Buckingham Palace in London

Taylor Wimpey said trading has ‘inevitably been impacted’ by the virus, but demand has continued, with sales teams continuing remotely.

Elsewhere, rival Vistry Group said it will re-start work on 90 per cent of partnership sites and a ‘significant number’ of housing sites from the start of next week.

The company, which was recently renamed from Bovis Homes, also said it had received 80 cancellations and completed 193 private sales following the pandemic.

The company said it will take ‘learnings in terms of health and safety’ into account when it reopens its main car plant in Gaydon, Warwickshire, at a later date.

Both sites have been closed since March 25 due to the pandemic. The firm also announced that its senior leadership team have agreed to a reduction in pay.

Meanwhile Unite said the latest guidance being given to construction workers was unsafe and placed them at unnecessary risk.

The union said latest operating procedures were issued to coincide with a return to work at a large number of sites this week, particularly in the London area.

The guidance now states that where workers are required to work within two metres of each other, they should ‘work side by side, or facing away from each other, rather than face to face’, the union said.

When this is not possible and workers have to work ‘face to face’ within two metres of each other, workers should ‘keep this to 15 minutes or less where possible’.

Unite has written to Business Secretary Alok Sharma warning that workers’ lives were being endangered.

The union has also launched a hotline so that workers can report concerns and provide evidence of unsafe working practices.

Unite national officer Jerry Swain said: ‘Construction workers’ health is being threatened by watered down advice. Alok Sharma must step in immediately and have these defective procedures withdrawn.

‘We sincerely hope that this is not a case of the economy being put before the health of construction workers and their families.

‘Unite’s position remains unchanged – no site should be working unless it can do so safely and that means two-metre social distancing must be maintained at all times. 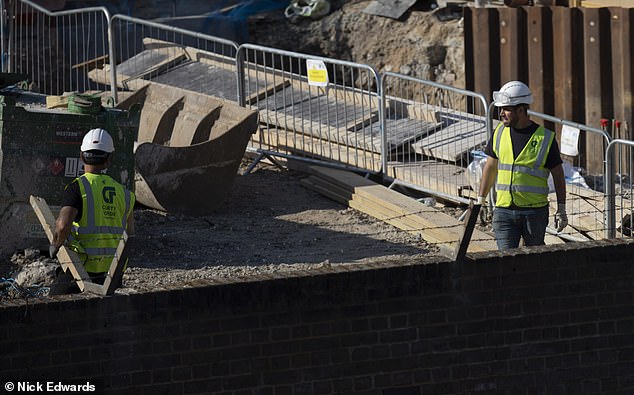 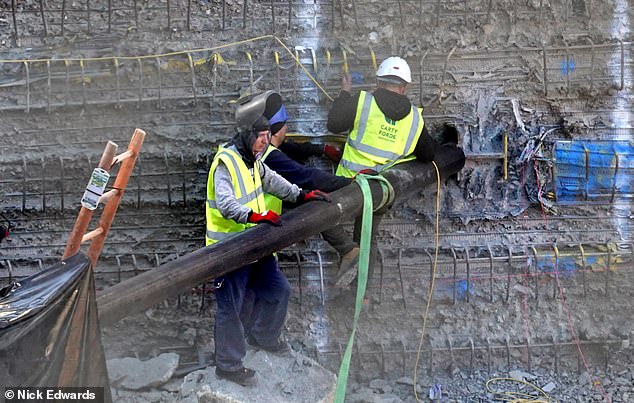 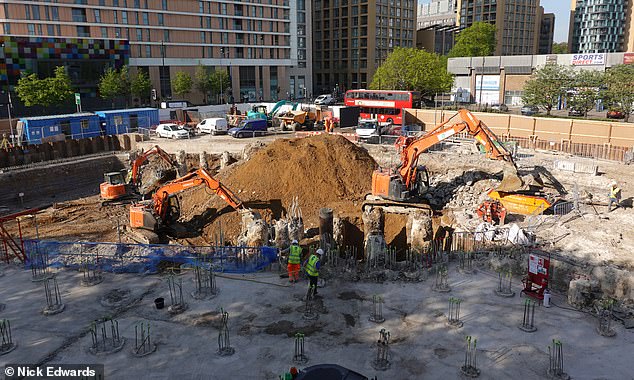 Diggers and workers are on the site in Lewisham, South East London, this morning 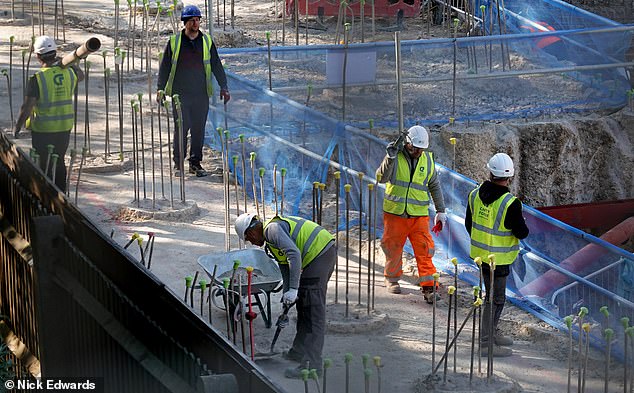 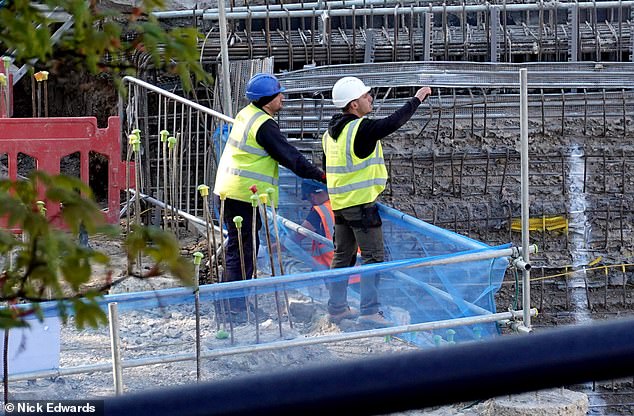 Builders are back to work on this construction site today in Lewisham, South East London 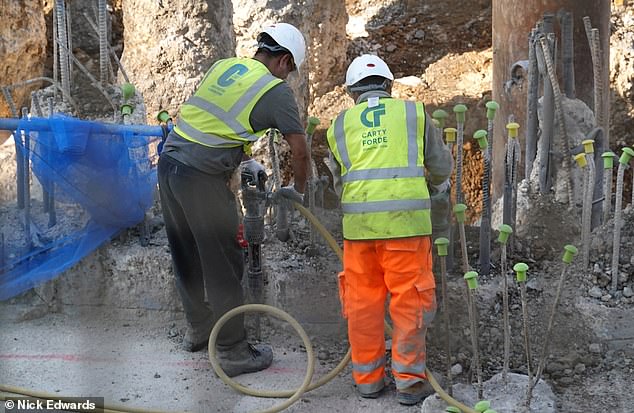 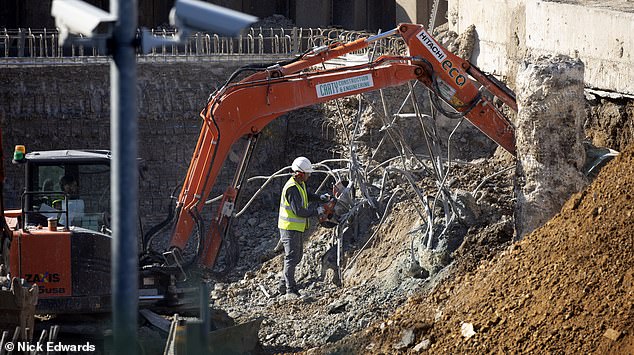 A construction worker in Lewisham, South East London, on the site next to a digger today

‘Contractors and clients also have a moral duty of care for workers from when they leave their home to when they return.

‘Construction workers should not be forced to use overcrowded public transport, potentially endangering their health and that of our key workers.

‘If our members believe their health is being directly compromised, they should stop work and seek the assistance of Unite.’

A campaign was launched weeks ago to stop building work on everything other than essential projects, such as those for the NHS.

A spokesman for the #shutthesites campaign said: ‘Even when safely social distancing, I am restricted by law from sitting on a park bench, chatting to a neighbour or visiting my family. 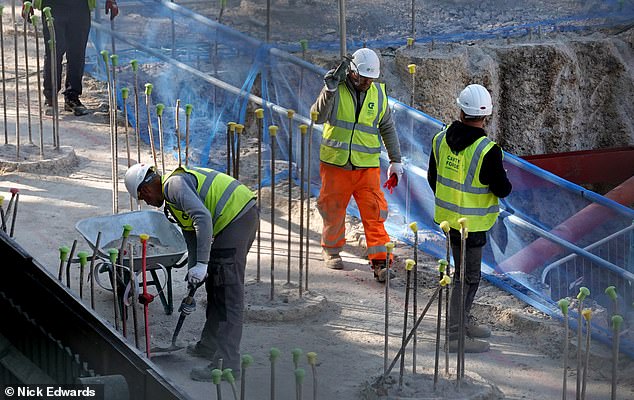 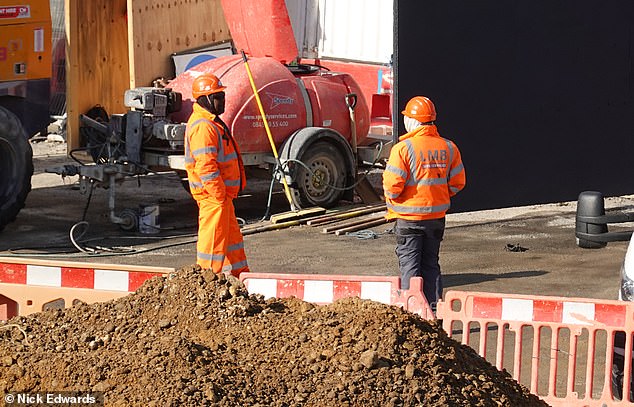 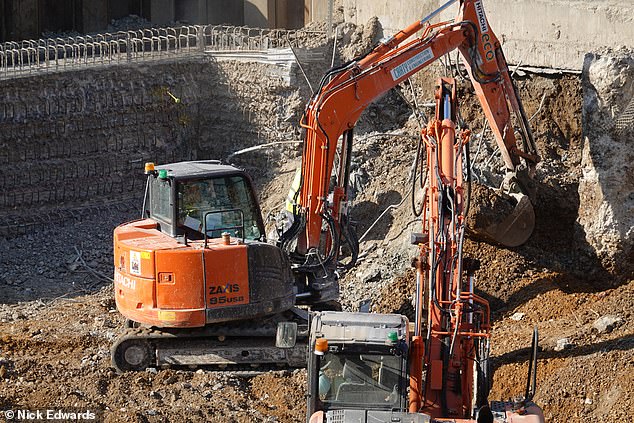 Diggers work on the site in Lewisham, South East London, as the lockdown continues 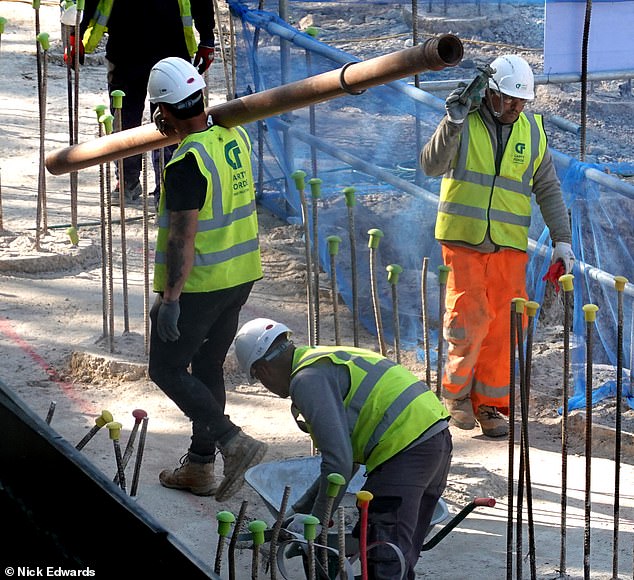 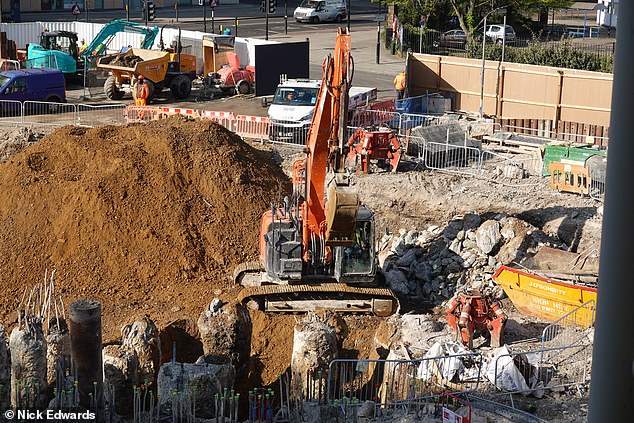 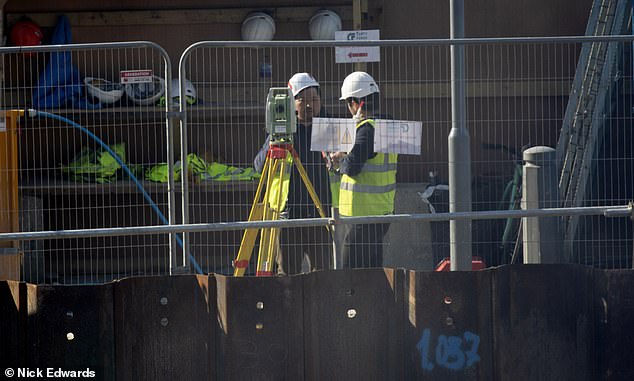 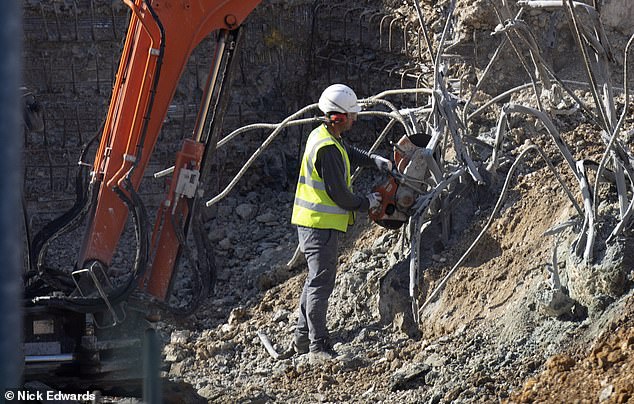 ‘Yet I can travel 40 miles into central London on public transport whilst mixing with genuine key workers to work hand in hand with other construction workers.

‘The priorities of this Government are economy over workers’ health and the new Construction Leadership Council Site Operating Procedures does not alleviate the worries of hundreds of thousands of construction workers on site today.’

A spokesman for the Blacklist Support Group added: ‘When construction workers go to work, they share minibuses, travel on packed Tubes, eat in crowded canteens, go up in full hoists, use palm print entry systems and live in barrack-style accommodation on site.

‘Construction is a dirty, dangerous place at the best of times with notoriously poor welfare facilities, where the very process requires people to work in close proximity. Coronavirus will spread like wildfire in these circumstances.’ 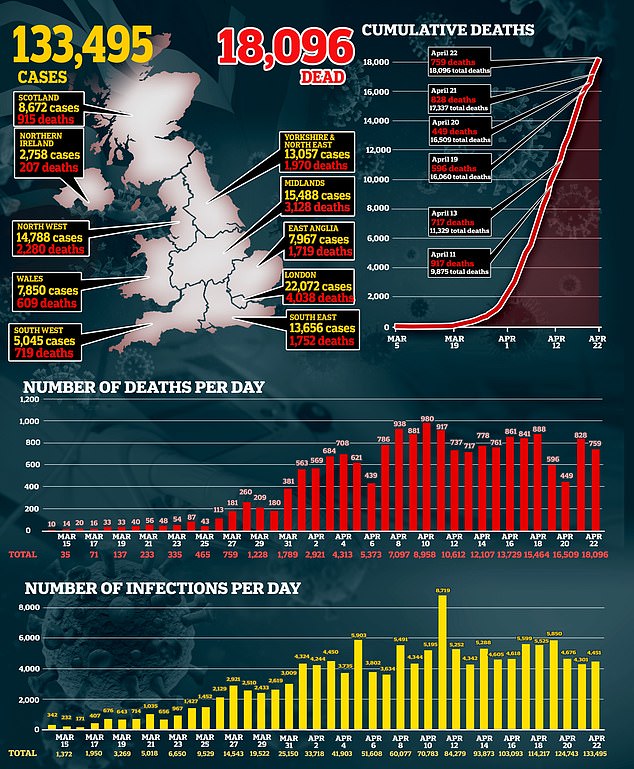 Yesterday, Health Secretary Matt Hancock said he was confident the country was at the peak of the disease, but stressed that continued social distancing was needed to bring the number of new cases down.

Those who do leave the house are told to keep a safe distance of two metres apart where they can.

All retailers selling non-essential items have been told to close, leaving only a small list of shops open, including supermarkets and newsagents.