Britain’s daily Covid cases jump by 13% in a week to 28,438 but deaths fall by almost a third to 26 – as ‘Professor Lockdown’ warns infections could still breach 100,000 a day in the coming weeks

Britain’s daily Covid cases are continuing to creep upwards but deaths have levelled off, official figures revealed today amid a warning from ‘Professor Lockdown’ that daily infections could still breach 100,000 a day.

Department of Health bosses posted 28,438 positive coronavirus tests, up 13 per cent in a week. Infections have now been ticking upwards for ten days.

And hospital admissions in England are still rising slowly, other data suggests. Another 689 Covid patients needed medical treatment on Saturday — up 9 per cent on the 630 the week before.

Meanwhile, today’s fatality count was nearly a third lower than last Monday’s with another 26 victims added to the Government’s official toll — compared to 37 last week.

Day-to-day counts can fluctuate heavily, especially on Mondays because of the weekend registration lag. But the overall trend — which lags weeks behind cases simply because of how long it takes between getting infected and becoming seriously ill — in deaths has been flat for over a week now. Hospitalisation numbers are affected before fatalities.

It comes after one of the Government’s scientific advisers claimed today’s loosening of ‘pingdemic’ isolation rules is unlikely to cause Covid cases to spiral because the public will remain careful.

Professor Stephen Reicher, a psychologist at the University of St Andrews and member of SAGE’s behavioural sub-committee, said he was a ‘relative optimist’ about the relaxation and the next phase of Britain’s coronavirus battle.

From today, millions of fully-jabbed people in England and Northern Ireland will not have to endure the misery of a 10-day isolation if they are ‘pinged’ by the NHS app or contacted by Test and Trace. It brings both nations in line with Scotland and Wales and marks one of the biggest steps on the road back to normality.

Asked about whether the move could spark a rise in infections, Professor Reicher told BBC Radio 4’s Today show: ‘After the reopening on July 19, many of us thought infections would go up massively to 50,000 or 100,000 a day. Perhaps they still will — but they didn’t.

But ‘Professor Lockdown’ Neil Ferguson, another one of No10’s Covid scientists whose modelling has influenced draconian measures, warned it was still ‘possible’ cases could hit 100,000 a day in the coming weeks.

There are fears that infections could start to spiral again now that isolation rules are being relaxed, the country is moving into the colder months and schools are preparing to go back.

The Imperial College London epidemiologist admitted he was not certain about what will happen to cases in the coming months, claiming: ‘I’ve learnt my lesson in terms of being over-eager at making those sorts of predictions.’

Professor Ferguson was heavily criticised for claiming it was ‘almost inevitable’ cases would rise above 100,000 — possibly as high as 200,000 — after Freedom Day in July. In reality, there are now just 28,000 cases every day, on average. 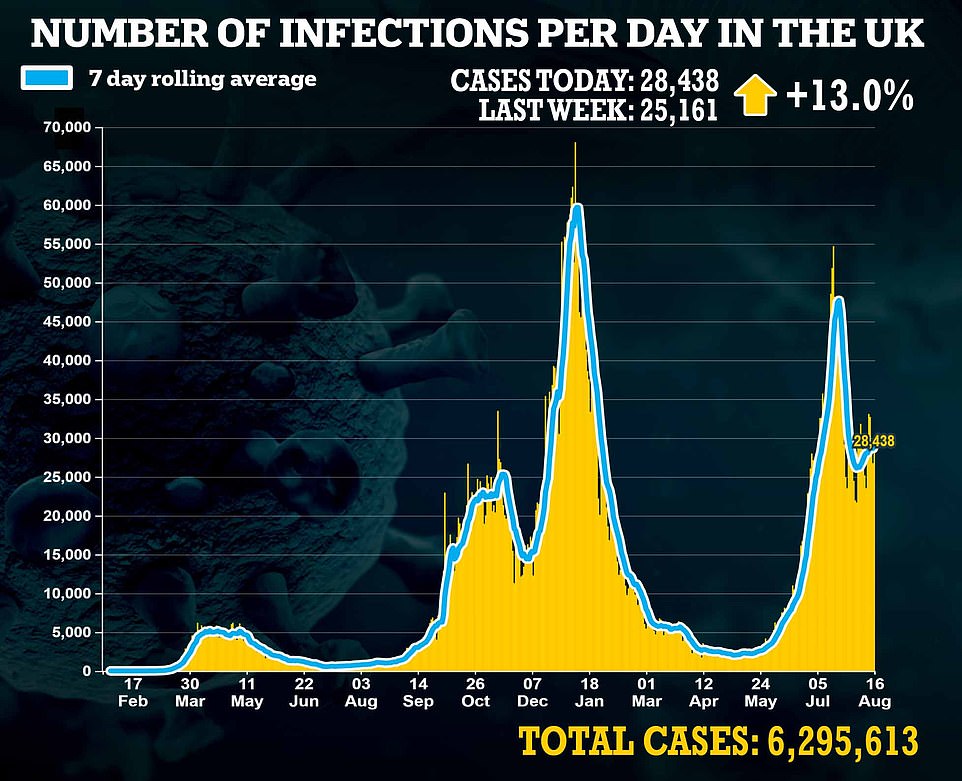 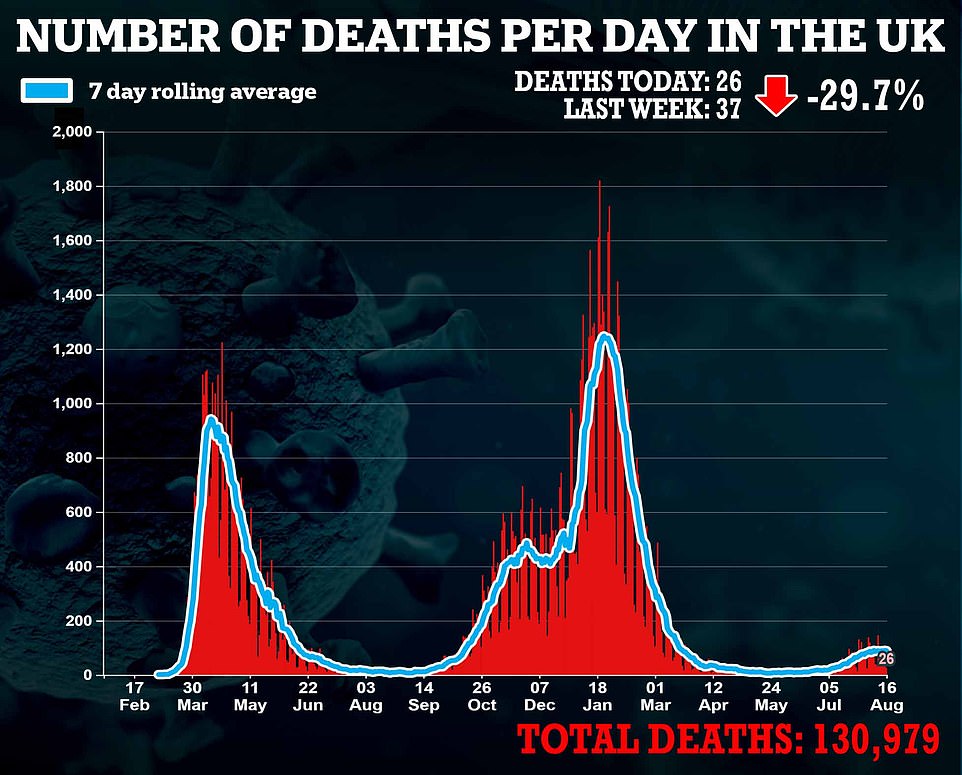 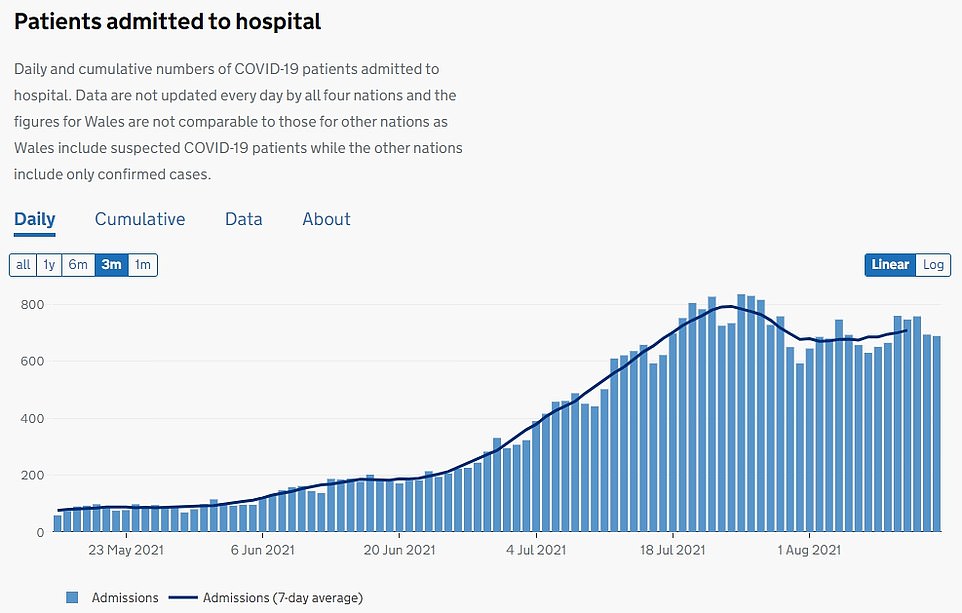 And hospital admissions in England are still rising slowly, other data suggests. Another 689 Covid patients needed medical treatment on Saturday — up 9 per cent on the 630 the week before 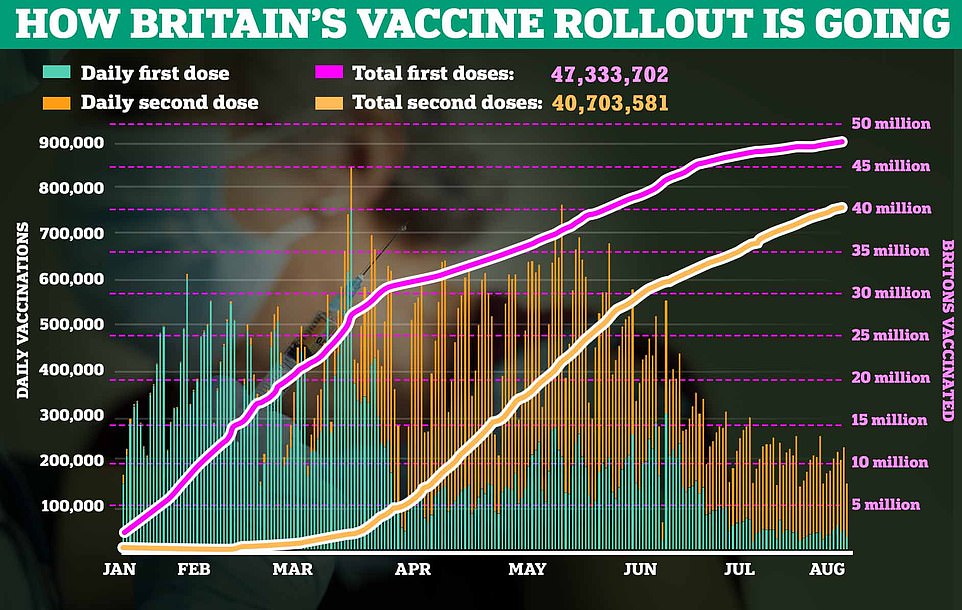 As of today, the double-jabbed and under-18s are no longer legally required to isolate for ten days if they come into close contact with someone who has Covid

Instead, they will be ‘advised’ by the NHS Covid-19 app to take a free PCR test

And if the PCR test comes back positive, they will have to quarantine at home for ten days

The SAGE modeller also warned of the potential of ‘quite a large wave’ in September and October when children return to school.

And he said hospital admissions of 1,000 a day, a fraction of levels seen during the darkest days of the pandemic, would ‘stress’ the fragile NHS, which already has ‘very long backlogs’.

However, he admitted ministers wouldn’t necessarily need a lockdown to stop the next wave. Professor Ferguson added: ‘What it will stop with is the acquisition of immunity in the population, so it will naturally decline and that’s the point where we start living with Covid where it becomes an endemic disease.’

Today’s rule change also applies to under-18s, who will no longer need to isolate if they are identified as a close contact of a Covid patient.

The Health Secretary said the successful vaccine rollout has allowed the Government to ease rules that have forced millions to quarantine at home, devastating businesses and schools.

Scientists, including Professor Reicher, have warned that, as the double-vaccinated can still catch and pass on Covid, today’s relaxation of the rules will inevitably lead to more infections.

But exactly how much of an effect this will have on the UK’s situation is still not known.

Professor Ferguson was asked whether it was possible daily cases could rise to six figures in the winter — after the modeller wrongly forecasted 100,000 infections every day this summer.

He told the Today programme: ‘It’s possible. It’s very hard to make those predictions at the minute. What we can be confident in is vaccination protecting people against the most severe disease.’

Asked what an ‘acceptable’ level of transmission would look like moving forward, the epidemiologist added: ‘We have a parallel with influenza pandemics, and we get them very episodically and we end up living with that virus as seasonal flu.

‘And so, I think we still could see quite substantial transmission in the autumn coming up to the winter but predicting further than that is very difficult.

‘We don’t know how much the virus will continue to change and evolve and that is probably the most important determinant of how much infection we get in the future. Of course, how much we can live with is a societal and political judgement as much as a medical one.’

Professor Reicher and others have warned that the Delta variant has ‘changed the equitation’ because of its ability to infect vaccinated people, who are also susceptible to spreading the virus — even though they are mostly immune from serious illness. 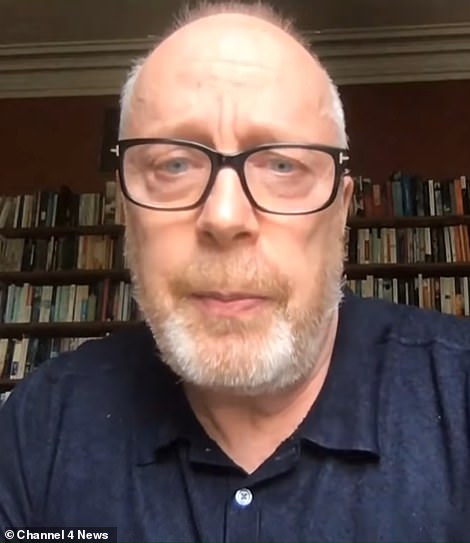 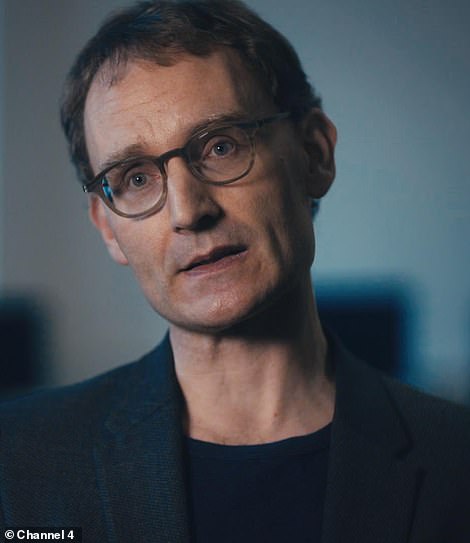 Professor Stephen Reicher (left), a psychologist at the University of St Andrews and member of SAGE’s bevaioural sub-committee, said he was a ‘relative optimist’ about the relaxation and the next phase of Britain’s coronavirus battle. But ‘Professor Lockdown’ Neil Ferguson, another one of No10’s Covid scientists whose modelling has influenced draconian measures, warned it was still ‘possible’ cases could hit 100,000 a day this winter. 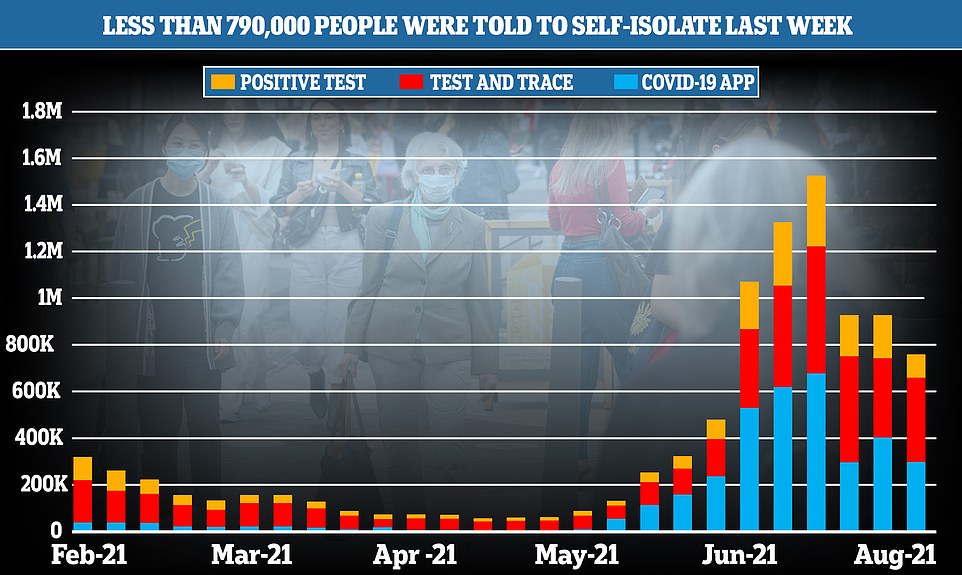 At the worst of the ‘pingdemic’, more than 1.5million people were isolating per week. That number has come down to more than 700,000 in recent weeks

Covid and flu vaccines will be mixed into one injection to save time and make future booster programmes more convenient at one of the UK’s mega vaccine factories.

Dr Matthew Duchars, chief executive officer of the Vaccine Manufacturing and Innovation Centre (VMIC), claimed the facility in Oxfordshire is looking into whether a single jab can be used to immunise against both viruses.

Minister have not yet confirmed booster jabs will be given this autumn, with No10 waiting on advice from its expert panel before pressing ahead with plans.

But Health Secretary Sajid Javid said last week that the UK ‘will be able to start the booster programme’ from next month, if the Government is given the green light.

Up to 32million over-50s could be invited for top-up jabs, which may be dished out at the same time as the annual flu vaccine.

Whitehall sources said the plan this autumn is to administer Covid and flu jabs at the same time in different arms.

But Dr Duchars told the Telegraph that the VMIC was looking at combining the two for future roll-outs.

He said: ‘It will save a lot of time and it would be a lot more convenient to just give one shot, so it is something that we and vaccine developers and producers will be looking at.

‘Let’s say we do need to give a seasonal vaccine, and people need one shot for flu, and one shot for Covid and another for something else.

‘If you can put them all into one, then that’s obviously preferable.’

Professor Reicher added: ‘Vaccines are wonderful and if you read the government website about the changes in the rules, it’s like a hymn of praise to the vaccine.

‘And we should indeed be grateful – but they’re not perfect and you’re not invulnerable if you’re double-vaccinated, there’s still a fairly good chance you could get infected and infect others.

‘Whereas, previously, there was a one in ten chance if you were infected you’d be hospitalised. It went down to about 2 per cent but it has recently risen a bit to about 3 per cent.

‘But there’s still a danger of hospitalisation, so if enough people get infected it can still be serious. So the first message you need to give people is: be careful, infections matter.’

While Professor Reicher said he had faith that the British public would remain diligent, he admitted he would have preferred if fully-jabbed people were still required to take a PCR test if they are pinged.

Currently, Government advice is for inoculated patients to book a swab if they are identified as a close contact but the recommendation is not legally binding.

Professor Reicher added: ‘While it’s true that you don’t have to self-isolate, the other side of the equation is still there is very strong advice to get a PCR test to find out whether you’re infected or not, and I think that’s really important to stress because I think one of the issues here is clear messaging about what you should do.

‘That is a problem. But at the same time, it’s important in terms of the messaging that the public understands that it is strong advice. I wish it was stronger, I wish there was a requirement to get a PCR test. But at least there’s strong advice and let’s not forget that.’

The NHS app was launched in September last year and it tells users if their smartphones have been near someone who has tested positive for Covid. But as lockdown eased and the Delta variant spread, the app led to the chaos that was dubbed the pingdemic.

In the week to July 21, a record 689,313 people in England and Wales were told to isolate. The pingdemic caused such huge staff shortages – leading to empty shop shelves and cancelled trains – that the Government had to exempt key workers from the rules, including those in the food industry and working on public transport.

Under huge pressure, ministers then announced that the legal requirement to isolate would be removed for under-18s and adults who have had both doses of the Covid vaccine.

From today, double-jabbed app users identified as close contacts of someone with Covid will be advised to take a free NHS PCR test – and they must isolate if that comes back positive.

Hannah Essex, of the British Chambers of Commerce, said many businesses will be ‘relieved’ about the change to the rules.

But Dr Louise Soanes, of the charity Teenage Cancer Trust, said vulnerable youngsters are ‘at greater risk of serious illness if they get the virus’ and those who are double-vaccinated should still take precautions if they are pinged.