Brave mother fought off convicted paedophile after he grabbed her by the throat and swung a knife at her demanding her car keys seconds after she’d put her daughter, 7, into the back seat as judge jails him for six years

A brave mother fought off a convicted paedophile after he grabbed her by the throat and swung a knife at her demanding her car keys seconds after she had put her daughter, seven, into the back seat as a judge jails him for six years.

Duncan Johnson, 41, demanded Natalie Grimes’ handbag and keys at an Asda car park in Liverpool, just after she put her seven-year-old daughter into the vehicle.

The sex offender grabbed Ms Grimes by the throat, then held a blade over her head as she tried to fight him off.

He said ‘I will f***ing kill you’, and brought it down just as Ms Grimes’ raised an arm to protect herself, slashing her coat. 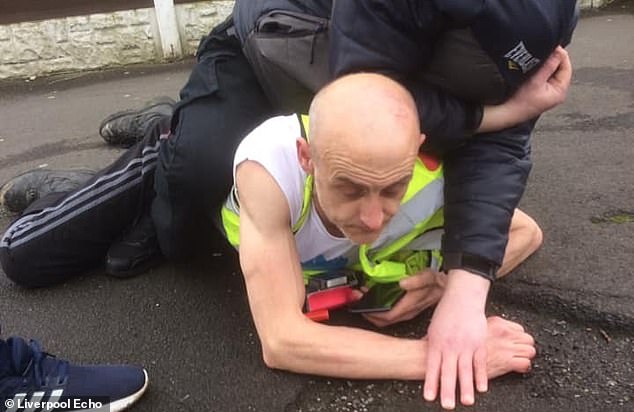 Duncan Johnson, pictured being apprehended by a member of the public, 41, swung a knife at a young mother in an Asda car park as he tried to rob her car with her daughter, 7, inside

Fearing he would abduct her screaming child, the mother wouldn’t let Johnson have the keys, and the drugged-up man fled.

He was chased by two men who had seen the weapon and they wrestled him to the ground, holding him until he was arrested.

Johnson has 30 past convictions for 128 offences and was on licence – having been released after abusing a girl in a wood.

He complained that when the witnesses caught him, they allegedly beat him up and he was hit with a bar.

But Judge Louise Brandon praised the men for ‘bravely’ pursuing and detaining him, as she jailed the ‘dangerous’ menace.

Liverpool Crown Court heard he struck at the Asda store off Utting Avenue in Walton, at around 11.30am on Sunday, March 15.

Ms Grimes was unloading her shopping from a trolley when Johnson said: ‘Give me your f***ing bag and f***ing keys.’

Iain Criddle, prosecuting, said: ‘He then took hold of her by the throat and she said he tried to strangle her.’

She tried to push him away, before he made the death threat and slashed her coat, during what Ms Grimes perceived as a two-minute ordeal.

Mr Criddle said it was much shorter, but added: ‘I suspect for the person who was suffering this attack, it will have seemed like a lifetime.’ 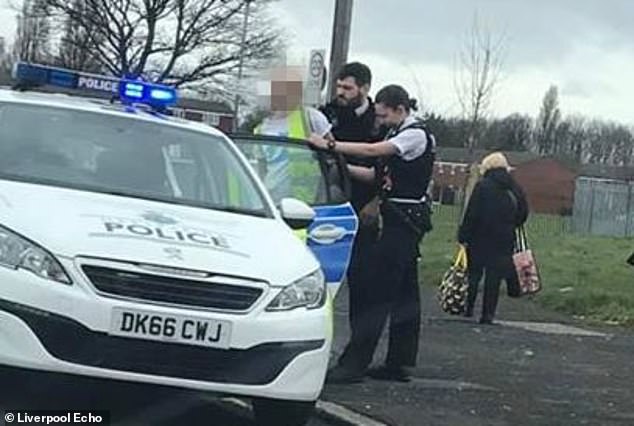 Police pictured at the scene in the Asda car park on Abingdon Road in Walton, Liverpool, after the incident which happened on Sunday March 15 at around 11.30am

CCTV footage showed how Johnson had walked up and down, before spotting and pouncing on his vulnerable target.

When interviewed, Johnson, Northwood, Kirkby, claimed he was chased for no reason and had been threatened, so tried to hide.

He was picked out in an identity parade but again lied to police, before finally admitting attempted robbery and possession of an offensive weapon.

Johnson’s criminal record started with an arson in 1991 when he was a youth and he was convicted of possessing an offensive weapon in 1995.

He was jailed for nine years for robbery in 2008 after he and others stormed a 65-year-old man’s home, stabbed him in the neck with a knife, and stole £1,600.

Johnson was locked up for six years in 2015 for causing or inciting a girl to engage in sexual activity and causing a child to watch a sexual act.

Neil Gunn, defending, said Johnson had spared his latest victim the ‘trauma’ of having to relive the incident at a trial by pleading guilty.

He said he had a ‘difficult upbringing’ and gave evidence himself at a trial in 2010, because he was ‘a victim of matters that go back to his very early childhood’.

Mr Gunn said the man responsible was convicted and jailed for life, and that the crimes may have impacted on his client’s offending.

He said Johnson did not trust the Probation Service and disputed stabbing the victim of his 2008 robbery or that two young boys were also involved in his sex crimes, as suggested in a summary of the offence. 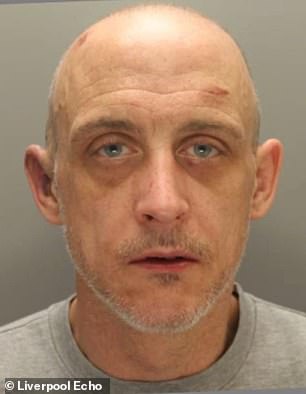 Johnson, above, was jailed for six years with an extended three years on his licence

Mr Gunn submitted the robbery of Ms Grimes was ‘spur of the moment’, not premeditated, as it was a ‘packed car park’, not a remote setting.

Referring to the citizen’s arrest, he said: ‘It’s right to say he was beaten with a bar and his wallet was taken – that was shown on the footage.

‘He’s entitled to and wishes to make a complaint of assault in respect of the manner in which he was detained, but he doesn’t seek any particular sympathy.

‘It’s right to say there was perhaps some summary justice meted out at the time of his detention.

‘By the time he arrived at the police station the duty nurse suspected he might have a fracture to his skull and he was sent to the Royal for a CT scan. Fortunately for him and everyone else involved, that was not the case.’

Mr Gunn said his client was a welder by trade, but at the time had been living in his brother’s garden in a tent, because the parents of the girl he abused had discovered his previous address, and it wasn’t safe for him to live in the area.

Judge Brandon said Johnson threatened to kill Ms Grimes before swinging the knife at her, in what she described as ‘the worst experience of my life’.

The judge said: ‘She was worried you were going to drive away with her daughter.’

Judge Brandon said there was no doubt both the mum and child suffered ‘considerable emotional distress’ and the daughter was left ‘traumatised’.

She said: ‘That little girl must have been terrified, as was her mother, who did all that she could to stop you taking that car with her child in it.

‘She was incredibly brave.’

The judge added: ‘Her bravery is in stark contrast to your disgraceful and shocking conduct that day.’

She concluded it was premeditated and said Johnson had shown no remorse, telling him: ‘You appear to blame everybody but yourself for matters that are entirely of your own making.’

Judge Brandon jailed him for six years, with an extended three years on licence.

Johnson will serve at least four years behind bars before he is eligible for parole.