We will scrap one-metre social distancing rule on July 19: Boris Johnson vows to end Covid measure to save arts and hospitality

Boris Johnson is determined to scrap the one-metre rule on July 19 even if other Covid measures have to stay in place, Cabinet sources said yesterday.

Multiple sources have told the Daily Mail that the Prime Minister has prioritised the removal of the key social distancing rule above all other measures because of its importance to sectors such as hospitality and the arts.

A surge in Covid cases has raised fresh doubts about the Government’s ambition to end all restrictions on July 19.

It has also all but ended hopes that Freedom Day could come a fortnight early on July 5. 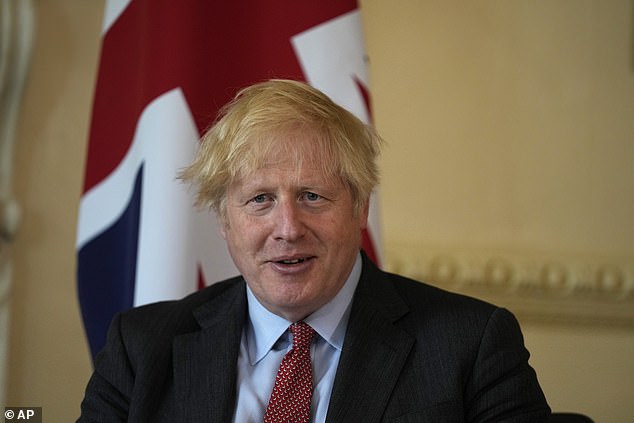 Boris Johnson is determined to scrap the one-metre rule on July 19 even if other Covid measures have to stay in place, Cabinet sources said yesterday

Ministers will formally assess the latest data this weekend before announcing a decision on ‘the mid-point review’.

But a Cabinet source told the Mail: ‘It’s not happening.’

The Government’s roadmap out of lockdown had originally envisaged lifting all remaining restrictions by June 21.

But the final stage of the plan – known as Step Four – was postponed earlier this month because of the rapid spread of the Indian or Delta variant across England.

Mr Johnson remains hopeful that all restrictions will finally go on July 19. But officials are now drawing up contingency plans in case only a partial lifting is possible on that date. 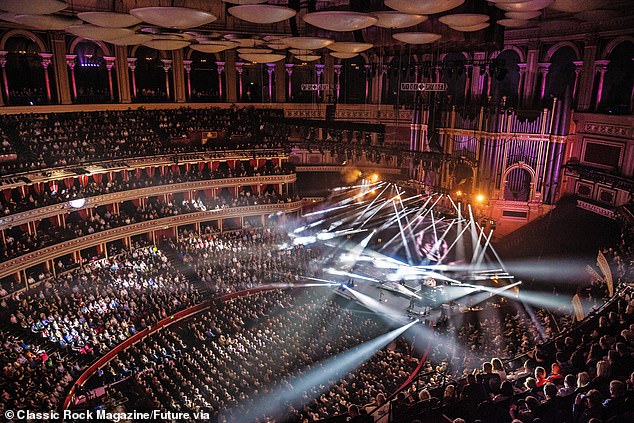 A surge in Covid cases has raised fresh doubts about the Government’s ambition to end all restrictions on July 19, but it is understood the Prime Minister will ease social distancing measures to help the arts and hospitality industries get back on their feet 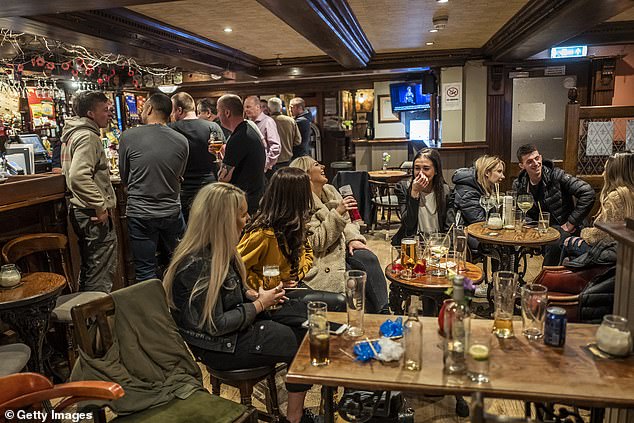 Ministers have been alarmed by the continuing surge in cases driven by the virulent new variant.

The latest official figures yesterday showed 16,703 new cases were recorded in 24 hours – the highest number since early February. Cases are now rising at almost 45 per cent a week.

Hospitalisations and deaths, which are now seen as the key figures, both remain low.

And figures show that the virus is ‘running out of steam’ in hotspots of the Delta variant – with the R rate now at its lowest since the ‘third wave’ began. 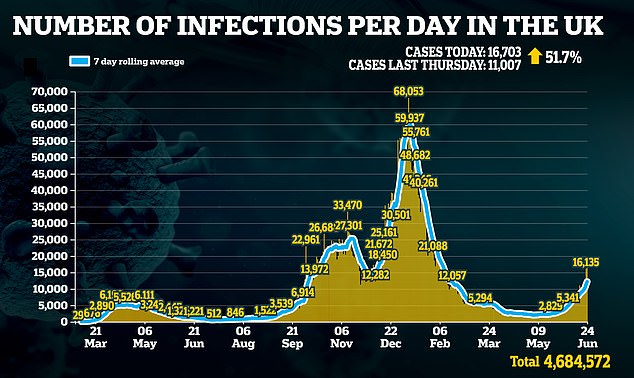 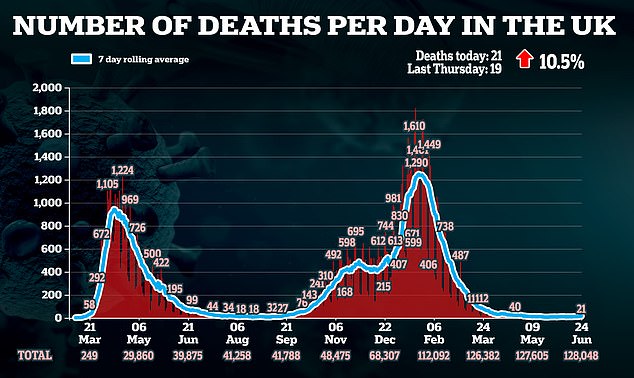 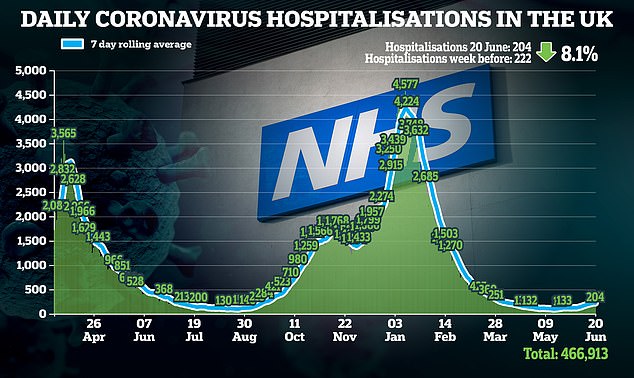 Chancellor Rishi Sunak said he expects to ditch his mask ‘as soon as possible’ once it is no longer legally required in England.

Environment Secretary George Eustice said he would follow suit as soon as the ‘legal compulsion’ was dropped.

‘I have to be honest, once I’m told that it’s safe not to, I want to get back to normal,’ he said.

Mr Eustice said the Government planned to lift ‘all’ restrictions on July 19, including the laws compelling people to wear masks on public transport and in shops.

He added: ‘Whether there will still be some people who might choose to wear masks or whether it may be advisory in some settings, that’s a separate matter.’ But Downing Street played down expectations, with the Prime Minister’s official spokesman insisting ‘no decisions’ had been taken on the issue.

Government sources said it was possible that face coverings might still be required or advised in certain settings, such as on public transport.

Pressed on whether Mr Johnson hoped to stop wearing a face mask at the end of the road map, his spokesman said: ‘That would depend.

‘The Prime Minister, should there be any requirement for it in future, would be happy to comply with them.

‘But, as I say, no decisions have been taken on what will or will not be required in future.’

In the North West of England and parts of Scotland virus rates are ‘continuing to plateau’.

Nevertheless, some ministers are getting jittery about the prospect of sanctioning a full reopening against the backdrop of rising cases, which officials fear could hit 30,000 a day within a fortnight.

Chancellor Rishi Sunak has urged the Prime Minister to prioritise the removal of the one-metre rule, which continues to cripple the hospitality and arts sector by reducing the capacity in venues to unsustainable levels.

Scrapping the rule is also seen as essential in any drive to persuade office workers to go back to their desks.

A Cabinet source said the PM had accepted the argument that the one-metre rule should be made the top priority for July 19.

‘The economic case is unarguable,’ the source said. ‘The one-metre rule is the key remaining social distancing measure left.

‘If we can’t remove it then we might as well not bother on July 19 at all. The PM is determined to get rid of it, even if things like masks have to stay for a bit longer.’

Guidance on working from home could also remain in place until the autumn, despite both the PM and Chancellor wanting it lifted.

Mr Sunak yesterday struck an upbeat tone about the future, saying: ‘Things are looking good for July 19, as the Prime Minister has said. My strong expectation is we can lift these major restrictions then and get back to normal.’

But No 10 said it was too early to say whether measures like face masks would remain in place after July 19.

Downing Street said ‘no final decisions’ had been made on whether all coronavirus restrictions would be legally lifted on July 19, despite Environment Secretary George Eustice declaring all measures would be scrapped.

The Prime Minister’s official spokesman told reporters: ‘It is right that obviously we want to get back to as close to normal as is possible post-Step Four.

‘However, no final decisions have been taken about what measures are required.’ 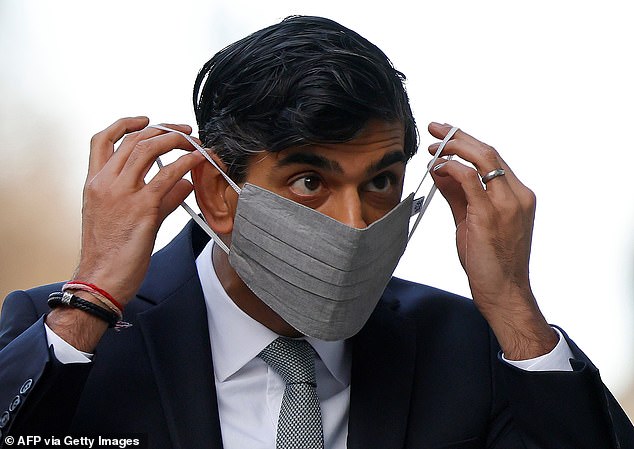 Chancellor Rishi Sunak has urged the Prime Minister to prioritise the removal of the one-metre rule, which continues to cripple the hospitality and arts sector by reducing the capacity in venues to unsustainable levels