A big-cat lover’s two lions and a puma face an uncertain future as planning bosses decide whether to allow him to keep them in a 12-foot-high enclosure.

The former show-jumper was originally granted planning permission for the use of the enclosure as a home for big cats. But the land registry has since revealed the land doesn’t belong to Reece.

His case has been hauled back to the planning committee and a decision will be made tomorrow.

Several months after he rescued the cubs Reece applied for retrospective planning permission for the 4306-square-foot enclosure at his home in Strelley, Nottinghamshire. 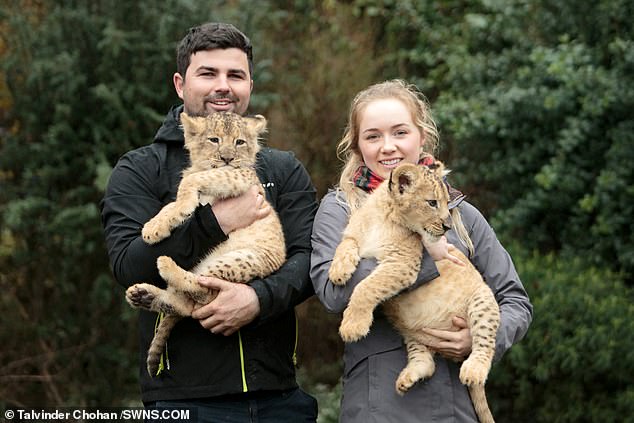 The enclosure is now home to both lions and a Canadian puma called Rogue.

At the time of the first application some 14 neighbours complained the enclosure was too close to a bridleway and would be ‘unsafe’ as a home for big cats at just 147 feet from the nearest house.

Despite this, permission was granted on the understanding all parties would work on a legal document – called a unilateral undertaking – over the future of the cats.

The agreement made Reece promise only to use the enclosure for the three cats he currently had, and to get rid of it when they died or moved. 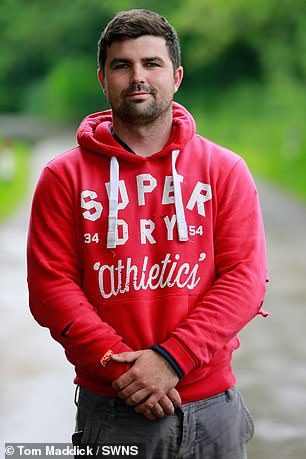 But when it was submitted earlier this year, Land Registry showed the owner of the land was not Reece.

Reece lives in the nearby barn conversion with his parents; Karen, who owns a string of children’s nurseries and his heating engineer father Gary. His girlfriend Annie and his grandparents also live there.

The family have two squirrel monkeys called Ronnie and Reggie.

Last year he was asked to apply for retrospective planning permission to change the use of the land to allow for big cats.

At the time, Reece, who is licenced to keep wild animals, said he didn’t realise he needed to apply to the council for planning permission.

The permission was granted by Browtowe Borough Council in June 2019.

Planners who visited the enclosure in January this year – following up on ‘reports of unlawful development’ – found the enclosure was ‘material different’ from the originally design.

A report into the enclosure said there were worries over ‘enforceability issues’ since the land and cats were owned by different people.

It added: ‘Members will be aware that the decision made on 26 June 2019 was made on the understanding that the applicant owned the land as well as the cats.’

It also said a site visit in January revealed ‘a number of inconsistencies with the plans of the puma enclosure’. 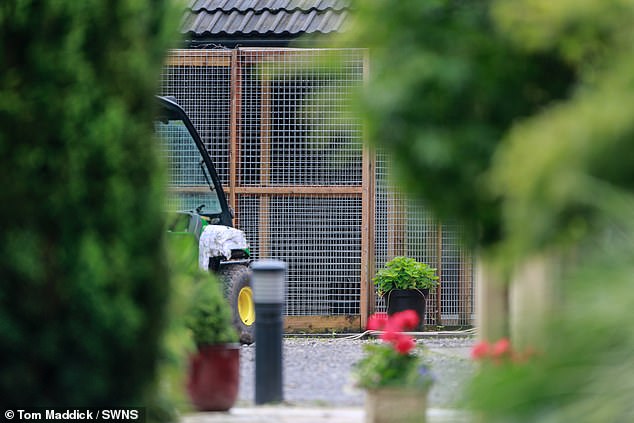 Several months after he rescued the cubs Reece applied for retrospective planning permission for the 4306-square-foot enclosure at his home in Strelley, Nottinghamshire. Pictured, enclosures can be seen from the lane near Reece’s home

The changes were found to be so significant a new planning application would have to be made.

It added: ‘These additions constitute a material change to the scheme originally considered and therefore an amended planning application would be required to legitimise the enclosure.

‘However, this does not affect the ability of the Council to grant planning permission for the enclosure as originally proposed.’ 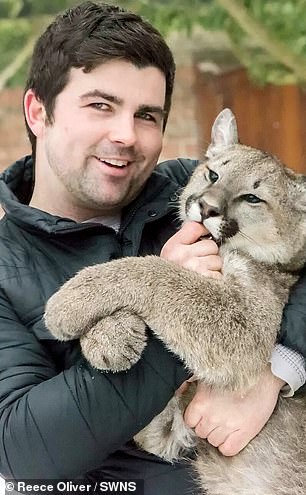 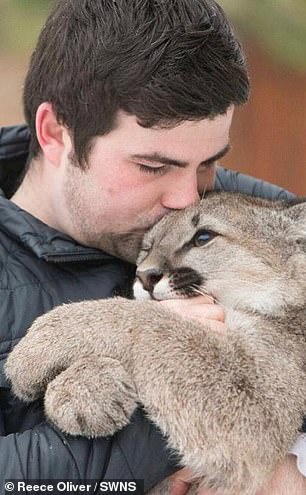 Reece lives in the nearby barn conversion with his parents; Karen, who owns a string of children’s nurseries and his heating engineer father Gary. His girlfriend Annie and his grandparents also live there. Pictured with his puma Rogue

Planning bosses will only be considering the unilateral agreement issues – not the alleged changes to the enclosure – when they make a decision tomorrow.

Speaking when he was granted permission last year, Reece said: ‘It’s the best feeling in the world. It’s the best result ever.

‘It’s aged me though. These last few weeks have been extremely stressful, but I know those animals would have had to have been put down.’

It was previously reported that details around the lions’ rescue were unclear.

On his Just Giving fundraising webpage, where he asked for donations to help feed the cats, Reece first claimed the cubs’ mother had died.

He later said they were not siblings and could be mated. 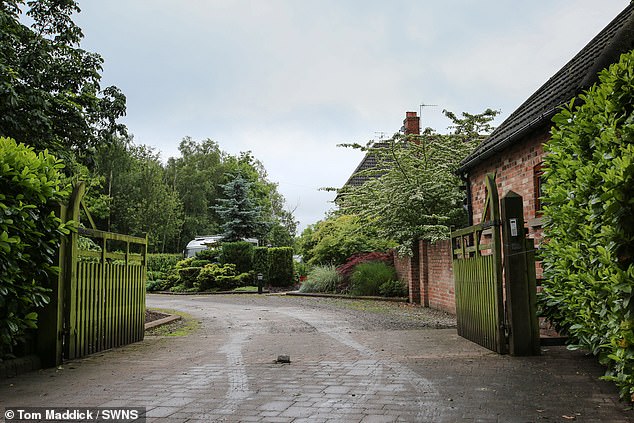 Animal charities have also questioned his insistence that he was rescuing the lions to stop them being put down.

Wild animal welfare charity Born Free Foundation said the animals would not have been killed if he’d surrendered them to its care. Instead, they would have been sent to a sanctuary in South Africa.

Reece denied paying for the animals beyond the costs of driving to collect them from the Czech Republic in a quarantine van used to transport his horses.

He has previously worked with big cats in Germany and has a European Zoo Keeper’s Licence.

Reece said he was told the cubs needed help by ‘a colleague’ from the network of UK private keepers he keeps in contact with through Facebook. 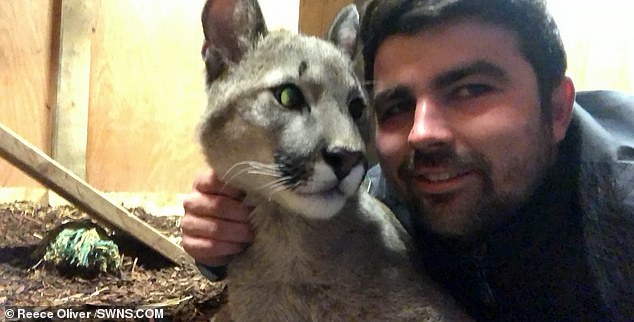 Reece with his puma Rogue. He has previously claimed he rescued the animals because there is ‘no where for them to go that’s safer’

All insist their actions benefit animals and that their exotic pets are no threat to anyone.

‘I know one guy who has two bears, cheetahs, clouded leopards and everything,’ Reece said. ‘He has just built a bear enclosure that cost him £150,000. The top private keepers keep the animals better than zoos, where it’s quantity over quality.

‘For me, this is about conservation. There’s nowhere for them to go that’s safer. I love these animals like they were my own children. I would have made their enclosure bigger if I could, but I always have the authorities to answer to.’