As the nation’s football fans try to work out how England failed to beat the USA, conspiracy theorists have pointed to the stadium’s air conditioning system being switched off a full hour before kickoff.

As a result, conditions felt noticeably warmer during the game on Friday night than they did during England’s daytime, 6-2 victory over Iran.

While there is no suggestion that an official complaint is to be made, some of manager Gareth Southgate’s squad remarked about how warm it had felt during the game.

But last night, FIFA denied there had been an ‘aircon-spiracy’. 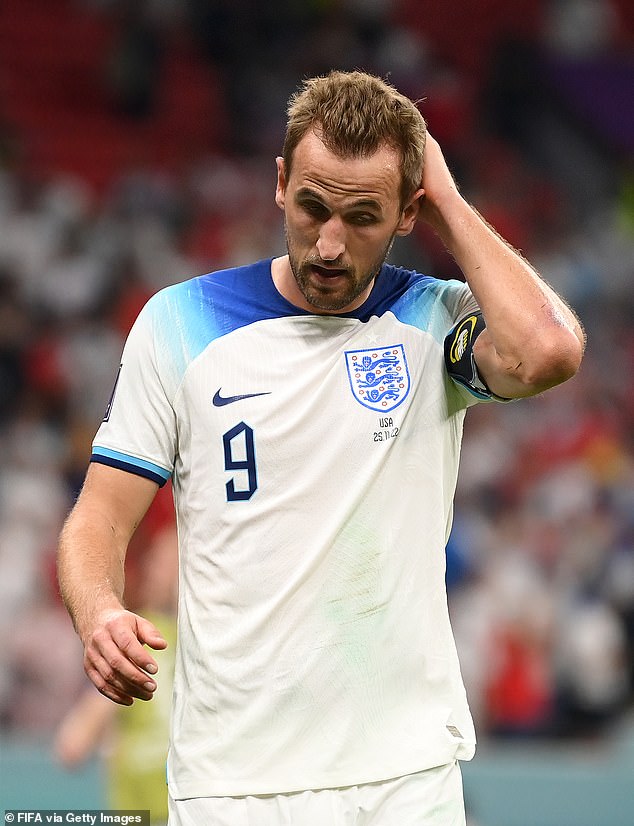 The air conditioning at the Al Bayt Stadium was switched off an hour before England’s 10pm local time kick-off against the USA at the request of the FIFA-supplied operations manager. Pictured: England captain Harry Kane after the 0-0 draw against the US

The seven tournament stadiums in Qatar are fitted with state-of-the-art climate control units designed to combat the desert heat by keeping temperatures down to around 24C.

But the MoS has learned that the air conditioning at the Al Bayt Stadium was switched off an hour before England’s 10pm local time kick-off against the USA at the request of the FIFA-supplied operations manager.

Officials in Qatar are clearly still grappling with temperature issues in stadiums after fans earlier in the week complained that the air conditioning in the Al Bayt stadium had left them feeling cold.

German WAG Christina Ginter, who is married to Matthias Ginter, posted a photo of goosebumps on her arm during her husband’s team’s 2-1 loss to Japan.

The tournament was shifted from its normal June and July dates over health concerns about playing in the Middle East heat.

But, as Three Lions’ skipper Harry Kane, right, trudged off the pitch, scratching his head after the surprise 0-0 draw, there is no doubt England are certainly feeling the