Washington: A day after President Donald Trump accused the US military brass of wanting to fight wars to keep weapons makers happy, the Army's top general said on Tuesday leaders of the armed forces would recommend sending troops into combat only when it is in American national security interests or as a last resort.

Asked about Trump's Monday criticism of Pentagon leaders, US Army Chief of Staff General James McConville declined to comment directly on it, saying the military should remain out of politics, especially close to an election. 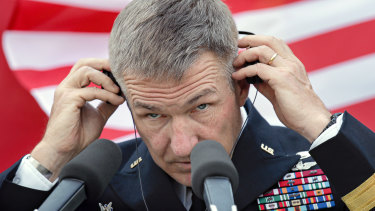 We take this very seriously: US General James C. McConville,Credit:AP

"I can assure the American people that the senior leaders would only recommend sending our troops to combat when it is required in national security and in the last resort. We take this very, very seriously in how we make our recommendations," McConville added.

Trump has increasingly clashed with Pentagon leaders over a range of issues after initially giving retired generals senior positions in his administration.

At a White House news conference on Monday, Trump criticised Biden, describing him as a proponent of "endless wars," before turning his criticism toward military leaders who he himself appointed, saying they are interested in conflict to satisfy military contractors. 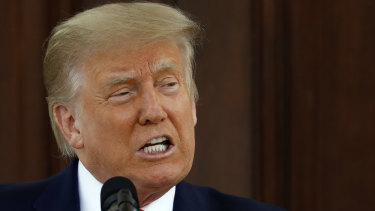 US President Donald Trump called out the military-industrial complex.Credit:Bloomberg

"I'm not saying the military is in love with me. The soldiers are. The top people in the Pentagon probably aren't because they want to do nothing but fight wars so that all of those wonderful companies that make the bombs, make the planes, make everything else stay happy," Trump said.

"But we're getting out of endless wars," Trump added. "Some people don't like to come home. Some people like to continue to spend money. One cold-hearted globalist betrayal after another, that's what it was."

Such criticism of military leaders by a sitting president is highly unusual.

White House Chief of Staff Mark Meadows on Tuesday said Trump's comments were not directed at Defence Secretary Mark Esper, Army General Mark Milley, who serves as the chairman of the Joint Chiefs of Staff, or other military leaders.

"That comment was more directed about the military industrial complex," Meadows said on Fox News, using a term that refers to the US military establishment and defence industry.

Meadows did not mention any names or explain specifically who Trump meant when the president referred to "top people in the Pentagon." Trump appointed both Esper and Milley to their current posts.

Trump's comments followed media reports last week that he had called fallen US troops buried in Europe "losers" and declined to visit an American cemetery in France in 2018 because he thought it unimportant. Trump has denied the reports. 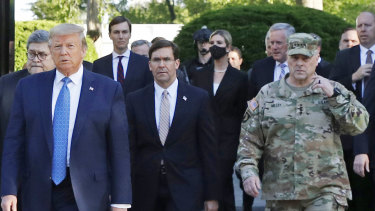 Areas of disagreement between the Republican president and Pentagon leaders have included Trump's threats to deploy active-duty troops in response to a wave of protests against racism and police brutality – a step Esper and Milley both opposed.

Milley, the top US military officer, in June also said he made a "mistake" when he joined Trump as the president walked from the White House to a nearby church and held up a copy of the Bible for a photo opportunity after authorities cleared away protesters using chemical irritants and rubber bullets.

Trump has faced sharp criticism in recent months from senior retired military leaders including retired General James Mattis, the US defence secretary during Trump's first two years in office who accused his former boss of trying to divide Americans.