‘Advertising on MailOnline is helping take my cycle start-up up a gear!’ One entrepreneur on his mission to get Britain on their bikes!

For thousands of entrepreneurs across the country, challenges caused by lockdown restrictions created an ideal opportunity to launch new business ideas.

When commuters started to work from home and use public transport less, Ian Steed believed it would be the perfect time to realise his dream to sell his self-designed bicycles.

The 43-year-old, from Islington, north London, first fell in love with bikes when he was a child, when his first set of two wheels meant freedom to explore and enjoy countryside adventures.

It was with this in mind that Ian started Steed Bikes, offering stylish fixed gear and single speed bikes for urban travel, in April this year. 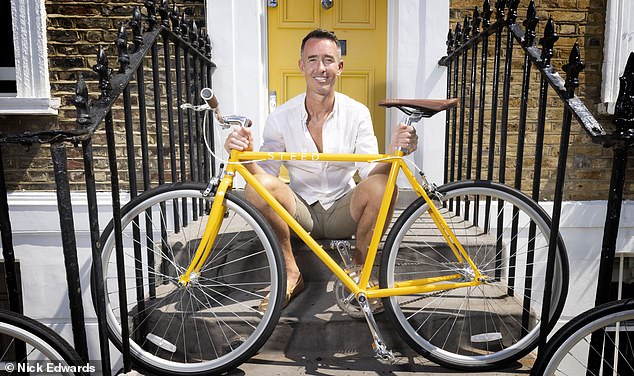 And although lockdown had caused a surge in demand for bicycles, launching a new product during the pandemic brought its own challenges.

Ian said: ‘Lockdown was a good thing for the bike-riding world as people were just jumping on their bikes – they didn’t want to get on public transport anymore.

‘But it also presented a problem as we couldn’t get hold of the parts we needed to make the bikes, so we had to wait. In the end, the business launch was delayed by six months.

‘Basically, the bike components couldn’t be made quickly enough to meet the demand for the bikes, which was caused by lockdown.’

Ian then spent the next few months marketing his new business on social media, raising awareness of his brand, and the two styles of bikes he offers.

His message included how not only did riding a bike to and from work mean avoiding public transport, and not having to wear a mask, but how it could improve fitness levels, too.

‘We have the Stallion at £350 and the Thoroughbred at £425. Other bikes that look like ours and ride like ours are more like £800, but we wanted this to be much more affordable,’ he said. 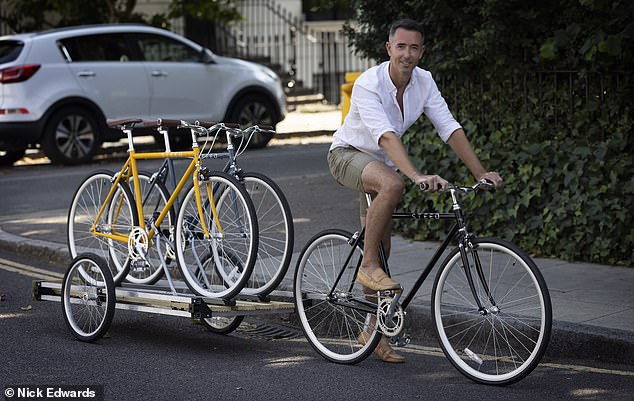 ‘It’s been amazing to be a part of such a huge platform as MailOnline, with such a broad reach’

‘We also offer a lifetime guarantee and we use quality components, which was part of why we were delayed due to Covid, as we didn’t want to settle for cheaper options.

‘So for a bike that has a lifetime guarantee, is available UK-wide with free delivery, it’s a good price.

Ad impressions (how many times the ads were viewed): 455,570 in less than a week

‘For small start ups, this is hugely positive’

‘I designed the bikes too. The thinking was always that I wanted them to be swift, smooth and stylish, so I had to meet those three criteria – as well as the bikes being affordable and reliable.’

Ian said that as a small start-up, brand awareness has been a priority, and as such he was one of the first entrepreneurs to take advantage of MailOnline’s new advertising platform, Ad Manager.

The innovative service puts the control firmly with the business owner, and means people can advertise their brand to MailOnline’s huge audience of 25 million, without a hefty price tag.

As well as being able to target more potential customers in a specific area than local titles, you can also target customers by postcode, interests and life stage.

What’s more, the campaign is very easy to set up, and can be live within just 24 hours.

Ian said: ‘It’s been amazing to be a part of such a huge platform such as MailOnline. I really like that it has such a broad reach, and that you can tailor your ads to specific demographics, and how you can drill down to specific criteria such as location and age groups.

‘We had a video made earlier in the year to give people an idea of who we are, and that video formed part of the Ad Manager campaign.

‘We had static ads too, including a picture of one of the bikes, and we had a few different versions of those, which were great for brand awareness.

‘The campaign has been hugely positive.

‘There’s been a really, really big surge in web traffic. The goal was click throughs, and we had 800 extra clicks thanks to the campaign – and the hits to our social media pages have risen as well.

‘Eight hundred extra people looking at the website in just seven days is great, especially as we’re still so small and have just started.’

MailOnline’s new, easy-to-use Ad Manager platform is ideal for SMEs looking to reach a large, but targeted audience of thousands of potential customers.

Ad Manager enables small businesses to reach more adults across all UK regions than ever before, with hyper-local advertising for relevant, affluent customers.

You can also target customers by postcode, interests and life stage, ensuring you reach as many of our 25 million consumers as you choose.

There are no hidden fees and you can control everything, from budget to target and audience to creative design.

Ian’s passion for bicycles started when he was bought his first one as a child – and with it came endless possibilities to explore and enjoy adventures.

His father told him their surname – Steed – meant horse, and that bikes are the modern day equivalent, and he became hooked on going for rides with his ‘trusted steed’.

‘I started Steed Bikes during lockdown, but it’s been an idea of mine for a long time.

‘I remember getting my first childhood bike and suddenly my world opened up. We lived in a town but by getting a bike I could go and explore the countryside around me and go on adventures, and I just thought it was fantastic, the feeling of exhilaration and freedom. I’d never had that before.

‘I always thought of my bike as my trusted steed, and we always went on adventures together, like knights.’

Ian’s love of riding followed him into adulthood and he found himself looking at how to design the perfect bike – wanting them to be swift, smooth and stylish. 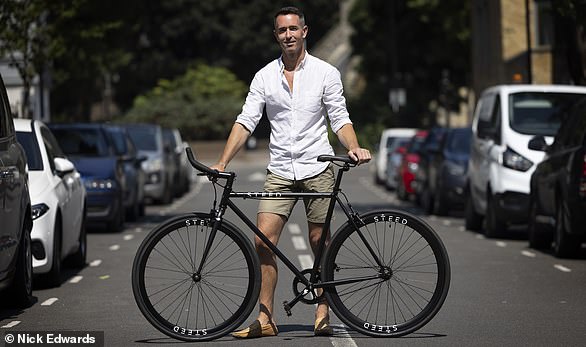 Ian’s business was born after his childhood passion for bikes led to him working on a design for a fast, stylish and reliable bike

‘I’ve had a lot of bikes over the years, but they can be very expensive, or you can buy the beautiful bikes that end up falling apart, so you end up spending more than you wanted to in the first place.

‘My designs and my business idea were about offering a great riding experience, that doesn’t fall apart, and that’s also affordable for people.

‘When lockdown hit, I had some time to finally set up the bike business that I’ve always wanted.’