Washington: After below-freezing temperatures knocked out power to their Houston apartment, Jael Sanchez and Randy Castillo began to feel like they were living at the end of the world.

With no heat and no working stove, the couple and their 11-year-old daughter hunkered down in a makeshift bedroom fort made from nearly a dozen blankets, and did their best to heat cans of soup over an outdoor grill in the snow. One neighbour lit a rubbish fire; another used a car to ram open the electronic gates that typically control who can enter and exit the complex.

“Eight hours into Houston not having power, and we were already having an apocalypse here,” Castillo joked shortly before midnight on Tuesday. 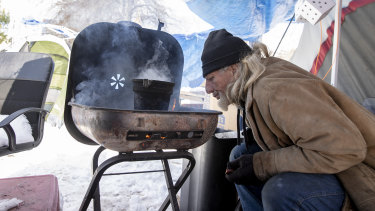 Hawk Palmour tends a fire he used for heat and cooking at a homeless camp in Austin, Texas.Credit:AP

By then, the outage at the couple’s home had lasted for close to 24 hours and the temperature outdoors had plummeted to minus-7 degrees. Inside wasn’t much warmer, Castillo guessed, since he and his family could see their breath. And it would only get colder before morning came.

Still, the couple emphasised, they were lucky to have camping gear like headlamps and portable cellphone chargers to help them get through one of the region’s coldest nights on record.

Many others in Houston – and across the central United States – found themselves literally in the dark, cut off from the outside world as they hunkered down in poorly-insulated homes that weren’t designed for such extreme weather. 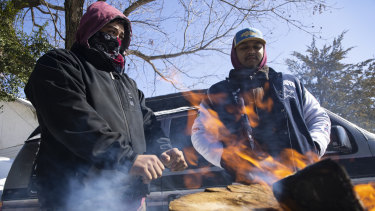 Brothers Alfredo Colon, left, and Eduardo Colon chat over a fire in front of their East Dallas homes after the family lost their power.Credit:AP

As of late Monday night, more than 4 million households in Texas alone lacked power due to a catastrophic set of circumstances that hobbled the state’s power grid, and those attempting to seek shelter elsewhere faced both dangerous road conditions and potential exposure to the coronavirus.

“I’m trying not to think about it, but there’s a chance we might find a lot of people dead in the next few days,” Sanchez said.

By Monday evening, law enforcement in the Houston area had already said at least two deaths were likely due to the freezing temperatures.

As the outages stretched into Tuesday morning, it became apparent that some Texans’ efforts to stay warm were also putting them in danger. 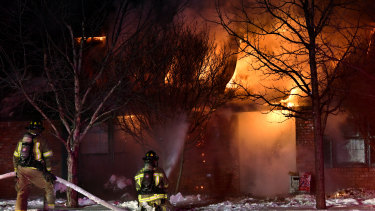 Abilene, Texas firefighters battle a house fire. Crews were only able to draw water from one hydrant because all three city water treatment plants were offline due to power outages. Credit:AP

Some opted to spend the night in their cars with the engines running, prompting warnings about the risk of inhaling toxic fumes. And one suburban Houston family attempted to heat their apartment with a charcoal grill, leading two adults and four children to be hospitalised with carbon monoxide poisoning, according to WAVY.

Many houses and apartment buildings in Texas and other parts of the Sun Belt are built with minimal insulation, meaning that residents couldn’t count on their homes to stay warm for long once the power went out.

On social media, Texans described frantically trying to reserve rooms at hotels, only to discover that they either lacked electricity or were already fully booked.

Kevin Ramirez, a storm chaser in the Dallas area, tweeted late Monday that he and his family had opted to spend the night “huddled up praying” in a hallway closet that usually serves as a tornado shelter since it seemed to be the warmest part of their house.

“Get in one room with your family, bundle up, put blankets on, stay warm,” Harris County Judge Lina Hidalgo advised residents on Monday, saying that was the “best recommendation” that she could offer at the moment.

Sanchez and Castillo followed that advice, providing their daughter with colouring books and puzzles while turning to Reddit for tips on preventing their pipes from freezing.

While they worried about neighbors with health issues, they figured their family would get through the night without a problem if they stayed ensconced under layers of blankets in their king-size bed – “just trying to igloo it up,” as Sanchez put it.

But they also knew that they risked running out of food if the blackout lasted much longer.

With no way to use their electric stove, they couldn’t cook most of the groceries that they’d stocked up on. Shelves at their neighbourhood stores were emptied out and a handful of vendors were charging “an arm and leg” for basic supplies, Castillo said.

Meanwhile, people all over the city were becoming desperate for hot meals, and footage posted by KTRKshowed a line of roughly 50 cars wrapped around a Burger King on Monday night.

Both Castillo and Sanchez expressed shock and anger at the fact that so many vulnerable people in the city had been left to fend for themselves without heat, light, hot water, warm meals – or even access to the news.

(The Houston Chronicle and the Austin American Statesman each announced on Monday that they were unable to distribute a print edition due to the power failure – something that didn’t happen in Houston even during the catastrophic flooding of Hurricane Harvey in 2017.)

Though unusual for the area, the cold snap had been predicted far in advance, giving officials plenty of time to prepare, the couple noted.

“I think we’ll be okay,” Castillo said. “But I do think we’ll see a nightmare situation in the next few days.”