George Clooney and Julia Roberts take another dip into romantic comedy with this Bali-set film. 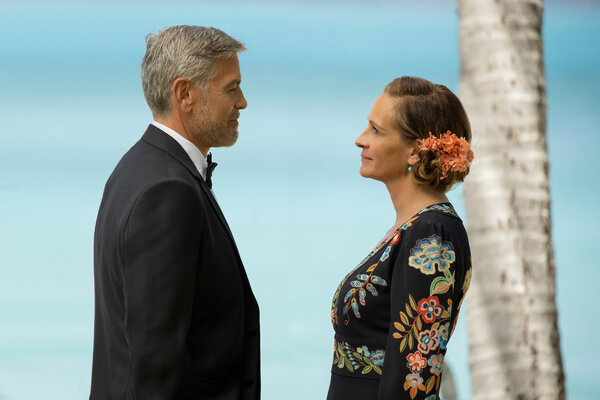 “Ticket to Paradise,” the latest vacation romp from the filmmaker Ol Parker (who penned “The Best Exotic Marigold Hotel,” and wrote and directed “Mamma Mia! Here We Go Again”), is a screwball adventure that forgets to pack the laughs. Having made a mint off his picturesque travelogues of Jaipur and Greece, Parker — who never met a mosquito that wasn’t edited out in post — now concocts a fantasyland Bali where an American law school graduate named Lily (Kaitlyn Dever) falls in love with a dimpled kelp farmer (Maxime Bouttier) and agrees to marry him one month after he quite literally fishes her from the sea.

The script by Parker and Daniel Pipski has scrubbed away any apprehensions concerning economics, education or class. (Lily’s intended, Gede, lives in a well-appointed beach hut filled with leather-bound books.) Nevertheless, Lily’s engagement proves to be the one thing able to unite her estranged parents David and Georgia (George Clooney and Julia Roberts), who hop on a plane to prevent the wedding. Any apprehensions the audience might have concerning the plot are confirmed during this flight sequence where the spiteful exes discover that not only are they stuck in the same seat row, but Georgia’s current boyfriend, a puppyish Frenchman (Lucas Bravo), is — surprise! — the pilot.

Such contrivances (and the even more ludicrous ones to follow) could work if the comedy vibrated on the edge of mania, if Roberts had a jolt of Katharine Hepburn’s wackadoo electricity or if Clooney’s Clark Gable-esque grin allowed him to convincingly grab a spear and hunt a wild pig when he hasn’t eaten since lunch. But these stars are too aware that the film’s draw is simply seeing the two of them together. Roberts and Clooney wear their stature like sweatpants, rousing themselves to do little more than spit insults like competitive siblings. They’re selling their own comfortable rapport, not their characters’ romantic tension.

When Parker needs to project that Roberts is steaming mad, he puts a clothes steamer in her hand so she can deliver her gripes between gusts of hot air. Dever, a major talent who will likely win her own Oscar someday, is too earnest to commit to inanity, while the marvelous Billie Lourd — the one cast member who can execute the tone — is squandered in a bit part where her sole personality trait is being drunk.

Eventually, the film succumbs to the actors’ delusion that they’re in a sincere dramedy where people also conveniently get bitten by poisonous snakes. The score shifts from playful flutes to somber piano chords; the lighting remains golden, bathing the actors in an apricot glow at the expense of forcing half the movie to take place at sunrise or sunset.

Locals know best whether Parker’s depiction of Balinese nuptials is accurate. (This critic is so far unable to confirm the rite where a bride taps her bare foot three times on a coconut.) The more authentic custom may be when David and Georgia resurrect their old college ritual: beer pong. It’s the film’s best scene as the soundtrack blasts House of Pain’s “Jump Around” at such a volume that there’s no emphasis on dialogue, only the visual delight of Julia Roberts and George Clooney goofing around.

Ticket to Paradise
Rated PG-13 for strong language and a mild suggestion of sexuality. Running time: 1 hour 44 minutes. In theaters.