One of The Office fans’ favorite episodes involving Pam and Jim is “Casino Night,” when Jim takes a huge risk and tells Pam, who is engaged, that he’s in love with her. They share a kiss later in the episode after she calls her mom to tell her what happened in the parking lot. The Office Ladies’ May 13 podcast does a deep dive into the episode, with John Krasinski providing some additional behind-the-scenes details. 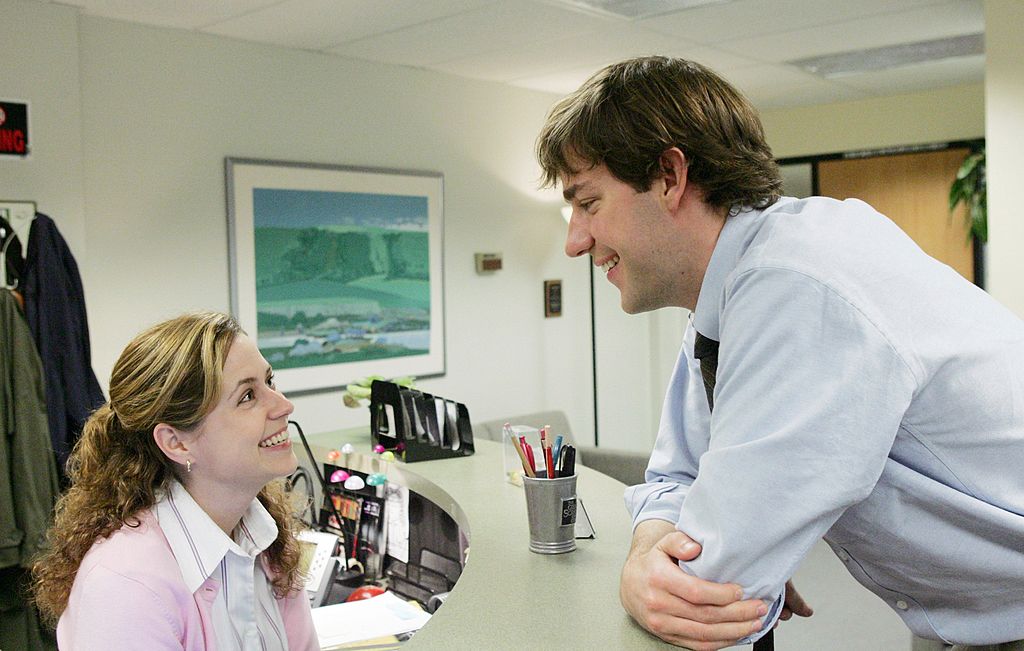 ‘Casino Night’ is a turning point for Jim and Pam

In The Office Season 2 Episode 22 “Casino Night,” written by Steve Carell, Michael plans a casino night event in the warehouse to raise money for charity and ends up with two dates, Jan and Carol. Meanwhile, Jim, feeling like he will never have a chance with Pam, has decided to transfer to the Stamford branch because he has “no future here.”

Pam’s fiancé Roy leaves the event and, in the parking lot, Jim finally tells Pam his feelings. She shoots him down because she’s engaged and Jim is seen wiping a tear from his face as he walks away. When Pam makes a phone call to her mother, he comes into the office, she hangs up and, as she starts to say something, he kisses her — and she reciprocates. They stare at each other in silence.

The co-stars dived into the behind-the-scenes details on Office Ladies, with Krasinski recalling how “the cells of my body were really buzzing” as he watched the crew hide cameras for the parking lot scene. He shared how he was “extremely nervous” for the scene, a feeling that he thought would work well since Jim was making this big confession to Pam.

The actor noted this was the biggest scene he had done on the show and recalled how director Ken Kwapis gave him notes and Krasinski said it was a “layup for me because I lived it.” So many girls had friendzoned him in high school, he told Kwapis, “Bro, it’s called my default setting.”

“People always ask about the kiss, but this was the scene we worked hardest on. And it makes sense to me,” Fischer shared. “Saying ‘I’m in love with you’ is such a vulnerable thing, and you do it so honestly, John.”

In the scene, Roy leaves and Jim and Pam are alone in the parking lot after he drives off. Fischer recalled how they came up with some banter on the spot before Jim nervously tells her “I’m in love with you.”

She tells Jim she “can’t” and says he has no idea what his friendship means to her and Krasinski improvised “Don’t do that.” His delivery of that line, Fischer said, was heartbreaking. “My heart dropped into my stomach,” she shared.

Fisher also recalled that they did a number of takes and that Krasinski cried in a couple but she believed they used the first time. “It wrecked me,” Fischer said.

One of these is a real kiss. #TheOffice

Things in the parking lot might not have gone down how Jim hoped and Pam returned to the office to call her mom to tell her what happened. “It’s not even a big kiss, it’s a little kiss… but it’s the perfect kiss,” Fischer shared of the fan favorite moment.

Krasinski revealed it was his first acting kiss ever and he was so nervous. There were discussions about how they would do the kiss: how long does it go on, how much does she kiss him back, and how it plays out. The director decided that one secret spy shot camera in the kitchen would capture the moment.

They never rehearsed it on the stage together and they had to get it in one shot because there wouldn’t be another camera to cut to. Jim walks in as Pam is on the phone, she hangs up, and he kisses her — and she returns the kiss.

They did three takes of the scene and they used the last one. Interestingly, with only one camera, there is no way of seeing Pam’s face after to see her reaction.

As a sidenote, Fischer said they received questions about the phone call between Pam and her mom and there was no one on the other side so she had invented her mom’s dialogue and wrote it on her script so she could have the right reactions.

What is Pam’s “yeah, I think I am” line in response to? Fischer confirms that it’s in response to her mother asking, “Well sweetie, are you in love with him?”