SPOILER ALERT: The story includes details about the Season 4 finale of The Good Doctor.

The conclusion of The Good Doctor’s two-part Season 4 finale marked the last episode as a series regular for star Antonia Thomas who is leaving the ABC medical drama. In addition to bidding goodbye to her character, Dr. Claire Browne, the Guatemala-set finale featured major developments for all other San Jose St. Bonaventure doctors on the trip as well as good news for Miguel, the patient with an adorable “ugly” dog and no family who was heartbreakingly taken off the list of 12 people selected for life-saving operations after he developed a last-minute health complication.

Foreshadowing what was to come for Claire, Dr. Karla Saravia (Allegra Fulton), the head of surgery at the local hospital who had been paired with her in the OR, told her early in the episode that there are three kinds of foreign doctors who come to Guatemala, those who care too much, those who care too little and a those who learn to distance themselves to do their job. While Claire said she hoped she was in the third group, Karla told her, “You are in your own group. You care so deeply but it only gives you more strength.” 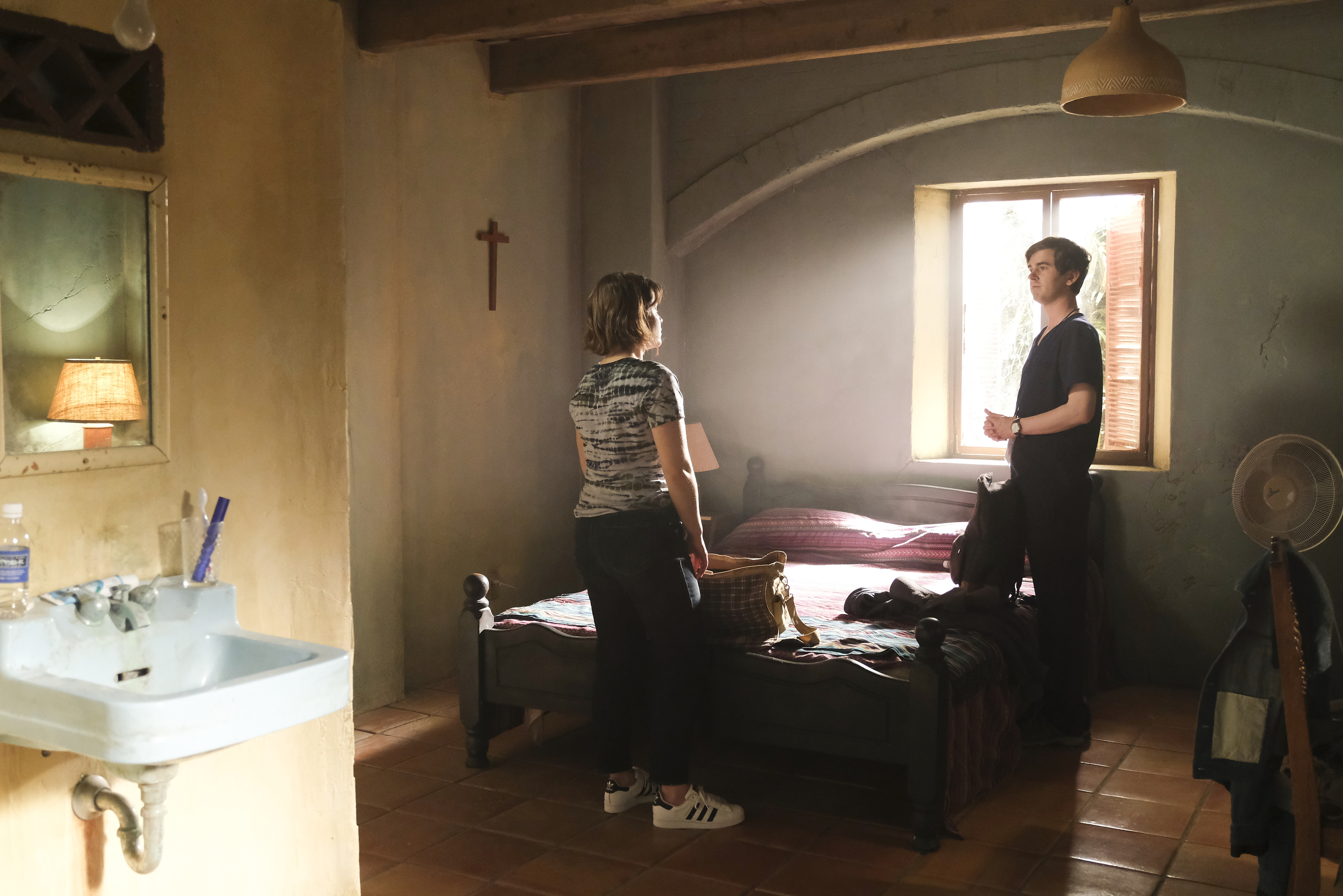 Lea was packed and headed to Hershey but the woman with a newborn baby at the hospital, whose image had triggered a new wave of grief for Lea in Part 1, asked her to help her with the baby who was having respiratory problems. Lea, with some assist from Shaun, cared for the baby girl who, after some scary moments, was OK.

Shaun made a video call to Glassman admitting that he was “not doing well at all.” “Lea is sad and I don’t know how to make her less sad,” Shaun said.

Glassman, who is going through major marital problems, did not offer advice. “I’ve always loved that you have asked me for advice and I always will but I’ve noticed the last while, you’ve needed me less and less,” Glassman said. “It got me thinking… you can do anything, you are good at this, better than you think.”

Most doctors faced unforeseen obstacles during their surgeries.

Shaun was in the middle of a risky operation when the power suddenly went out, and he had to rely entirely on his feel.

Marcus Andrews urgently needed titanium mini plates after he had to replace more bones than anticipated for the young boy with a facial embolism. Nurse Ana Morales suggested going to a dental surgeon catering to the rich. The dentist had the plates but jacked up the price. Andrews ended up giving the guy his wedding band as payment. He admitted to Ana that he had been flirting with her amid marital issues, and she told him that he would make his marriage work.

Claire’s patient, a mom with gallstones, turned out to have gallbladder cancer. Removing the tumor would require three times the time allotted for the surgery. She asked Dr. Audrey Lim and Dr. Andrews to step in but neither could help without endangering their own patients. Despite Claire’s lack of experience — she had never led such a complex surgery — “we should let her keep going,” Lim said, noting that the woman would die without the surgery anyway. “Claire gives her a fighting chance.”

Later, Claire’s patient started bleeding out. She ran to Shaun for a consult. There were two possible sources for the bleed, and if she guessed wrong, the woman might die. Shaun noted that one of the options was statistically more likely but Claire believed it was the other.

“Neither of us know for sure but you are good at this, better than you think,” Saun told her, channeling Glassman. She went with her gut and was right. The woman was saved.

Dr. Lim and Dr. Mateo Rendón Osma’s (Osvaldo Benavides) relationship deepened as they too had to overcome difficulties during their surgery. They shared things that were very personal – she revealed that she has PTSD, he told her that he had an outstanding warrant in the US stemming from an arrest for pot position during his residency that “got physical.”

As he was seeing her off on the bus to the airport, Mateo told Lim that he was considering getting a lawyer to straighten out his legal issue so he could come visit her in San Jose.

With Benavides joining the cast of The Good Doctor as a series regular next season, it is safe to assume that he would follow through on his plan.

On the same bus trip to the airport. Karla offered Claire to stay as a surgeon at the clinic. Lim told Claire he should take the job.

Claire wasn’t sure. “I cant’t speak the language, I don’t know anyone here, I just started relationship with my father. I’m not ready,” she said, to which Lim responded,  “All legitimate concerns but what I didn’t hear is one single reason you don’t want to do this. You’ve spent so many years thinking your heart was a liability, it made you care too much, it hurt too much. But maybe here caring too much is exactly what’s needed.” 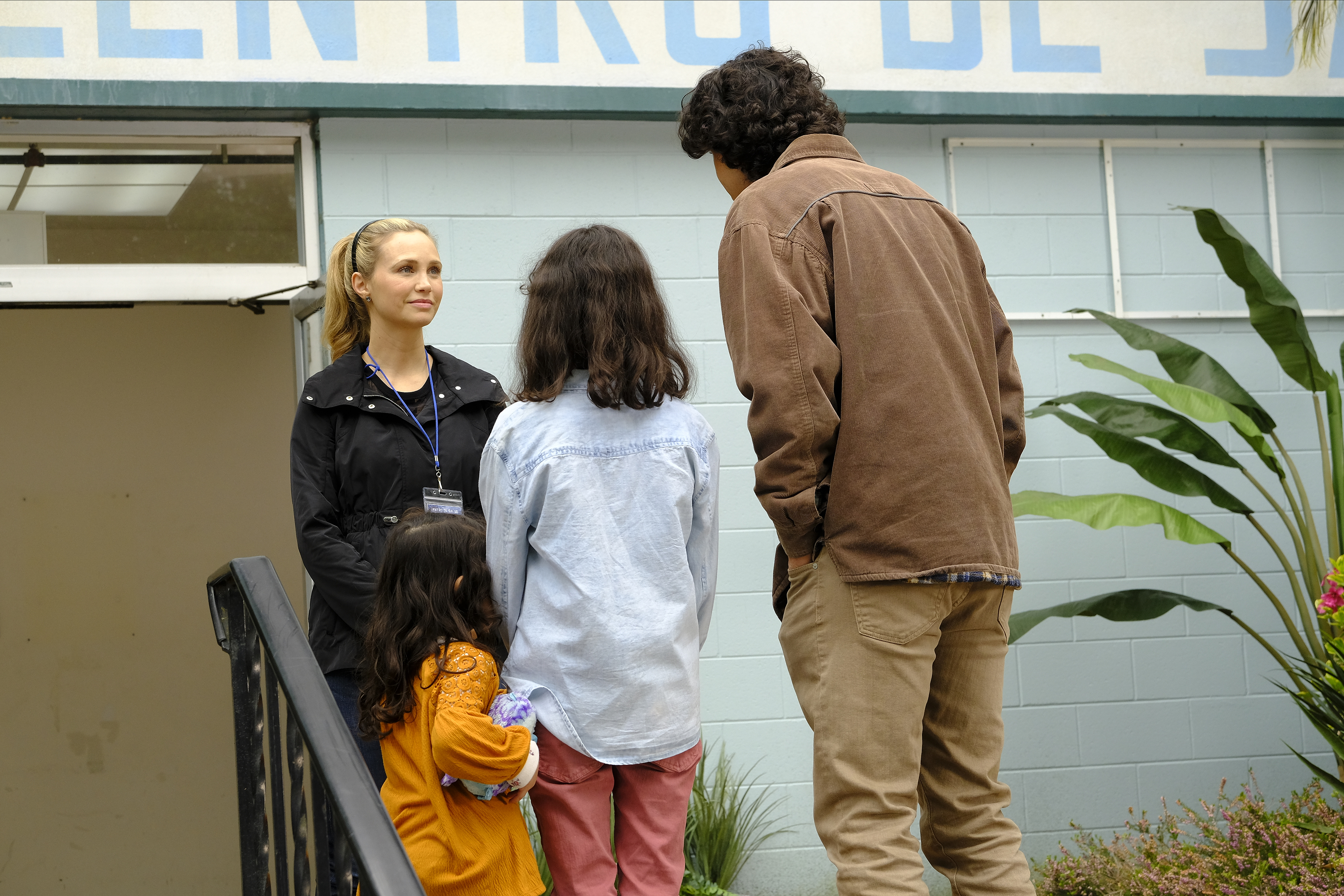 Morgan’s patient, a young man with a hernia, came back after he had ignored post-op instructions to rest and instead went back to work to provide for his siblings. She fit him in but faced a complication. Alex came in and finished the surgery for her.

“You inspire me and annoy me, a small price to pay,” he told a distraught Morgan after the surgery. On the bus to the airport, she told him she wanted a friend and wished him and Heather the best. He told her that he had broken up with Heather the night before and the two admitted that they had feelings for each other.

At the airport, Claire said goodbye to her colleagues.

“You were far too good for us anyway,” Andrews said. “I’m proud of you Dr. Browne.” 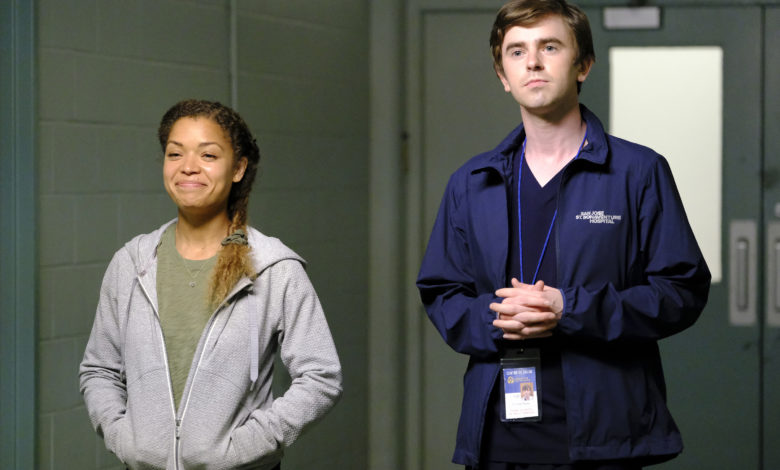 She went to Shaun last.

“I’m sad that people need to move forward,” he told her. “I hope you are moving forward.”

“I think I am Shaun,” Claire replied.

Shaun noted that he had had never hugged her, and she embraced him for the first time.

After Claire left, Lea told Shaun that she was not going to Hershey and that she wanted to spend the rest of her life with him. She asked him to marry her, and he said yes. (or “Of course, I love you,” to be exact.)

Shaun then shouted, “We are getting married,” and, as he had done with every major development in his life over the past four years, he immediately added, “I have to tell Claire.”

The finale had one more heartwarming ending in store as Claire, joined by Karla, kicked off her first surgery as a doctor at the hospital. The patient was none other than Miguel, who had been last seen walking away from the clinic with his little dog in toe, likely destined to die, as Shaun waved at him. Miguel would now be saved too as his loyal dog sat patiently outside, waiting for his human.