This may not sound like the right time to recommend a vérité documentary about “good cops” making a genuine effort to stop killing black civilians, but even though Peter Nicks’ 2017 film “The Force” doesn’t exactly arrive at a happy ending, it’s an instructive one right now. “The Force” is a portrait of police reform that illustrates the futility of police reform, and an urgent film to watch in the wake of George Floyd and Breonna Taylor’s murders (among so many others) for the same reasons that it might initially seem like a reprehensible choice.

In 2003, the Oakland Police Department was placed under federal oversight following allegations that four veteran officers known as the “Rough Riders” had brazenly abused their power; as part of a settlement that paid a cumulative sum of $10.9 million to 119 plaintiffs, the OPD was required to comply with 51 court-ordered reforms aimed at eliminating systemic biases and establishing trust between the police and the citizens they’re meant to protect and serve. Just a few months later, the OPD responded to an anti-war protest at the Port of Oakland with such indiscriminate and overwhelming force that nine random bystanders — longshoremen waiting to begin the day’s work — were shot with rubber bullets.

Between 2000 (when the Riders suit was initially filed) and 2012, there were 87 officer-involved shootings in Oakland, 39 of which were fatal. Nineteen of the victims were unarmed. Nine were shot in the back. The OPD consists of roughly 750 cops, and yet dozens of them were somehow involved in multiple incidents of murder. Other abuses of power abounded: One officer pled no contest to charges of false imprisonment and civil rights violations after 16 Asian-American women accused him of groping them in his police car. Two black men were unlawfully forced to strip naked on a crowded street while their vehicle was searched.

Failing to implement the promised reforms, police chiefs were fired so often that the carousel of ineffective leaders began to camouflage the department’s abject lack of progress. Five police chiefs came and went before 39-year-old Sean Whent was hired to oversee the OPD in 2014, the cool-headed Gen Xer pledging to finally overhaul what one attorney referred to as “maybe the worst police department in the country” and make adherence to the consent decree his top priority. That fall, after the murder of 18-year-old Michael Brown inflamed scrutiny of racist police violence nationwide, Whent either invited or permitted Nicks to embed himself behind the thin blue wall of silence and document Whent’s efforts to change the OPD from the inside out.

The first thing you notice about “The Force” is that Whent sincerely believed the film would be a good look for him, because he believed in the potential for his efforts to reform the OPD. And those efforts were not insubstantial. For starters, Whent openly confronts many of the critical truths that previous chiefs had tried to deny. “Even the suspicion of misconduct can damage the trust we’ve worked so hard to build in this community,” he tells a diverse classroom of new cadets at the beginning of the film. “The nation was founded on a fundamental mistrust of government, and we are the most visible sign of that government. We give you tremendous authority, and a gun. It’s not unreasonable for people to expect you to explain why you do the things that you do.” It’s the exact message you would hope impressionable new recruits have to hear before receiving their badges.

But the education doesn’t end there. The OPD’s 26-week training course also includes a visit from a prominent black pastor who comes in to screen footage of the Black Panthers and teach the recruits how the American police system evolved from 17th century slave patrols, making the the relationship between cops and the black community toxic before it really began. We watch as the cadets analyze and debate the body cam footage from a shooting, and experience what it’s like on the other side of a police encounter; we watch as the trainees are exposed to tear gas, and the beefiest guy among them is reduced from stone-faced stoicism to “I can’t breathe” in a few seconds flat. Surely, you think, he will remember that feeling in his throat when he considers tear gassing someone in the field.

“The Force” gives its newest officers every opportunity to earn our sympathies. Nicks’ film is as restless as Frederick Wiseman’s are patient, but that approach only gives added weight to every humanizing excuse Whent’s department is afforded. We’re told that the OPD is understaffed and stretched thin, but denied any super unsexy bureaucratic scenes in which the department’s budget is discussed at length (the brevity of Mayor Libby Schaaf’s cameo appearance is telling in more ways than one).

We do, however, watch the officers fill out exhausting “Use of Force” reports — a clerical headache that would make anyone think twice about unholstering their service weapon. We even come to know and “like” a bright-eyed trainee named Jonathan Cairo, and fear for his safety during a harrowing “what would I have done?” sequence towards the end of the film in which he pulls his taser on an agitated black man whose sister was just hit by a car. Cairo doesn’t fire it though, and is ultimately able to deescalate the situation; he’s the poster boy for a training program that halved the number of instances in which officers drew their guns on people. For a little while, anyway. 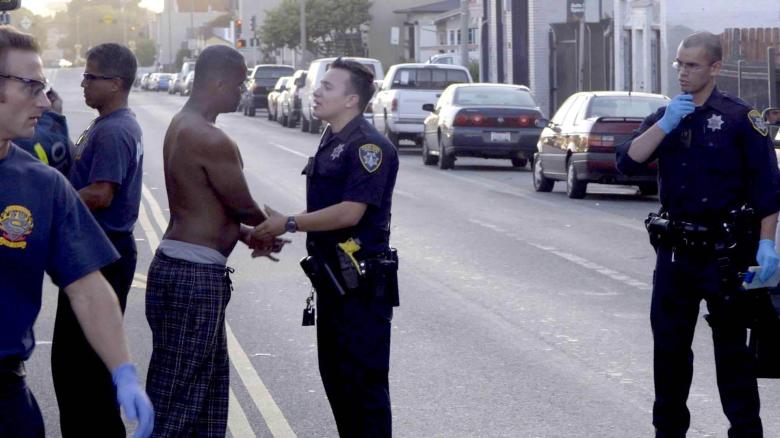 If you stopped watching “The Force” after an hour, you’d swear it was state propaganda that’s made all the more nefarious by its veneer of evenhandedness. Nicks — a mixed-race filmmaker who served a year in prison on a federal drug charge — almost certainly didn’t embark upon the project with the intention of absolving the OPD of its sins. However, “The Force” also doesn’t feel like it was made with the Trojan horse mentality of someone hoping to ambush Whent’s department from within.

Instead, the documentary is riveting for the way it seems torn between two different ways of looking at the same problem — both of which insist that the OPD can serve as an example, but they disagree on what kind. Whent, a well-intentioned white administrator who mistakes palliative care for a legitimate cure, believes that reforming the beleaguered OPD would prove that every police department in this country can be redeemed. By hanging on Whent’s every word and allowing him to position himself as a white knight capable of bringing justice to the Black Panthers’ hometown, Nicks begins to argue the opposite with equal force: If the OPD can’t be reformed, then none of the police departments in this country can.

Spoiler alert for anyone who doesn’t know about systemic white supremacy: They can’t, and lives are lost by how easily we’re fooled otherwise. Remember the attorney who said the OPD might be the worst police department in the country? That quote comes from a Politico article called “How a Dirty Police Force Gets Clean.” Later in that same article, the attorney takes stock of Whent’s administration and concludes that “I think we’ve turned a corner.” That article was published in March 2015 — the OPD go on to kill four black men between June and August of that year alone.

However, that has nothing to do with why Whent is abruptly replaced on June 10, 2016: His noble experiment only comes to an end when he tries to cover up some misconduct that threatened to distract from the greater good his department was supposedly doing. Why let the fact that a few officers have been abusing the same underage sex worker get in the way of progress? Or, you know, the semi-convincing illusion of progress?

“The Force” is made all the more fascinating by how flat-footed Nicks is caught by that bombshell revelation. In a stark contrast to the transparency we see in the first hour, the last act of this documentary is an aggregated mess of local news footage and secondhand reporting; it feels like watching one of those unfinished Orson Welles movies that someone tried to staple together with odds and ends from the cutting room floor. Despite spending the better part of two years staring at the OPD in extreme close-up, Nicks missed the flagrant abuse of power that was happening right under his nose. After that, it’s hard not to laugh when Mayor Schaaf hires and fires three new police chiefs in the span of nine days. Overwhelmed by the extent of the problem and scrambling to regain its perspective, “The Force” backs into a powerful conclusion that we’ve seen proven hundreds of times over on the streets of this country in just the last week: There is no real hope of healing a law enforcement system that’s poisoned roots snake back to America’s original sin, and requires police to dehumanize the population they serve until they no longer recognize themselves in the eyes of those looking back at them. When your job is to look for the worst in people, even the good ones are able to find it (quotas make sure of that).

Add in powerful unions, qualified immunity, and all of the other extralegal aspects of the American police system that Nicks doesn’t address by name, and you’ve got a slow-moving genocide that’s been gathering momentum for hundreds of years; trying to fix it with a few personnel changes is like rearranging the deck chairs on the Titanic.

Now imagine being surprised by the recent news that the OPD has been systematically undercounting its uses of force. There was a time when even Nicks himself might have been caught off guard by that revelation, but his relative naivete has served him well. Because his film’s open-minded optimism makes it susceptible to the same thinking that led Whent to shoot himself in the foot, “The Force” winds up arguing for the abolition of America’s police system in a way that a more straightforward piece of agit-prop never could; its destination feel especially credible — even inevitable — because it doesn’t feel as if Nicks were aiming for it from the start.

Instead, he steers this wobbly ship into port with the inclusion of a climatic scene in which a group of black community organizers propose a civilian police commission that would be for, by, and accountable to the people (it was voted into law on the same day Donald Trump was elected President). The OPD lives on, but must now contend with a civilian body that’s impervious to bullets. It’s a start. “The idea is not new,” one of the organizers explains. “The question is whether we have the moment in history right now and the collective will to actually make what’s been the people’s demand for 50 years into a lived reality.” They did then. We all do now.

“The Force” is streaming on Netflix.