Abel Ferrara’s latest psychodrama sends an ever-intense Willem Dafoe into the Arctic wilderness on a visionary reckoning with his memories and sense of self. 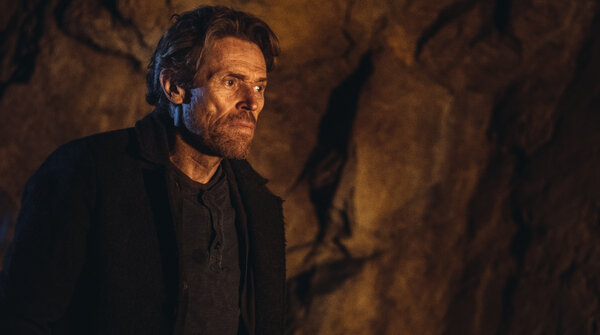 Everybody’s got a plan until a bear wallops them. That happens to Clint (Willem Dafoe) in “Siberia,” Abel Ferrara’s latest psychodrama, which is equally set in the snowy Arctic wilds and the desolate reaches of an unquiet mind. This bracingly pure dream journey starts with Clint as a frontier bartender in a cabin, serving the odd hunter or babushka, and follows him on a dog-driven sled chase through memories and visions.

The bear attack comes in an unforgettable smash cut, shattering Clint’s apparent plan to hide from the world. But unlike Ferrara’s most infamous creations — the bad lieutenants, the kings of New York—Clint’s transgressions don’t seem to be spectacular. That doesn’t stop him from ruminations and self-pity — over past relationships, an Eisenhower-era father (also played by Dafoe), or losing touch with a sense of soul. (Not to mention living with the world’s legacy of atrocity, which Ferrara invokes briefly and nightmarishly.) Also: mystics!

Dafoe, a close collaborator with Ferrara, brings the intensity and nakedness (not just physical) necessary for the film’s trip. I can’t think of other actors at his level who could keep a sense of true north in a nonlinear story like this, from bear scene to sex scene to earnest confrontations, amid quotations from St. Augustine and Nietzsche.

Visually, Ferrara sends him on eerie flights through day-for-night wilderness and into vertiginous caverns and sanctums (haunted by wistful musical motifs composed by Joe Delia). The film (co-written by Ferrara and Christ Zois) ends enigmatically, as dreams do. That refusal to stage an orderly conclusion or redemption might be the boldest thing about the movie.

Siberia
Rated R for the stuff that (some) dreams are made of, such as strong sexual content and disturbing violence. Running time: 1 hour 32 minutes. In theaters and available to rent or buy on Apple TV, Google Play and other streaming platforms and pay TV operators.