The small town of Paradise, California was created by those who were either looking for an escape, or wanting a rustic, small town atmosphere to raise kids. The impact of the 2018 Camp Fire that would ultimately destroy the town is all documented in Ron Howard’s new feature for National Geographic, “Rebuilding Paradise.” At the Summer Television Critics’ Association Summer Press Tour on Monday, the Academy Award-winning director admitted he didn’t want to make a film strictly about a fire, and the chaos it left. He instead wanted to spotlight the people of Paradise and how they coped with aftermath. “Many people did want the catharsis of talking about it,” Howard said. “I’m really grateful that the community … cooperated with us in that effort. It was a life-experience for me, an eye-opener.”

Howard, his producers Sara Bernstein and Xan Parker, as well as Paradise residents Steve “Woody” Culleton and Michelle Johns, came together to discuss the impact making the documentary had on them. Howard had directed with fire before, most famously in the 1991 feature film “Backdraft.” But he admits working with controlled fire is nothing compared to capturing the devastating chaos of an actual forest fire. Making “Backdraft” “under highly control circumstances,” Howard said, made him realize how fire could quickly go out of control. “I’ve never experienced anything like what I witnessed on the ground. Being surrounded by that level of destruction really does take your breath away. Words don’t suffice,” he said.

For Culleton, Paradise is a deep part of who he is. He arrived in the city on a Greyhound bus in 1981 where he admits he was the town drunk. But after eventually battling his addiction, he turned his life around and became the mayor of Paradise for 12 years. “This is my home … this is where I put my life back together,” Culleton said. “It’s like a great big large family. In the time of this epidemic it’s a great large bubble to be in.”

The initial production of the movie came together rather quickly; a perfect storm of events. “I really enjoyed learning about the [discipline] of the documentary medium,” Howard said. He’d previously done documentaries but explains this was his first dive into the world of vérité documentary filmmaking, wherein the filmmaker is recording things in the moment. 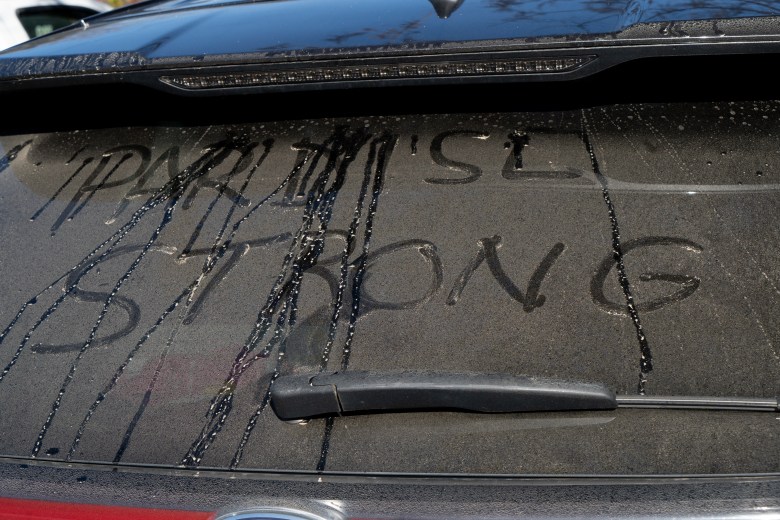 To do this, Howard knew “I wanted to find a subject that was more personal to me, somehow,” something that would give him curiosity and an emotional investment. His mother-in-law lived in Paradise the last five or so years of her life, so when the fire was happening, Howard gravitated towards it. His company, Imagine Entertainment, sent a team out to the city without any distributors in place or knowledge of where the story would be focused.

“It became about: Could we spend a year within this community? Would they graciously welcome us? And can we show an audience what it’s like, really, to walk in their shoes?” Bernstein said. “Our hope was that this film would be more about strength and community, would showcase the heroes who lived through the fire, remained committed to rebuilding.” Especially as communities are being battered by the global health crisis, the team hopes “Rebuilding Paradise” offers hope to people who believe they can’t move on.

“I was curious about the long tail of suffering or struggle,” Howard said. It’s one thing to survive a natural disaster, but it’s another “to flourish as a community or [an] individual.” Howard confessed that he had no idea what the obstacles would be, admitting his privilege. “That’s what I was curious about. It does frame up a lot of questions, it doesn’t aim to answer any of them,” he said. Instead, he wants the documentary to leave viewers asking what we expect from society, ourselves, and our government in a moment of crisis.

The crew on the ground heard thousands of stories from Paradise residents and solicited help from them in the form of footage they might have taken the day of the fire. “Everyone trusted Ron with the footage…that would honor what they had lost,” Parker said. They wanted to show the sheer panic and terror without taking things too far. “I wanted audiences to relate to what was going on as much as possible,” Howard said. “We wanted to try to create a ‘what if’ scenario” without reveling in sensationalism.”

The opening footage is the most “harrowing sequence … and I didn’t shoot or stage a frame of it” Howard said. The director explained that “We always had the title in our minds just as a goal, as a working title” but he questioned whether “Rebuilding Paradise” would appropriate in such a moment of devastation. “PTSD is a major factor in all of this,” he said.

When asked about how Paradise is preparing for future fires, Culleton said there are new fire codes in place throughout the state, but there are far more players in the game of protecting people than just the town itself. “We’ve added even more stringent codes here in Paradise,” Culleton said. “You have to be smart [and] have defensible space.” But the problems have to be solved by more than just local governments. Restrictions on logging and proper forest management have to be managed. With so many damaged and burned trees remaining, there’s often no place to put them short of landfills. “There’s a lot of complex problems if you want to solve fires in California,” Culleton said.

The biggest struggle for Howard and his producers came with the ending, which places the Camp fire in a global conversation about climate change. They decide to turn it into a coda for people to think about according to Bernstein. “We’re literally saying, with that sequence, what climate change looks like,” Parker said.