Only Fools and Horses continues to be a British staple in the world of sitcoms and Channel 5 shared a special documentary called We Love Only Fools and Horses. During the show, which included insight into off-screen relationships, viewers were reminded of the death of Grandad actor, Lennard Pearce. Rodney Trotter actor Nicholas Lyndhurst was particularly distraught after his passing in 1984.

Lennard Pearce starred in the final years of his life as Grandad in Only Fools and Horses.

He joined at the start of the comedy in September 1981 right up until his death, part-way through the series, in December 1984.

Production was underway for the episode Hole in One when he died and scenes that he had filmled before his death were reshot.

His character was replaced by Uncle Albert (played by Buster Merryfield) and the episode was put back in the series.

Steve Clark, author of Only Fools and Horses: The Official Inside Story, explained the genuine emotion felt by the cast.

He said: “In real life the cast and crew had only been to Lennard’s real funeral recently.

“Then they were back filming one down the road. But John wrote it so carefully.

“Of course it’s sad, poignant, moving, and then he quite brilliantly has the gag of the hat that’s gone into the grave.”

There was one cast member who was impacted by the star’s death significantly more than others.

Lennard was seen by Nicholas as the grandad he never had, and it was revealed he took the loss badly.

Director Tony Dow explained: “It was a tricky time, obviously we were all sad.

“But Nick genuinely, really really upset and didn’t come out of it for quite some time.

Lennard died following a second heart attack while the BBC sitcom was being filmed.

In a different Channel 5 documentary, Only Fools and Horses: Secrets and Scandals editor Chris Wadsworth recalled the news.

He said: “It was terrible, it wasn’t just the character who had died, we were saying goodbye to a really nice gentleman and a great character.” 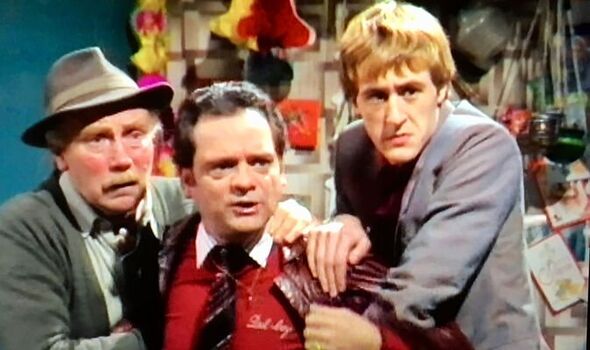