Megan Fox has never been shy about sharing her thoughts about sex and sexuality. The “Jennifer’s Body” actor also occasionally shares some of the lessons she’s learned about dating as a celebrity. One of them? Be wary of actors. “Actors aren’t necessarily the most intelligent guys you’re ever gonna come across,” she told Esquire in 2009. “They’re so easily manipulated that if you have any sort of control over your own sexuality, they’re just f**ked.”

However, Fox has been in relationships with a few actors. She dated “7th Heaven” star David Gallagher from 2003 to 2004 (via Us Weekly), and she confessed to being romantically involved with co-star Shia LaBeouf when they were working on one of the “Transformers” movies during a 2018 appearance on “Watch What Happens Live.” But her longest relationship was with Brian Austin Green, who she met in 2004 on the set of “Hope & Faith.” She was 18 years old at the time, and Green was 30 (via USA Today).

Green and Fox were engaged by 2006 and wed in 2010. Their relationship lasted about 15 years, but they temporarily separated in 2015 when Fox filed for divorce. They reconciled when she became pregnant with their third child. Their second split came in 2020, and Fox filed another petition for divorce (via E! News). Now, Fox’s romance with musician Machine Gun Kelly is making headlines, but she just reminded her fans that she’s not only romantically interested in guys. 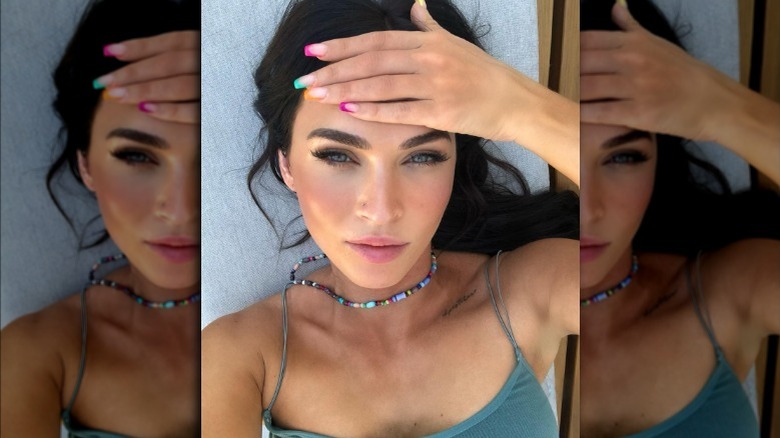 In celebration of Pride Month, Megan Fox took to Instagram to show off a fun, rainbow-colored manicure and share a reminder that she’s bisexual. “Putting the B in #LGBTQIA for over two decades,” she wrote in her caption. Fox’s post came after bisexual “True Blood” star Anna Paquin had to shut down social media users who accused her of not being “queer enough” because she’s married to a man.

The response to Fox’s post seemed to be mostly positive. “You were public way before it was safe to be…that’s bravery,” wrote one of her followers. One fan called her an “lgbtq icon,” while another deemed her a “BI-CON!!!!!” The actor came out as bisexual in 2008 while speaking to GQ. She also revealed that she fell in love with a Russian stripper named Nikita when she was 18 and got to know her while she was getting lap dances.

During that same interview, Fox confessed to having a crush on Olivia Wilde, saying that she’s “so sexy she makes me want to strangle a mountain ox with my bare hands.” In 2009, she told Esquire that she believes everyone is bisexual when they’re born, and she confessed that she’s a bit of a “hypocrite” when it comes to dating women. “I would never date a girl who was bisexual, because that means they also sleep with men, and men are so dirty that I’d never want to sleep with a girl who had slept with a man,” she said.