IT began as a get-together at a friend’s 40th playing Beatles covers — now this supergroup comprising members of Blur, Muse, Jet and The Zutons have released their debut album. 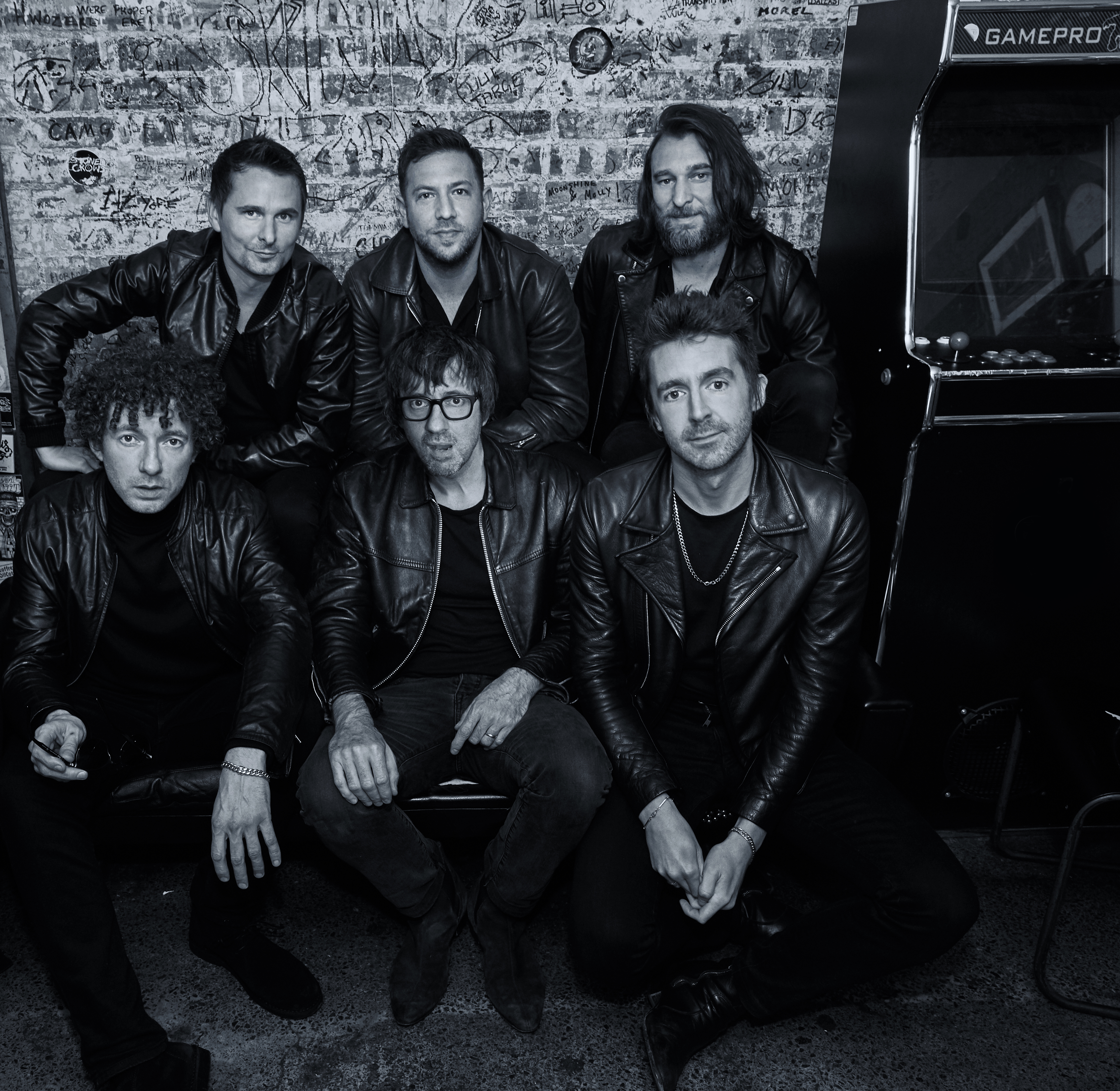 “We started it for a laugh,” says Coxon, the Blur guitarist, over coffee near his North London home. “It’s all meant to be fun — and everything is. But it doesn’t mean we’ve not worked really hard for the record to be really good. And the shows were great.”

Bellamy, who produced the album, says: “I stopped touring with Muse around October last year and took a month off, then the guys all came out to LA and we made the album.

“We were hanging out, had a really fun time and finished recording just as lockdown happened. I ended up doing the vocals on We’ll Meet Again and Fever because no one else was around. No one could come in any more.”

Both are mates with Davis. Coxon worked with him on his label Transcopic Records while Bellamy has known Davis “for years” and played at his 40th birthday bash in 2017.

Bellamy is on the phone from his LA home, where he has had a few sleepless nights with his four-month-old daughter Lovella.

He tells me: “I’m a bit knackered, as she’s been awake three hours every night. But she’s great. She’s laughing a lot.”

Bellamy is surprised how far this “Beatles covers project”, as he calls it, has come.

A high point was when the real Paul McCartney joined them on stage at a fashion show by the Beatle’s daughter Stella. 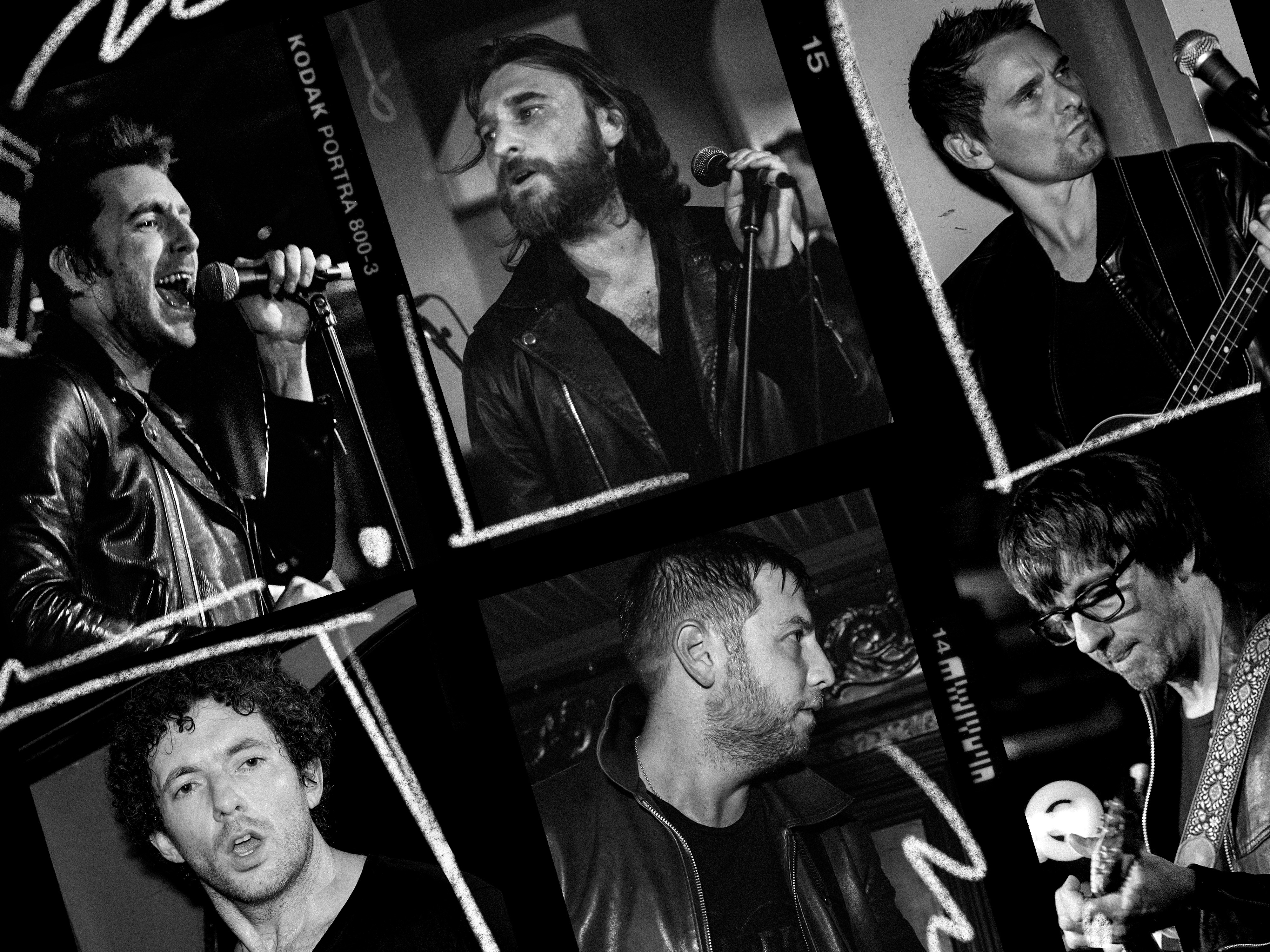 Bellamy, who had met Paul just once before, says: “It wasn’t planned, (it was) totally random.

“Paul just jumped on stage and started singing with us. For that one moment, we thought, ‘Hold on a minute . . . we ARE The Beatles!’”

Coxon, who joined later, says: “I’d bumped into Jet a couple of times at festivals and Miles at award ceremonies.

“There’s a good picture of me, Miles and Paul Weller at one event. They both look immaculate and I look like some bloke who’s just woken up on the bench in the park.

“I’d never met Matt, so it was great to see what makes him tick and how he approaches recording.

The band — originally named Dr Pepper’s Jaded Hearts Club Band — graduated from Beatles covers to Motown and Northern Soul to record the album. “I think it would’ve been boring if we’d stuck to Beatles covers,” says Coxon. “We’re saturated with The Beatles. Although it’s fun doing that stuff live, to record it would not have been a challenge.

“We’d have to do them so differently, which just wouldn’t work. And if we did them the same, they wouldn’t be as good as the originals.

“With the songs we chose, there was a lot of scope for dragging them into the 21st century.

“We used a lot of old-school sci-fi effects from the Fifties and Sixties, like the fuzz sound on the guitar — and the drums were recorded very traditionally. But there was a balance. In the editing, Matt was very forensic.”

The album includes covers of Marvin Gaye’s This Love Starved Heart Of Mine; Nobody But Me by The Isley Brothers; Barrett Strong’s hit Money (That’s What I Want), which was itself covered by The Beatles; the Four Tops’ Reach Out (I’ll Be There); and Love’s Gone Mad by Northern Soul great Chris Clark.

“I didn’t know a huge amount about the Northern Soul scene until last year, when we started looking at songs,” says Bellamy.

“Jamie and Miles knew a lot and when some of the songs were mentioned, me and Jamie started doing research. Then they all came out to Los Angeles and to my studio.” 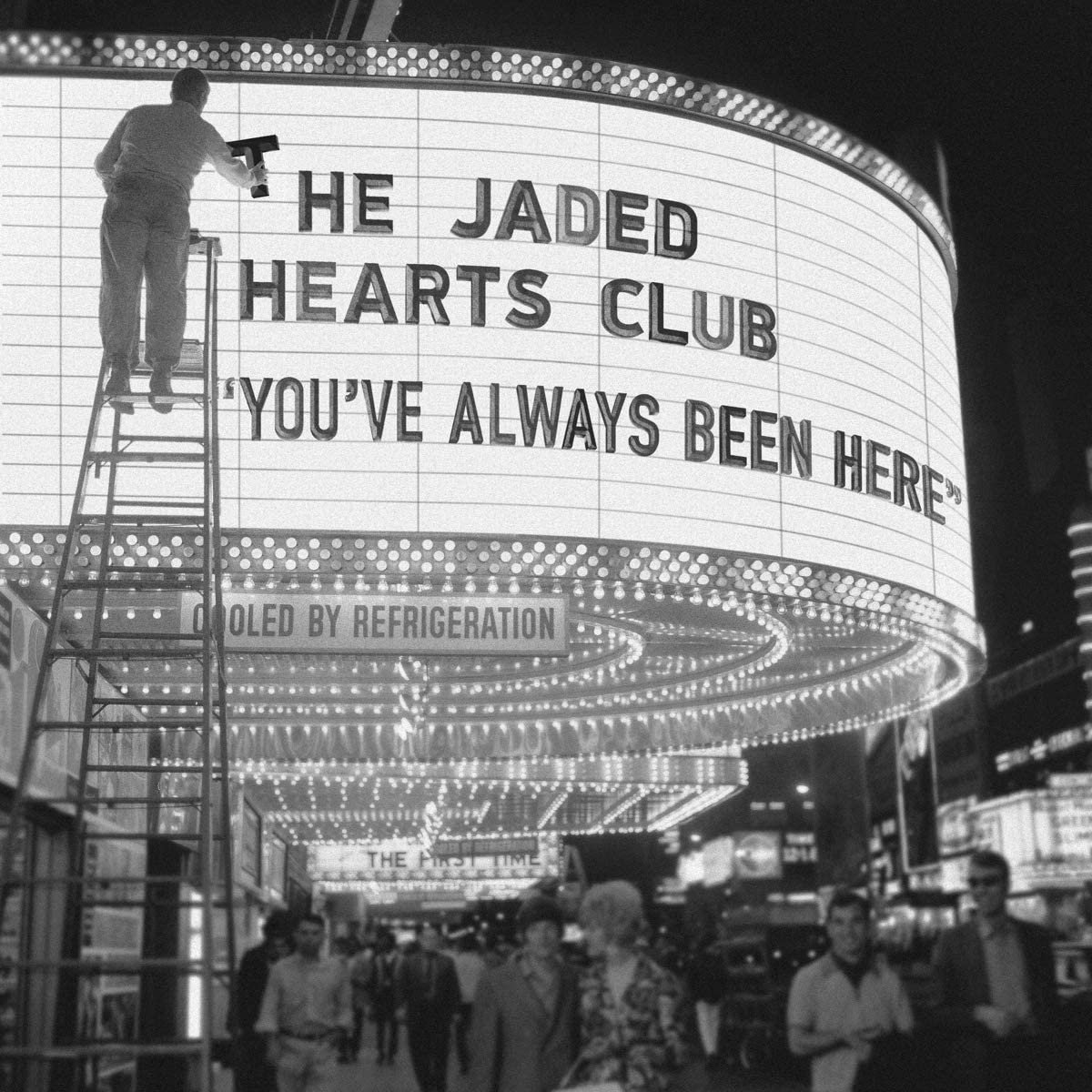 While the album was finished just ahead of lockdown, the pandemic put a halt to the live shows they had planned.

“Of course that was a huge disappointment for us,” says Coxon.

“But we’ll be out on the road again as soon as we are able.

“We’ve managed to do some stuff — like we recorded all the videos separately and managed to film I Put A Spell On You (by Screamin’ Jay Hawkins) for James Corden’s show.”

Coxon adds: “Working with musicians of such calibre pushed everyone to play their best. It was like being in a gang, at the start of Blur, but everyone had a lot more experience, knowledge and a work ethic. Matt was inspiring and full of good ideas.

“We all worked really hard on the arrangements so everybody could be heard. All the members, the characters, have equal presence. Everyone can really play and watching them in the studio was great. Personally, everything I do comes with a level of anxiety, which makes me f*** up.

“I overthink, I overprepare and I still f*** up, so I can’t win! But I’m getting better at dealing with any mistakes I make.” With Kane and Cester as Jaded Hearts’ main vocalists, Bellamy enjoyed time off as a frontman, relishing his producer role and playing bass.

“It’s nice to be another side of who I am,” he says. “Part of me is the quiet producer guy not the bravado frontman.

“It’s nice to let other people take the hassle that comes with being a frontman. Bass players and drummers get to party harder because as the singer, you have to take things more seriously. Bass player is a better role if you are trying to have fun!”

Coxon says: “The studio was a bit like a military school. Matt only called me by my surname. ‘Coxon, let’s do your parts.’ Matt is very funny.

“I like him a lot. I like everyone a lot. I was happy to sit back, play my part and do the odd backing vocal.”

Writing songs could happen but we’re enjoying no pressure

Both suggest they might write original music together in the future.

Coxon says: “I’ve thought about how it would go and what direction it would be. I’d be up for putting some demos forward.”

“But at the moment we’ve enjoyed having no pressure to do that kind of stuff. We’ve enjoyed treating it more like the way DJs put together a set. It’s a different approach and one thing that sets us apart in a way.

“We could go down the road of doing songs but I personally like the idea of digging up music from the past. I’ve started writing a new Muse album as well.

“I started writing when all the protests and all the chaos were kicking off. It’s a weird thing to say but it suits the music I write. It keeps you a little bit on edge.”

Coxon believes the past few years have been his most productive personally.

As well as doing soundtracks for two seasons of Channel 4’s The End Of The F***ing World and music for Netflix’s I Am Not Okay With This — the latter as as fictional Eighties indie band Bloodwitch — he has recorded with Bastille and with Duran Duran on their new album. 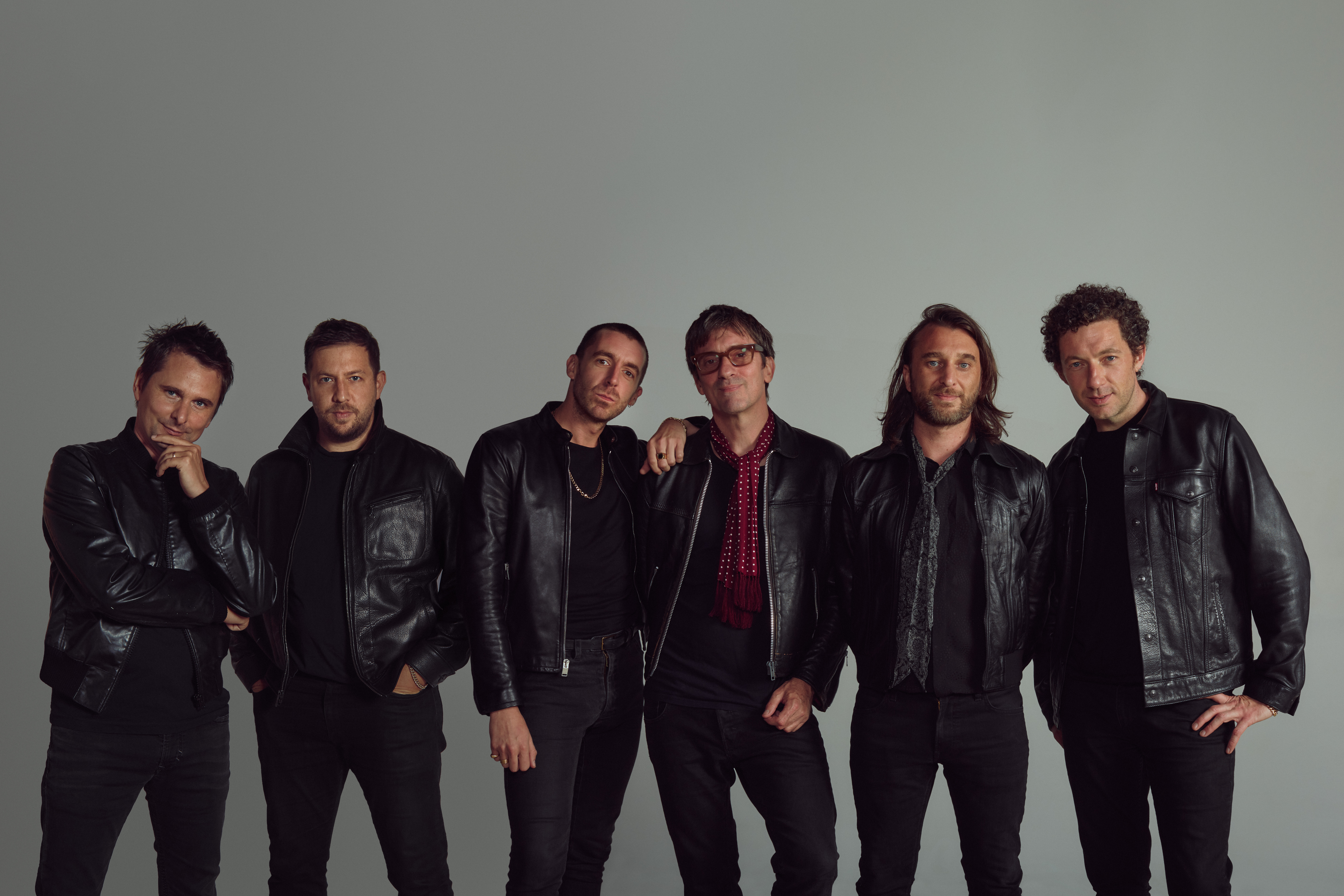 And what of Blur?

“Everyone is just doing their own things at the moment,” he says. “The Jaded Hearts Club was what I was doing and getting ready to play more shows.

“I hope we get to play more live gigs next year.

“I’m looking forward to getting closer to everyone because this thing should be in front of an audience. These are emotional songs with amazing choruses you can sing along to and dance.

“There’s a nostalgia with the songs and they’re perfect for festivals too.”

Bellamy is also looking ahead. He says: “If we keep researching and find another batch of tracks, I am sure we will do another record at some point. I like the idea the gigs are going to be like parties.”

Coxon continues: “This has been great fun but it isn’t just for a laugh. It’s been a serious project and so I’m looking forward to it being ongoing, if they don’t sack me.

“I’m looking forward to having more experiences with these boys and getting to know everybody and seeing where it goes. It’s really exciting.”

You’ve Always Been Here by The Jaded Hearts Club is out now.