Katina and Olajuwon from Married at First Sight have hit another speed bump in their relationship, and this one has nothing to do with her disinterest in cooking. A teaser for the March 16 episode of the Lifetime reality series shows Olajuwon blowing up at his wife after he discovers a dating app on her phone.

In the clip, which was shared on Twitter, Olajuwon notes that he and Katina have “great chemistry.” But he’s recently noticed something about his wife that gives him pause. She still has a dating app on her phone, and that bothers him – a lot.

The issue of the app appears to come up during a dinner with the other Married at First Sight Season 14 couples. But Olajuwon doesn’t want to get into what’s upsetting him in front of the group.

“If I address it right here on camera, it could get ugly,” he says.

For her part, Katina is baffled as to what has her husband of a few weeks so upset.

Katina defends herself in an argument with Olajuwon

“There was a dating app in my phone,” she says in a confessional. “I literally forgot that it was even there.”

That explanation doesn’t hold water for Olajuwon, who sees the fact that Katina still has the app as “spit in my face.”

“If I had this on my phone, would you think this is f***ed up?” he angrily asks her. He then calls her a stranger and says he has had to put faith into a woman he doesn’t know. He adds that he deleted any dating apps when he got married in order to demonstrate that he was ready for a serious relationship. Now, he’s wondering if Katina has made the same commitment.

Even when she and Olajuwon have butted heads in the past, Katina tends to maintain an even-keeled attitude. But Olajuwon’s comments this time were more than she could handle. She pushed back when he accused her of rolling her eyes, and then angrily removed her microphone as she seemed to walk away from the cameras.

Is divorce on the table for the ‘Married at First Sight’ couple? 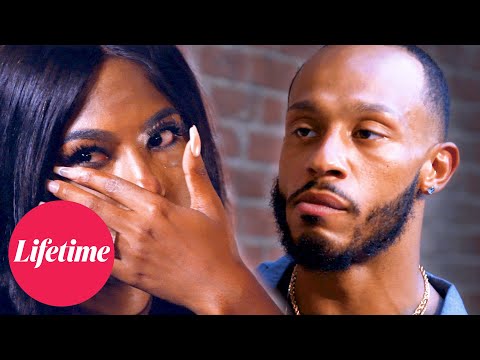 The fight about the dating app isn’t the first big conflict for Katina and Olajuwon. His expectations for his wife – which Dr. Viviana Coles called “archaic” – have already caused problems for the couple. In the March 9 episode, the pair’s conversation with Coles had Katina in tears. She confessed that Olajuwon’s persistent criticisms left her feeling like she “wasn’t good enough.” Meanwhile, Coles warned Olajuwon that if he didn’t let go of some of his outdated ideas about marriage, he was going to end up divorced.

Despite their challenges, Katina and Olajuwon seemed to move forward later in the episode. When she organized a movie night at home for him, it put a huge smile on his face. But that might not have been enough to address their underlying issues, especially given Olajuwon’s fear that Katina is not committed to the marriage.

“I don’t like to use the word divorce,” he says in the teaser. “But if you want to be out there looking for yourself, then you don’t need to be on Married at First Sight.”