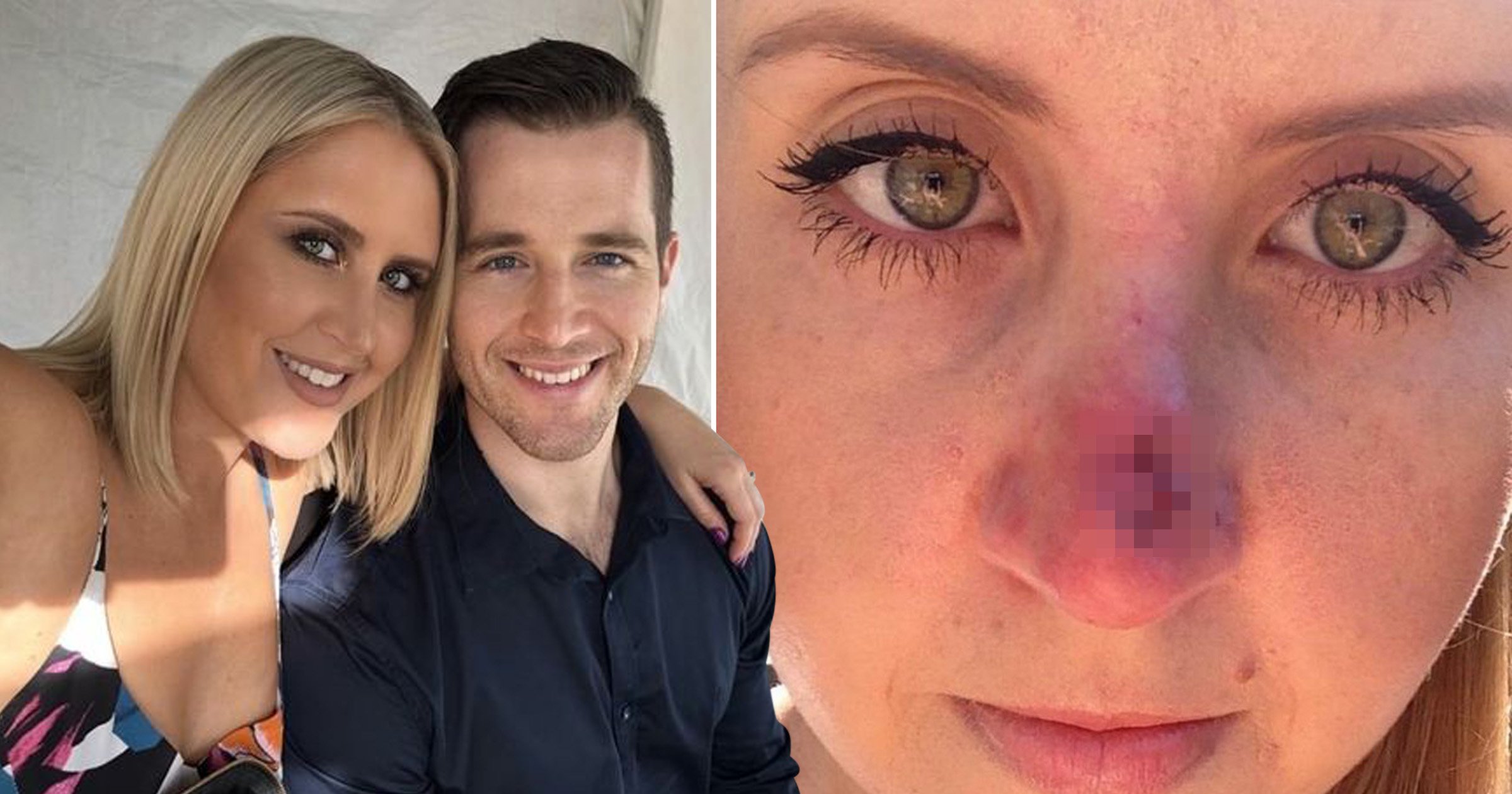 Married At First Sight Australia star Lauren Huntriss has revealed how a suspicious pimple on her nose turned out to be skin cancer.

The reality star, who was paired with Matthew Bennett on the programme, opened up about her health scare in a post on Instagram.

Lauren shared the graphic snaps to social media in 2019, which is when Season six of MAFS Australia first aired.

The make-up artist only discovered she had skin cancer after she went to the dermatologist to ask about her acne.

The expert spotted the pimple on her nose and after investigating it, he realised something wasn’t right.

In a lengthy post along with the pictures, Lauren began: ‘Let’s talk skin cancer. I first noticed what looked like just another pimple on my poor face so I kept picking and picking but it just wouldn’t go away.

‘A few months later I noticed it had grown a bit and started looking more like a wort. Again I would pick but this time it kept bleeding.

‘Funnily enough, I decided to make an appointment with a dermatologist to talk about treatment options for my acne…

‘On observation the dermatologist noticed this spot on my nose. He said it looked suspicious so took a biopsy. Results came back and guess what?… it was a skin cancer! ‘But I’m only 27!’ I said at the time.’

Lauren went on to explain that the dermatologist booked her in with another clinic to have the pimple removed before it became ‘malignant’.

She said that even though the spot was small, the cancer had spread quite a distance beneath the surface of her skin.

She continued: ‘I opted for #MOHS surgery (an advanced surgical technique whereby the doctor removes the cancer bit by bit and viewed under a microscope while the patient waits) over a skin graft as skin grafts tend to be very noticeable.

‘Once the cancer was removed I had the amazing Dr Ilias Kotronakis perform #flaprepare surgery to reconstruct my nose after it was left with a nice big hole!’

The TV star, ended her post with a warning to her followers, urging them to keep an eye on their skin.

‘PLEASE if you notice even the slightest change to your skin book in with a dermatologist ASAP! Don’t risk it, don’t wait or it may be too late,’ she pleaded.

Season six may have aired in Australia in 2019, but UK viewers are now only just watching and following the couples as they blindly go into marriage.

Lauren signed up to the show looking for love and she ended up being paired with Matt, who was a 29-year-old virgin.

He lost his virginity to Lauren on the show and viewers were left floored when Matt later revealed that he wasn’t attracted to her.

Things then took a nose dive with the couple after Lauren asked her husband how he felt about swinging parties and threesomes.

Season six has been plagued with drama from the get go and viewers have since seen two cheating scandals unfold.

Sam Ball and Ines Basic were first to betray their partners, meeting up for a hotel hook up after Ines slid into her co-star’s DMs on Instagram, while late arrival Dan Webb turned the head of Jessika Power.

Jess and Dan were seen secretly kissing at a dinner party, before making plans to meet up behind their partners’ backs following their home stays.

Married At First Sight Australia is available to stream on All 4.