LITTLE MIX and Anne-Marie’s collaboration has been thrown into jeopardy — after being in the works for years.

I told on Monday how the pop trio and The Voice coach were finally teaming up for a song and were due to shoot the video that day. 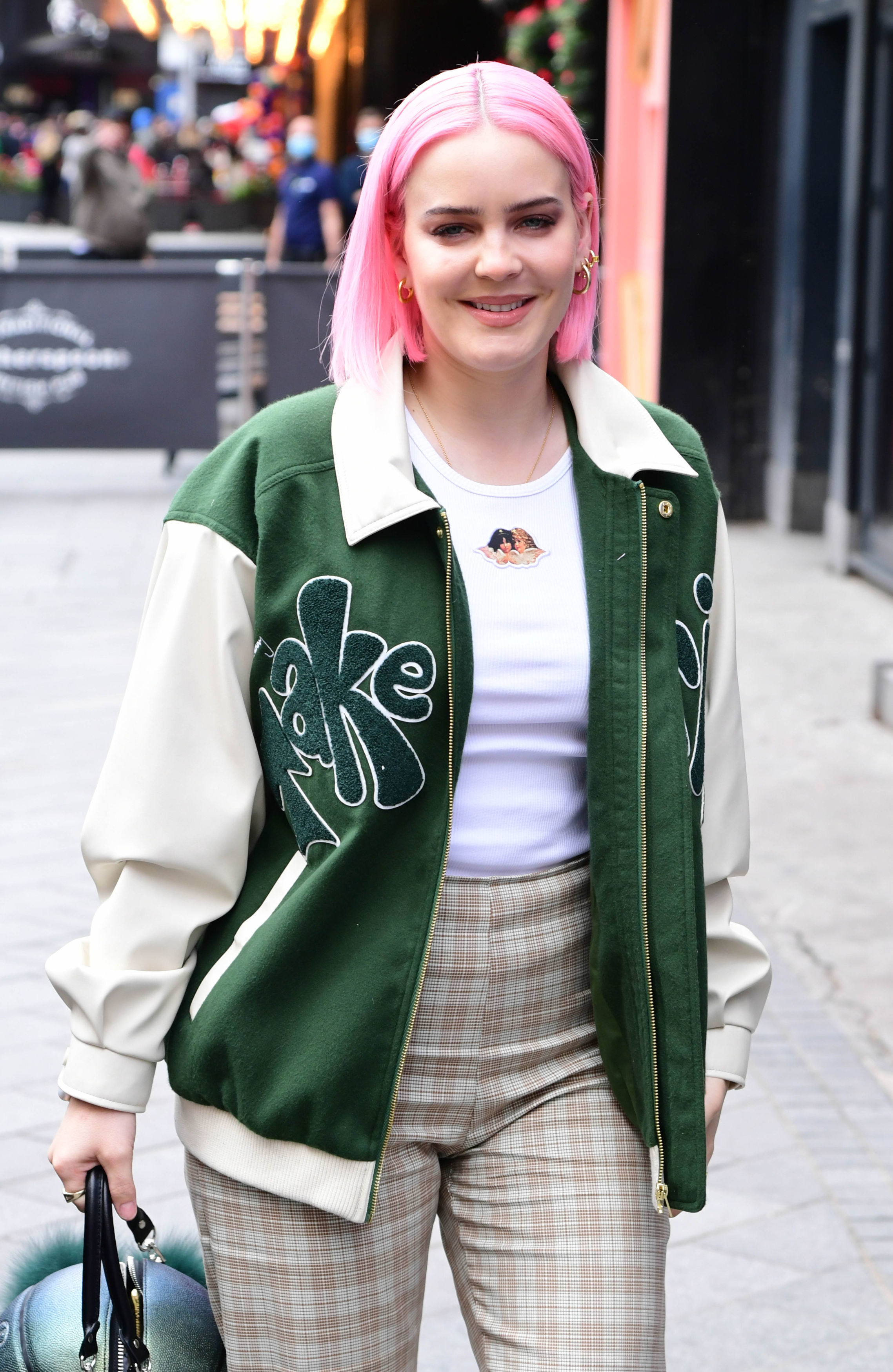 But I have now learned they had to cancel the shoot at the 11th hour after a crew member tested positive for Covid.

And with Leigh-Anne Pinnock and Perrie Edwards both several months pregnant, they are being extra-vigilant.

Their teams are now scrambling to find a new date for the video, but given their hectic schedules, that won’t be an easy task.

A music insider said: “Little Mix and Anne-Marie were supposed to be shooting the video for their new single on Monday.

“But just hours before, one of the crew tested positive for Covid, meaning everything had to be cancelled.

“Perrie and Leigh-Anne being pregnant means it’s even more of a worry for them. 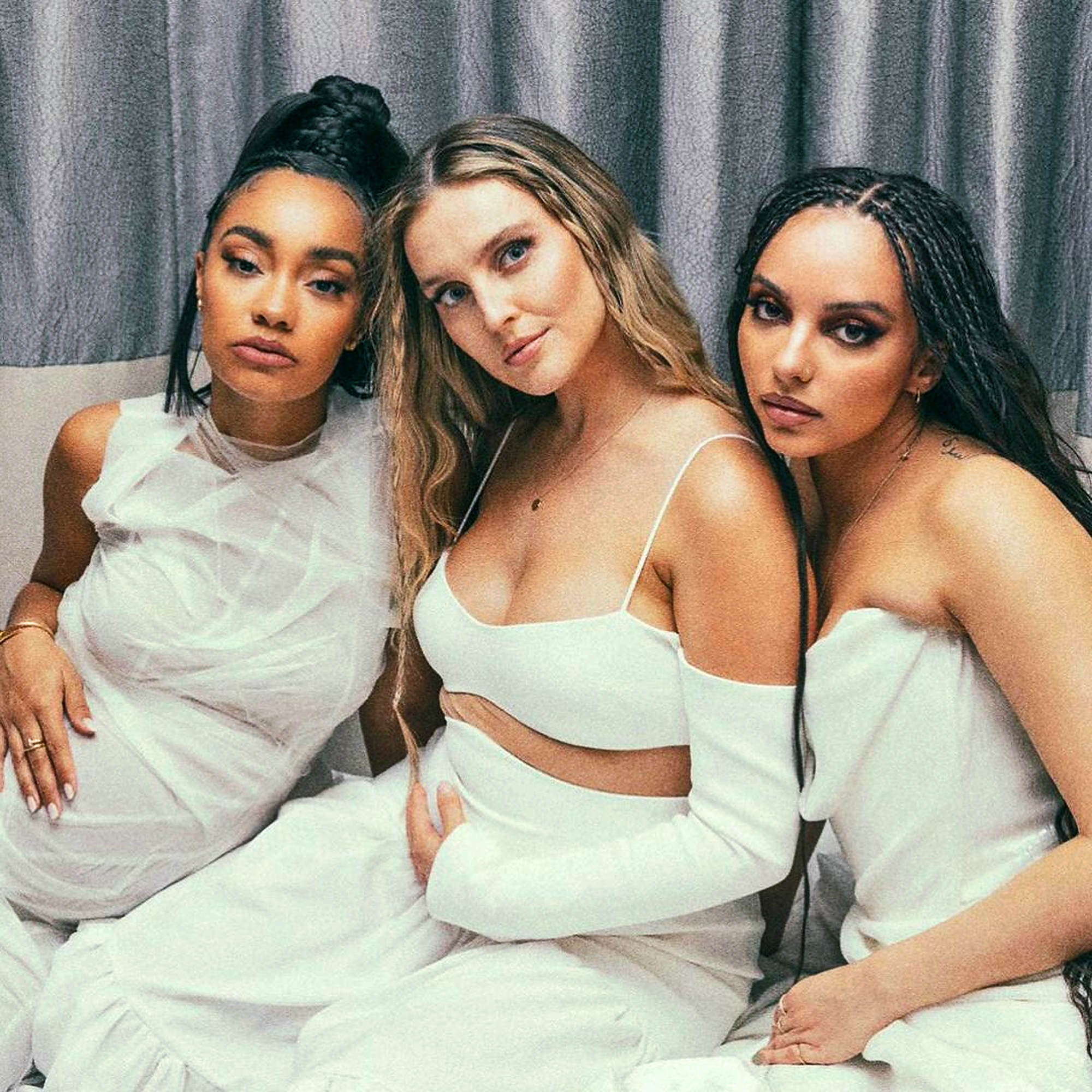 “All the shoots are done in the most Covid-secure way possible, so this positive test being flagged up shows, thankfully, that all the precautions in place are working.

“Anne-Marie and the Little Mix girls were all gutted they had to call off the shoot.

“Their teams are looking at their diaries now to see if there is another time they are all free and able to make the video happen.

“It would be a real shame if this great single doesn’t get a video.”

Details about the track remain a closely guarded secret but it had been expected to be released next month, as it is believed to be on Anne-Marie’s new album Therapy, which is out on July 23.

Anne-Marie has been good friends with the Little Mix ladies for years.

She recorded a podcast with Jade Thirlwall last summer, and Leigh-Anne joined her as a guest mentor on The Voice earlier this year.

She teased a link-up with the band in November and said of the trio: “I love harmonies.

“I’ve always had to do my own so it will be nice to have them do it with me all at once.”

So you wannabe pals now, Posh?

VICTORIA Beckham absolutely does not want to reunite with the Spice Girls, all right?

She wants no part in the cheeky pop band, and would like it very much if nobody ever asked her about it again, so she can focus on extraordinarily expensive clobber worn by about eight tremendously smart women in Chelsea. 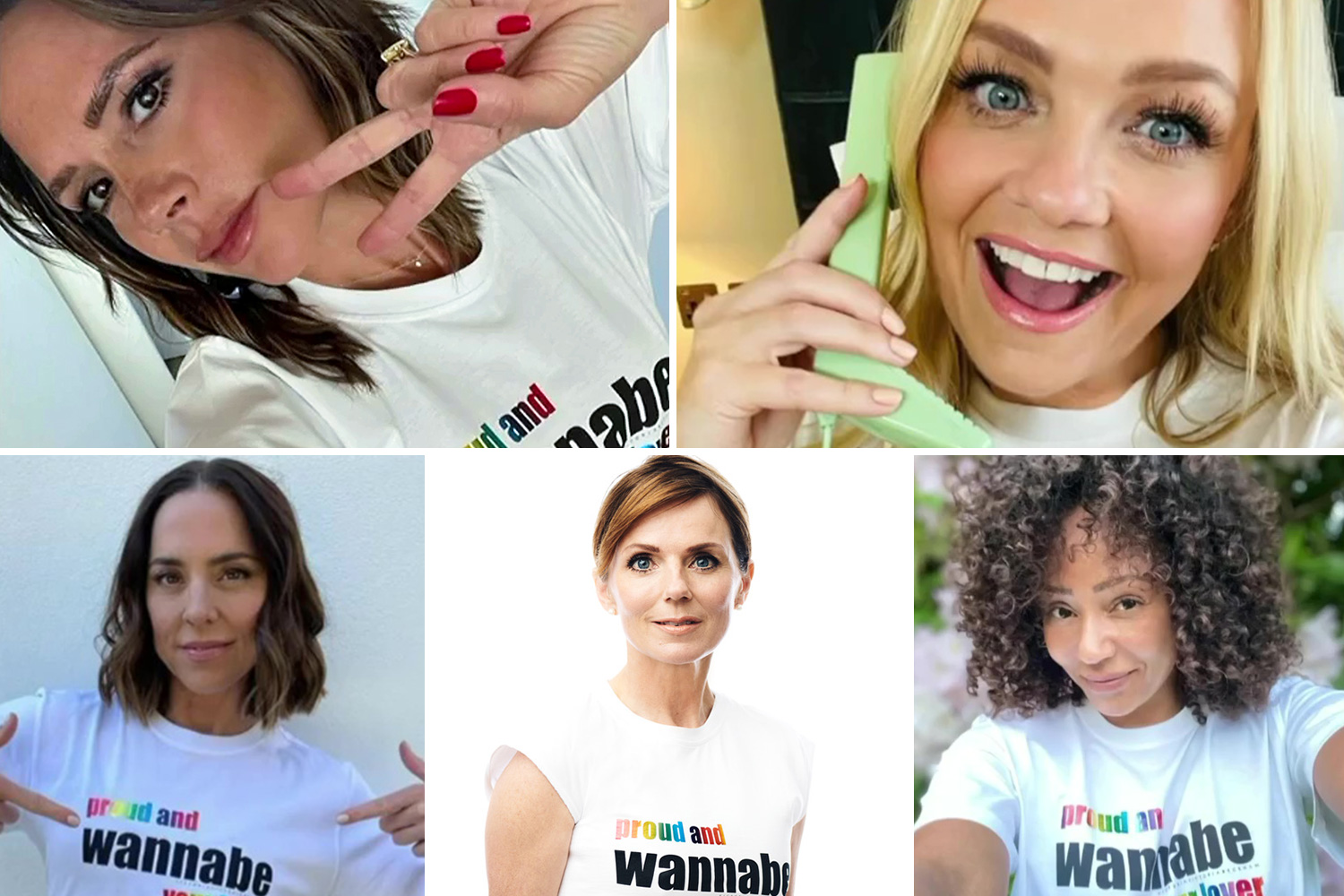 What’s that Victoria, you want a load of attention for your virtue-signalling charity fashion range? Hold on . . . it’s time for a re-think.

Let’s start again, Victoria Beckham is desperately excited to be teaming up once again with, you guessed it, the Spice Girls!

After mysteriously misplacing her mobile phone and presumably ­getting lost on her way to support her four bandmates at their hugely ­successful reunion two years ago, Posh decided yesterday that she really wants to be part of their ­internationally successful franchise again – roping in her “pals” to model her £80 white T-shirts adorned with the slogan Wannabe after the girl group’s biggest hit.

Fellow singers Geri Horner, Mel B, Mel C and Emma Bunton each posed up in the pricey kit to show their support for the range, which is to benefit the Albert ­Kennedy Trust for Pride month.

Naturally the unveiling quickly spread far and wide with articles ­popping up across the web – ­including from fashion bible Vogue as Victoria announced: “Pride to me is a celebration of being completely yourself, and this year’s T-shirt is a reminder of that.

“The Spice Girls really championed accepting yourself and others, being kind and having fun!”

With all that in mind, it’s hard to understand why she wanted out of the band so badly.

Now of course, I’d never knock a charitable fundraiser for a great cause and 100 per cent of the ­proceeds will go to the organisation . . . unlike last year when she was criticised over a similar £95 top which only paid out 25 per cent to good causes.

And better yet, now she’s found the other girls’ numbers again, there’s presumably no excuse not to join in next time around, right Victoria?
Victoria . . . ?

ARMIE Hamer has reportedly checked into rehab for “drug, alcohol and sex issues” following a series of shocking allegations against him.

The US actor has been accused of rape, which he strongly denies, and of being a sexual cannibal, which he dismissed as “bulls**t” back in January. 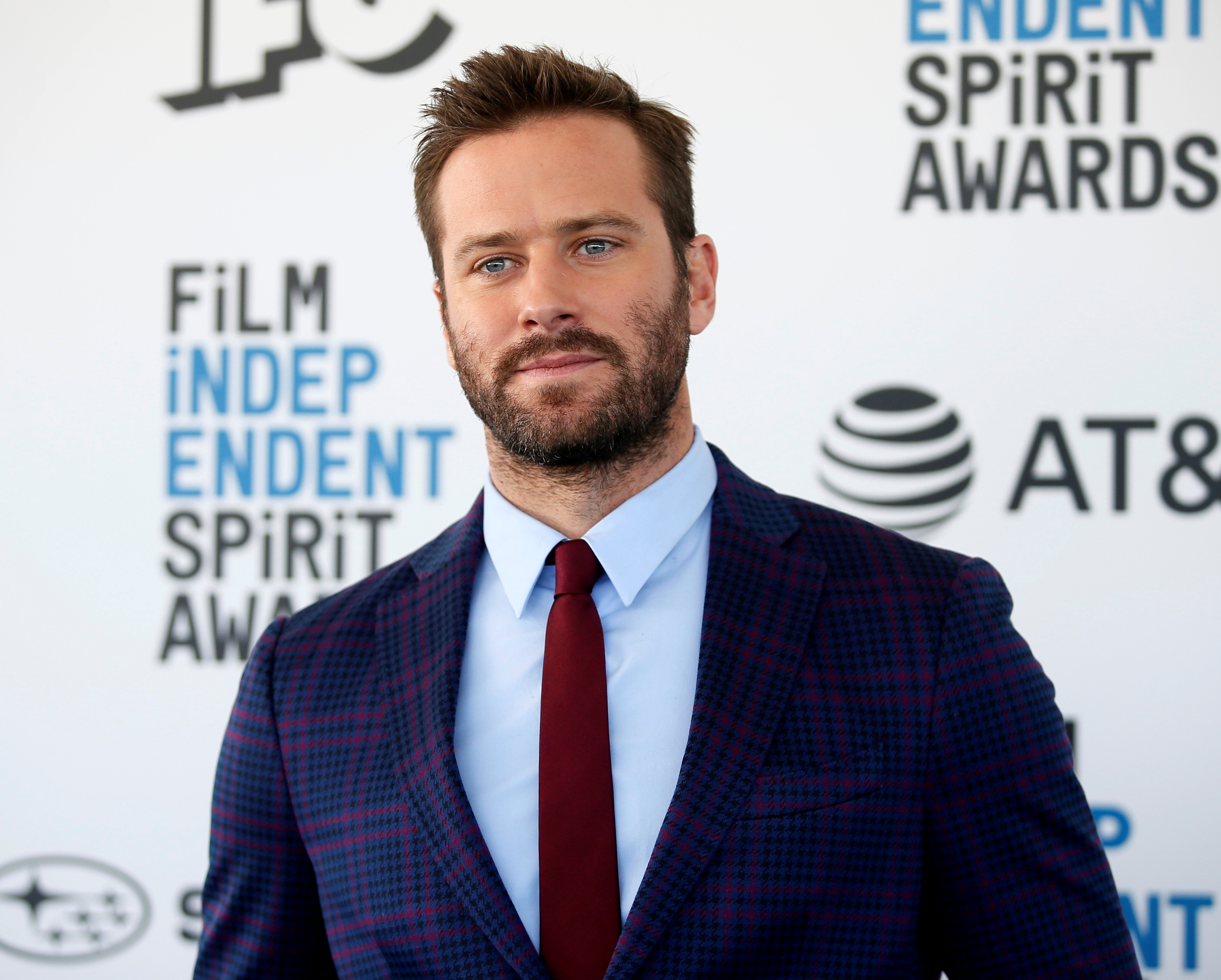 But after a turbulent year he is believed to have flown to Florida from his home on the Cayman Islands in the Caribbean to get help.

Since the scandals, he has been dropped from a series of upcoming jobs, including Cold War thriller Billion Dollar Spy, TV series The Offer and Broadway play The Minutes.

The Call Me By Your Name actor also stepped down from new Jennifer Lopez film Shotgun Wedding.

Lewis has reel treat for fans

LEWIS Capaldi has given cameras an all-access pass to his life for a new documentary.

The film, which is yet to be given a title, was announced yesterday and will follow his rise to global stardom and the making of his second studio album, due out next year. 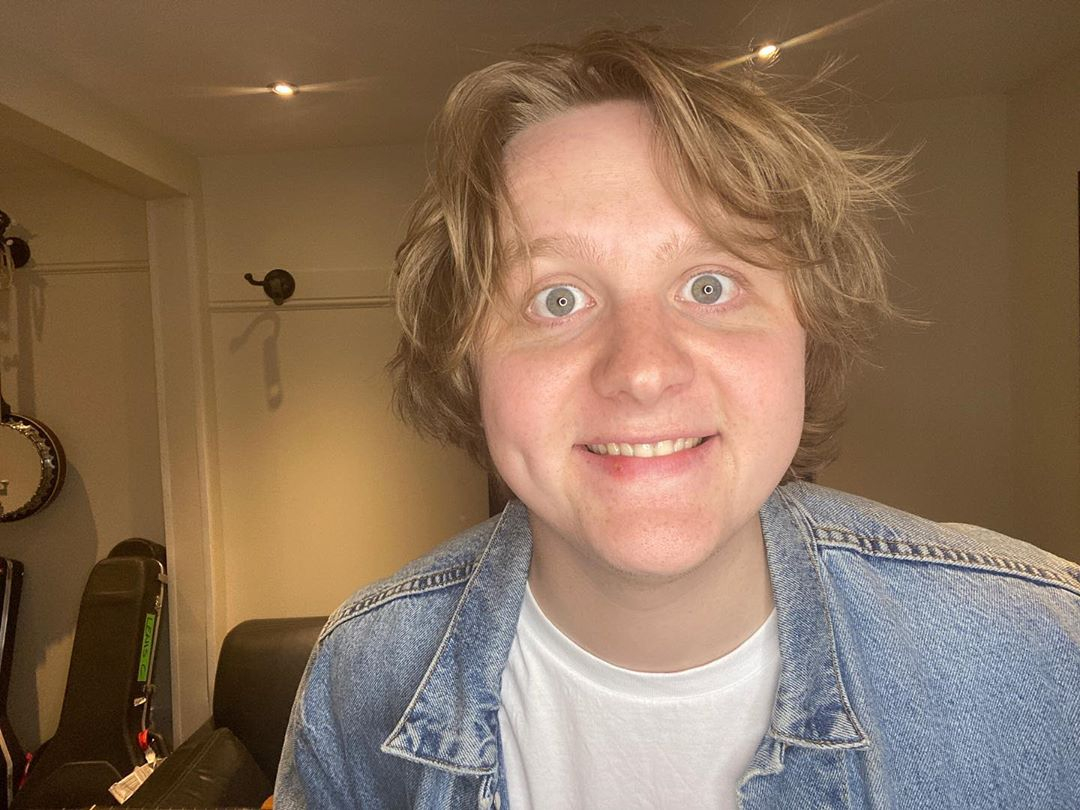 Lewis said: “If the immense pressure of writing and recording a second album – which has to live up to the expectations of so many people I’ve never met while also attempting to eclipse the commercial success of my previous album – wasn’t enough, I decided to film the process in its entirety for your viewing pleasure.

“I’m very excited to potentially capture the making of the best album of all time or, more likely, to permanently document the scorching of my dreams as years of my life’s work is received like a pile of flaming s**te.

"Either way it’s going to be lots of fun and it will be lovely to have people along for the ride.”

I’VE been wanting to do away with masks for months, but if this look from Megan Thee Stallion is a compromise, then maybe I could get on board.

The American rapper posed in a sexy nurse’s outfit, with her bum on show, to promote her upcoming single Thot S**t. 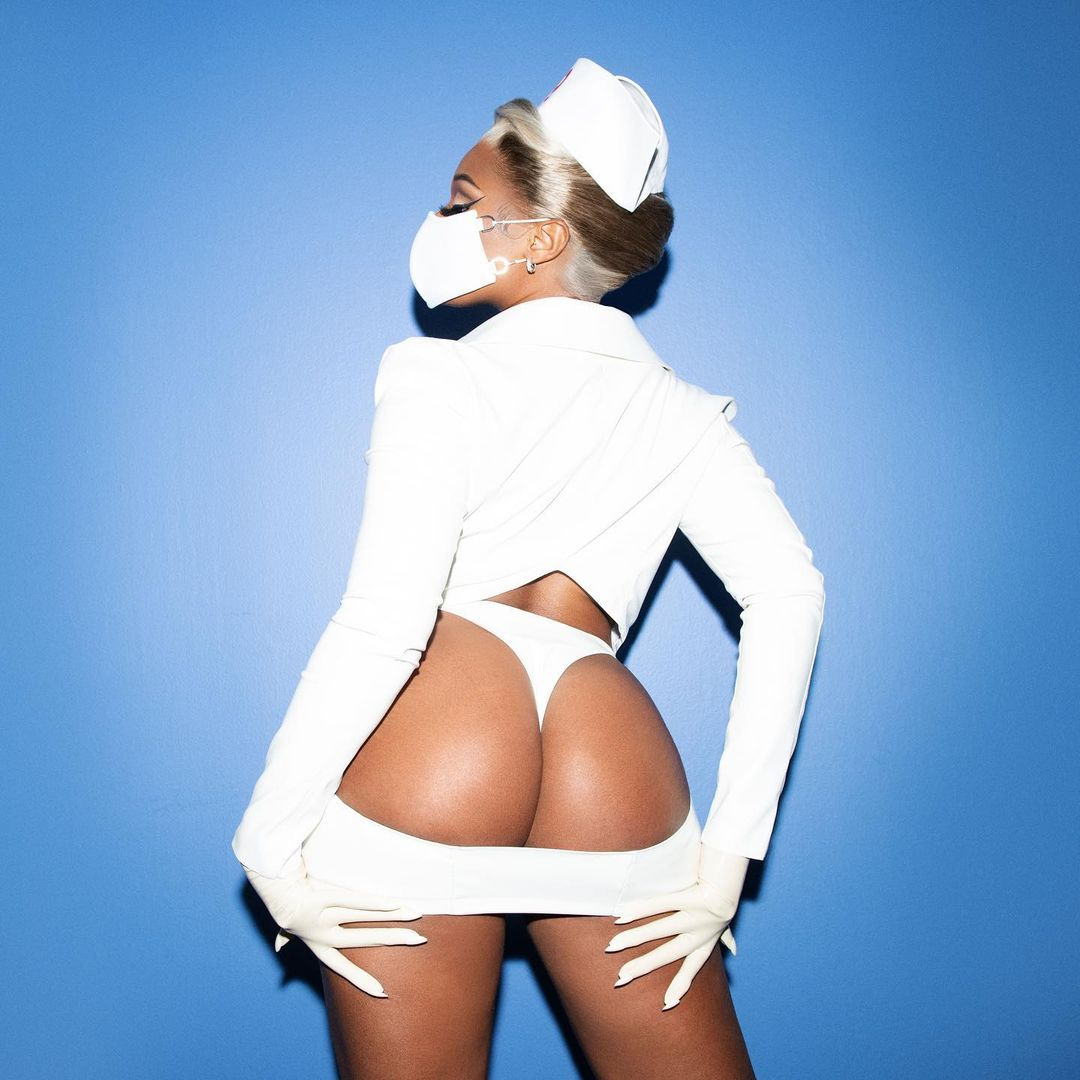 Megan posted the pictures of herself on Instagram on Wednesday with the caption: “3 MORE DAYS UNTIL #THOTS**T DROPS.”

Earlier this week she said she would be stepping back into character as her alter ego Tina Snow on the track, out tomorrow.

Speaking about the song’s meaning, Megan said it “celebrates women unapologetically enjoying themselves, doing whatever they want, when- ever they want, no matter what the critics have to say.”

JAMES Arthur may find it a bit awkward singing his new single because it seems to be all about his girlfriend – who he has just split up with.

I told last month how things had ended between the singer-songwriter and his dancer partner Jessica Grist, who he began dating in 2012. 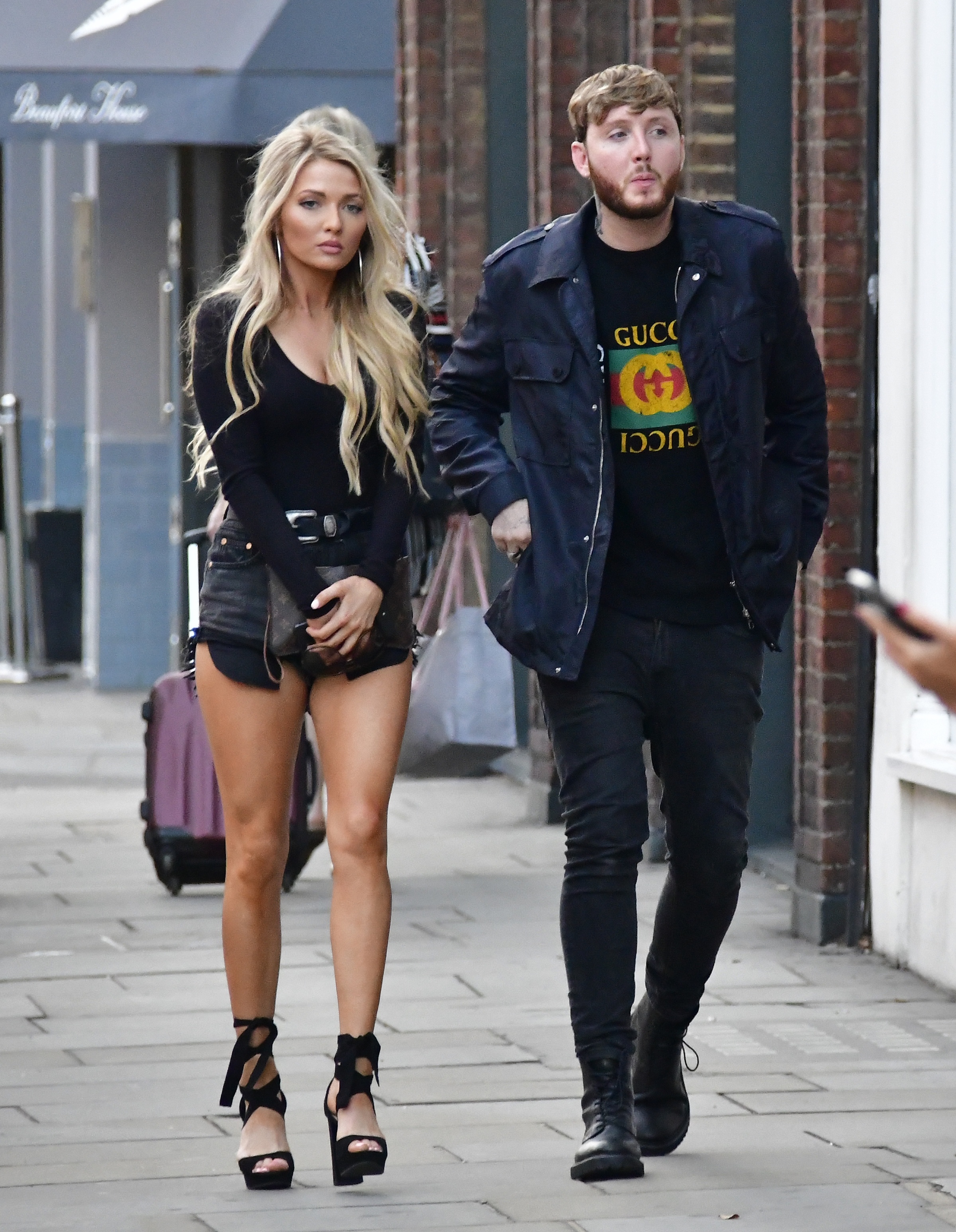 But on his new song ­September, which comes out tomorrow, he could barely be more gushingly positive about her.

He sings: “You’re all my strength and my ­weakness, you battle my demons, you’re still undefeated. Sometimes I get a little bit jaded, too much pressure just to make it.

“You smile when I’m angry and I hate it, but I’ll still love you for the rest of my life. My crush on you has never faded, let’s go back to bed until we break it.

“I’m gonna love you for the rest of my life. If you wanted to, I’d start a family with you.”

It is another emotional track from James, which is what he does best.

But I can’t help but feel it may not be too fun singing it all the time now he and Jessica have gone their separate ways.

Speaking during a TikTok Live, he said: “I always take inspiration from my own life and my own ­journey.”

He may want to rethink that next time he’s ­writing a tune.

MIMI WEBB has become a modern-day good Samaritan as well as a hit pop star.

She is currently at No10 with her brilliant song, Good Without, and stepped in to help last weekend after a busker in her home town of Canterbury, Kent, was targeted by a group of yobs who kicked over his day’s earnings. 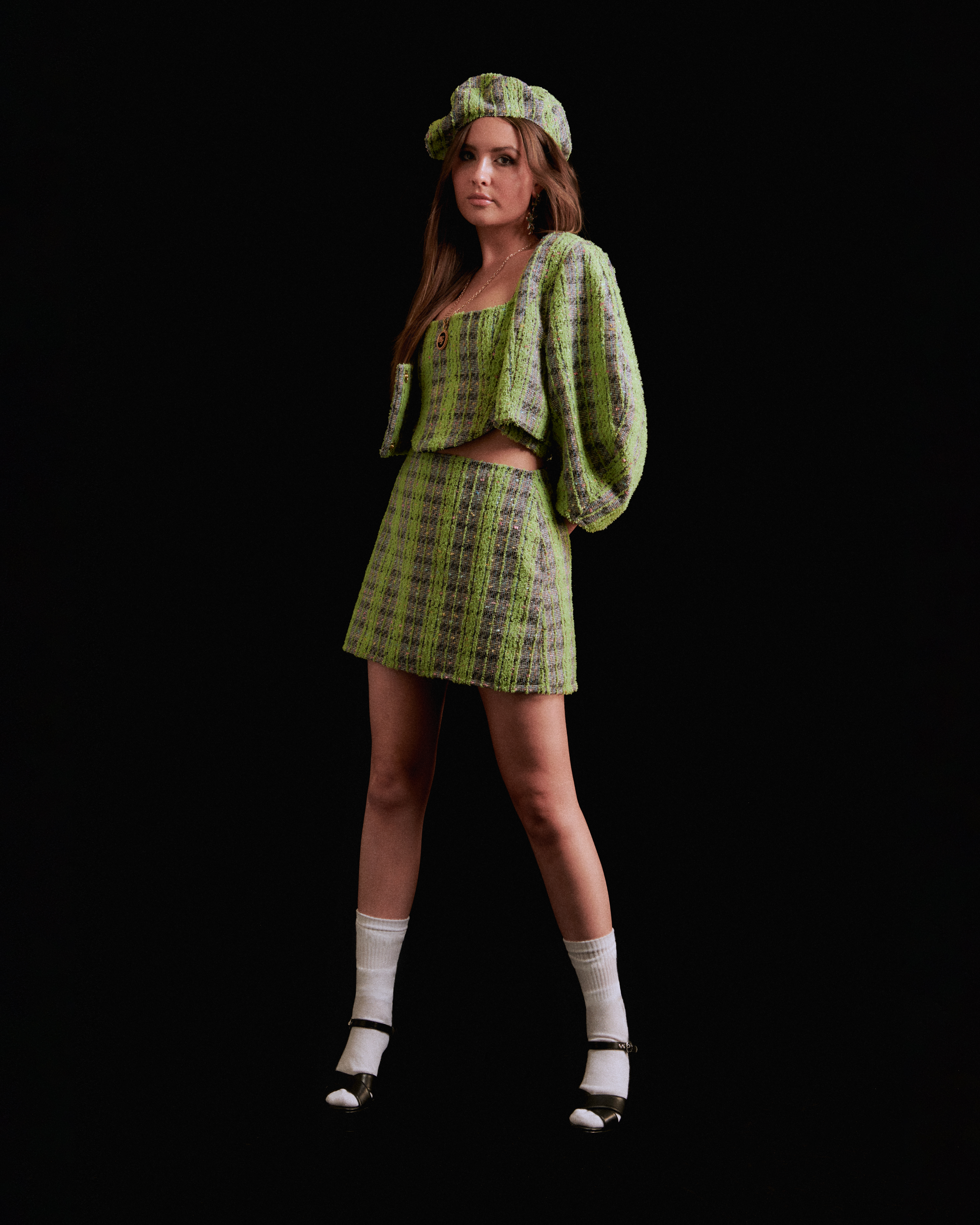 The singer-songwriter said: “I was out with friends and saw a commotion.

“I realised the busker’s money was all over the floor so I ran to check he was OK and gave him some money.

“He was lovely. A passer-by recognised me and he also helped out.”

Mimi will go far with an attitude like that.

AFTER launching their single from the International Space ­Station back in May, Coldplay want to go a giant leap further. 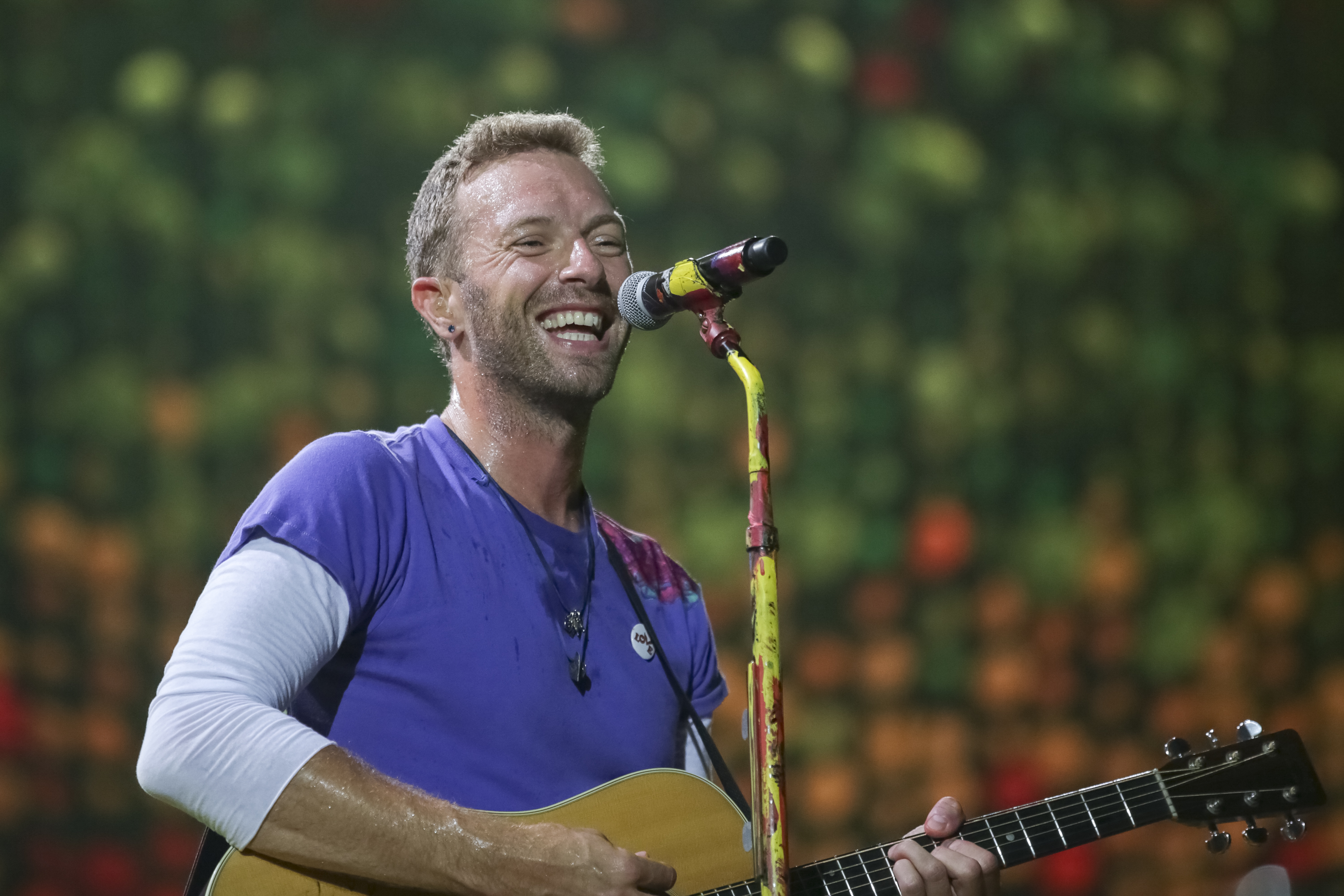 Frontman Chris Martin would love to perform on the moon but there’s just one snag – he fears no one will be able to hear it.

He said: “Not many people have done it, that’s true. But isn’t there an issue that if you play on the moon no one can actually hear? I am ­confused about the atmosphere.”

He told the Zach Sang YouTube show: “We would try anything twice. I don’t mind any ridicule as I just speak what feels true to me. That is what we all have to do.”