Riley Stearns is writing and directing 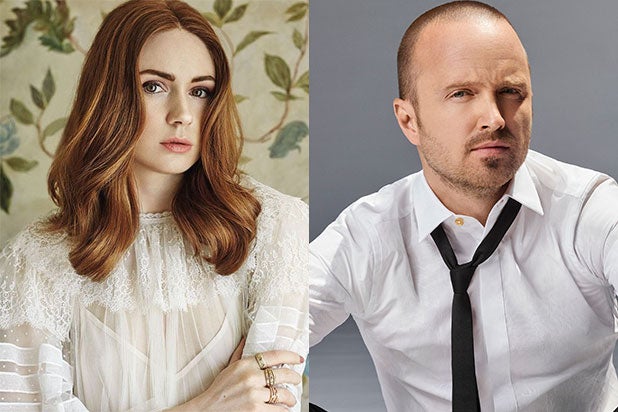 Karen Gillan and Aaron Paul have been cast in Riley Stearns’ satirical sci-fi thriller “Dual,” it was announced on Tuesday.

Jesse Eisenberg, Beulah Koale and Martha Kelly will also star in the movie for which Stearns wrote the script. Stearns will also produce alongside XYZ Films — XYZ is handling global sales and will co-represent US sales with CAA Media Finance and UTA Independent Film Group. Production is set to begin later this summer.

“Dual” will follow a woman who received a terminal diagnosis and then opts for a cloning procedure for her friends and family to cope. However, she makes a miraculous recovery, but her clone has already been commissioned into the world.

Gillan’s credits include “Jumanji: Welcome to the Jungle” as well as “Jumanji: The Next Level,” and “Guardians of the Galaxy” and “Avengers: Endgame.” She also most recently wrote, directed and starred in “The Party’s Just Beginning.” She will next be seen in “Gunpowder Milkshake.” She is represented by UTA, Troika and attorney Darren Trattner.

Paul currently stars in the third season of HBO’s “Westworld.” He is best known for his role as Jesse in “Breaking Bad,” which he reprised in “El Camino: A Breaking Bad Movie.” He was also most recently seen in “Triple 9.” He is represented by UTA and Viewpoint.

Eisenberg’s most recent credits include “Zombieland: Double Tap,” “Vivarium” and “Resistance.” He is also known for his roles in “The Social Network” and “Zombieland.” He is represented by CAA, Felker Toczek Gellman Suddleson and Viewpoint.

Stearns wrote and directed “Faults,” which starred Mary Elizabeth Winstead, as well as “The Art of Self Defense,” which starred Eisenberg and Imogen Poots. Stearns is represented by CAA and Grandview.