GMB: Katy Rickitt gets interrupted by alarm during report

During Tuesday’s Good Morning Britain, ITV hosts Adil Ray and Ranvir Singh took over hosting duties while regular presenter Susanna Reid took some time off for half term. However, things soon took a turn when the camera panned to Katy Rickitt, who was presenting her sports segment about the England 2020 Euro squad via video link.

As she was presenting the sports news from Middlesbrough, Katy got interrupted by a rather loud alarm, which was going off behind her.

Addressing what was going on behind her, Katy began: “Yes, the alarm you can hear behind me could be Gareth Southgate’s alarm to announce his so-called unlucky seven.

“He’s left it right to the wire to announce who is not going to be in the squad and who is.”

A voice on a tannoy then began to speak loudly as Katy tried to continue with her report. 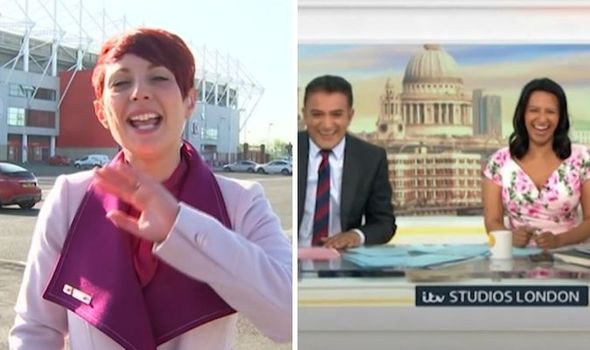 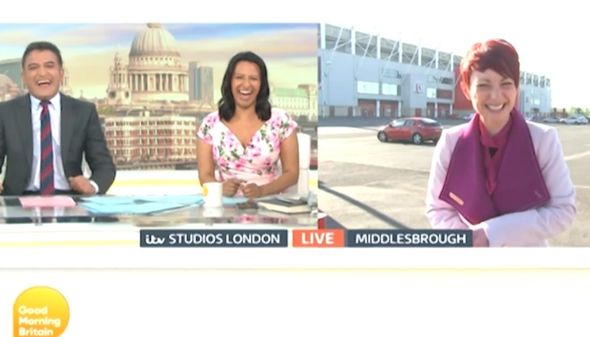 “Harry McGuire is in doubt due to injuries,” she explained shrugging off the background noise. “Trent Alexander Arnold and James Ward-Prowse could be among those left disappointed.

“For the rest of them, it’ll be straight down to work with their first friendly match against Austria tomorrow night.”

“Nice work there Katy,” Ranvir praised. “Weaving in a distraction into your script at the last second.”

Adil chipped in: “Is it alright over there? It’s like the sirens going off. Do you evacuate the city or something?” 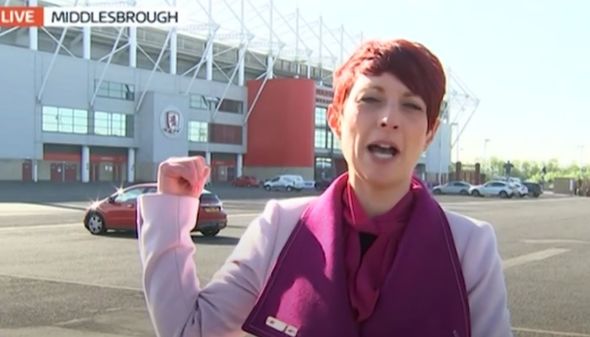 “It’s fine,” Katy replied as she apologised for the distraction. “We have been told it is a drill. It is just a little annoying, I’m sorry.”

Just as Katy had finished her sentence, the alarm started to sound even louder.

Katy joked as the segment came to an end: “Time is running out, Gareth. Come on.”

Elsewhere in the programme, things got rather heated during a debate when guest Dominique Samuels called Adil, psychotic.

The comment came as they discussed whether they would invite someone over to their house that had chosen not to get the COVID-19 vaccine.

Nick Hewer, who also appeared via video link, told the hosts he would not feel comfortable having someone at his house who hadn’t been vaccinated.

Adil, who seemingly agreed with Nick, had a difference of opinion to Dominique who said no one should have a say over anyone else’s life.

“I just think you don’t need to be psychotic and try and control other people’s life choices,” she told Adil.

As Dominique tried to continue with what she was saying, Adil shouted over her to grab her attention.

“Dominique, Dominique, I’m sorry but you can’t just be extreme,” he raged. “Nothing I have said there is psychotic, what have I said that is psychotic?

“What on earth is psychotic about caring for people around you? How does that make me psychotic?”